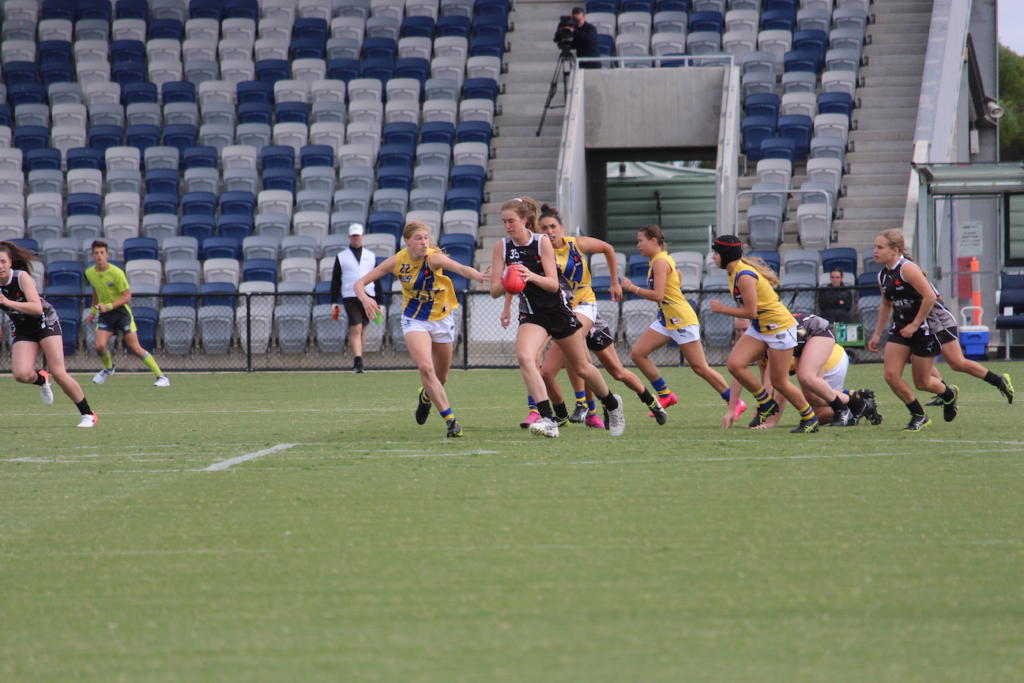 GREATER Western Victoria (GWV) Rebels’ Maggie Caris is on the verge of following her sister Rene into the AFL Women’s competition, after the AFL Women’s National Academy member received a Draft Combine invitation earlier this month. While the lockdown period that ended her top-age year might have worried the talented ruck, she was grateful to have her sibling alongside her back in Quantong.

“It’s really been handy, especially having Rene home in lockdown just to train with and she gives me some insights which I’m really happy to have,” Caris said. “Going through the pathway and the Academy and things. “I think she’s given me some insights that if I didn’t have her I wouldn’t have known, so I’m really happy to have someone with information that she has.”

“My sister (is my inspiration),” she said. “It’s great to see how she’s improved just from her time and just how she’s been able to make her way through the pathway which I think has been really awesome for her.”

Caris in her own right is an incredibly talented sportsperson, making every Victorian state netball team since 2016 across the age groups of Under 15s, Under 17s and Under 19s, as well as retaining her place in the Australian Junior Netball Team over the past few years, currently in the Under 21s national squad.

The 189cm draft prospect is fairly new to football compared to most, joining the local competition in Horsham – which is only 15km east for Quantong – and then enjoying a successful era with Ballarat Grammar where she boarded. But prior to her boarding, Caris had specifically focused on round ball sports.

“Originally in my very junior days I was a bit of a basketballer and a netballer,” Caris said. “Just the usual sports kid trying everything, as you do. “I started playing footy when the female football league in Horsham started up at my local club, one of the first clubs to form a team. “So that was really exciting and to be part of the inaugural Deakin Female Football League here. We ended up winning the premiership which was really exciting.”

“Between that and playing the one game of girls footy at school a year, that’s sort of where my interests started,” she said. “Then my sister started playing football and she eventually started playing for Geelong so obviously I just started following in her footsteps and when I moved down to boarding school in Ballarat Grammar, the interest really started to develop there as they have a really big culture there in Ballarat. “The GWV Rebels have a team which I trialled for and eventually got into. From then on, I just started to develop my football and that’s how I sort of got to there.”

At Ballarat Grammar, Caris played first in a losing Herald Sun Shield Grand Final at GMHBA Stadium, before winning last year’s final at Highgate Recreation Reserve. As many dual-sport athletes try to do, Caris has been juggling both her football and netball with great success.

“It all comes down to communication and just trying to keep a balance which it can be difficult at times,” Caris said. “But I’m really lucky to have really great coaches in both programs and S&Cs (strength and conditioning) that are able to structure my programs so I’m able to maximise my training in both areas to allow for as much development as I can in each respective sport. “I don’t have hours as such, more just allocated times and making sure I’m not overdoing it with too much here and there. “I’m really lucky to have really great support staff around me.”

Hailing from the Horsham region Victoria’s west, Caris has to hit the road for long periods of time which has meant plenty of travel over the years, but she is thankful her family are on board and supportive.

“I’ve been playing for state netball and things since I was about 12-years-old,” Caris said. “Me and mum used to drive to Melbourne to do a 800km round trip from my home town of Quantong which is 15km west of Horsham. “We’ve been doing trips there up to Melbourne and back for many years now so moving to Ballarat made things a lot more easier and a little bit less travel which was nice. “Travelling to Melbourne for training is obviously there, and we have lots of national competitions so I’ve gone to Adelaide and Queensland so yeah it keeps me busy.”

A number of AFL Women’s talents have dual sports they balance across the year, and Caris hopes to do the same with her netball coexisting alongside her footy.

“That would be the ideal situation to play both for as long as possible,” Caris said. “I really feel that netball and football both together provide different opportunities that allow me to develop in ways that I haven’t before and I think ever since I started playing football my netball’s developed and I think there’s some components of netball which really helped me to advance my football as well. “I think the pair work really well together so I hope that in the future whatever happens that I might be able to compete in both sports.”

Caris has been able to transition some areas of her netball game into her football, such as rebounding on the court, to her ruck work on the field. Standing at 189cm, Caris was the tallest player in the NAB League Girls and dominated the hitouts all season. Furthermore, being a member of two elite pathway programs, she has been able to build a wealth of knowledge.

It is no surprise that Caris is able to use her height to advantage and it being one of her strengths in her game to get first hands to the ball in stoppages. The Rebels’ ruck’s running ability has also been a feature of her game for her height, and has been a steady improvement over the past few seasons with the NAB League side. While her kicking is her self-proclaimed improvement, Caris is slowly building to have more and more impact around the ground.

Her improvement over the years earned her a place in the 2019 AFL Women’s National Academy, and then again in her top-age year this year, something that “shocked” Caris considering the quality of her cohorts.

“When I first found out in 2019 it was really exciting just to be named alongside girls like Lucy McEvoy and Millie Brown who are obviously exceptional players so to be in the group with them, I was very shocked,” Caris said. “Coming to the next year it was obviously really exciting to be around the plethora of players who are just so talented. “It was a bit unfortunate that we only got to go to one camp but I think just the fact that we did just get the one camp, it showed how talented the girls were and how much more that they have to give.”

Caris is a goal-setter who aims to improve with little facets of her game whether it be football, netball or otherwise. While the NAB League Girls’ abrupt end to the season was disappointing, Caris made the most of her long off-season at home.

“In a game of football or netball, setting myself little targets just little things to tick off every single time,” Caris said. “How many intercepts in netball or footy or how many marks can you spoil, how many hitouts you can get and deliver to your teammates just little ones at a time. “Once I’m settled in something, I set up some longer term goals. “But mostly shorter term goals, especially at home with all the fitness I’ve got to do and skills acquisition.”

Caris thanked the GWV Rebels staff for all their support over the years not just for her, but her family, and enabled her to follow her passion alongside her netball. Now it is a waiting game to see if she can follow her sister into the AFL Women’s next week.