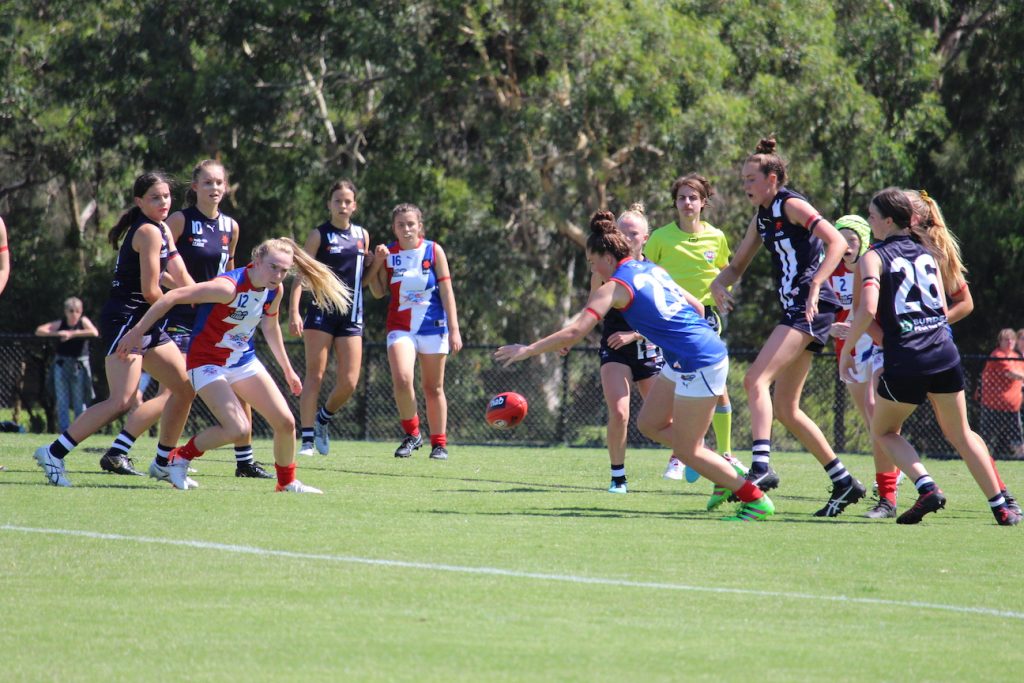 WHEN she first started football, Grace McRae and her father had to “sneak around” behind her mother’s back in order to play the new sport. Eventually her mother caught on and everyone was on board, and now it is hard to keep it a secret after the Gippsland Power midfielder was invited to the AFL Women’s Draft combine. Whilst the combine will not go ahead due to the COVID-19 pandemic, it showed there was enough interest in the teenager that her father made the right choice.

“My friend, it was a local club in Inverloch and they didn’t have enough players and she was playing with them currently, so I asked my dad because I knew my mum wouldn’t let me play,” McRae said. “So I asked my dad if I could fill in for them and play for them for a few games.”

Having come from a basketball and netball background, McRae enjoyed juggling the sports up until recently, representing Dalyston in the netball right until the most recently completed season, and basketball up until she started at Gippsland Power. It took some work to manage her time, but McRae got it done.

“Netball would clash on the same weekend as Gippsland Power. My local football club, which was Dalyston,” McRae said. “They, the netball club let me (play football) if I had a football game on the same day because Gippsland Power varies from Saturday to Sunday. So if Gippsland Power was on Saturdays, I just said sorry I couldn’t play that game. I’d give them a lot of time, like a heads up so they could find another player to fill in.”

“But luckily for me, most of the games where on Sunday. “So my local club, I just have to give them a lot of notice of what games would be clashing. “And then, yeah, they were happy for me to go play footy because they know that’s sport. I really, really love.”

As for juggling other commitments such as studies or work, McRae said it was all about time management and sticking to it.

“You have to definitely designate your certain times like you have trainings at certain times for different sports,” McRae said. “So you gotta make sure like I have free’s at school. “I have to make sure I really use them if I need to stay in at lunch time at school. “That’s what I had to do. “I designate, like, after school times that I know I didn’t have training or work and all games, and I’d make sure I sit down and do that.”

Looking back on her journey through the junior elite pathway, McRae said she has loved every moment and would not change a thing.

“The pathway has been amazing,” she said. “I didn’t expect it. “Honestly, I thought I was just going to play local footy. “So to actually go through the ranks of interleague and then Gippsland Power has been awesome. “They clearly show that you can have a pathway as well, like they say you can from Gippsland Power. “You can get nominated or you go play these kind of like the pathways and they are clearly highlighted to players, which is absolutely awesome.”

McRae is a predominant midfielder who showcases clean hands and hard running, but most of all a competitive spirit. In recent times she has been thrown forward and back throughout games to increase her versatility, but the inside midfielder loves being at the coalface of the contest. Still hoping to develop her kicking – after all she has only 10 games at NAB League level – the AFL Women’s Draft hopeful still has a chuckle about the first training session she had with the Power.

“I was holding the football wrong apparently the whole time when I came into Gippsland Power,” McRae said. “So they helped me fix that. “And yeah, my kicking definitely has improved, but I know I can approve it further.”

An honest conversation with Gippsland Power Female Talent Manager Chelsea Caple and senior coach Scott Armour helped lift McRae’s intensity in her draft year as she set her sights on the elite level.

“I wasn’t expecting like, named into the combine or anything, but I had a chat with Scotty and Chelsea at Gippsland Power and they asked me what I wanted to do and I said, ‘I definitely want to give getting drafted a crack’, but I’d mostly just wanted to have fun. “Enjoy it because it, like it, just goes too fast. “So my goal is definitely to get drafted. “But also just to have fun.”

Having reached the national championships for basketball, won a couple of Most Valuable Player (MVP) awards in the sport, as well as a league best and fairest in the Under 17s despite being two years younger in the age group, it would have been easy for McRae to see her potential in those codes. Instead, she looked to another former netballer who has made the transition into Aussie rules as her inspiration.

“I’m going to say Sharni Layton just because she’s been in netball pretty much a whole life,” McRae said. “And then just to do a 360 and go into footy and just like challenging yourself, I think that that really inspired me just because she she wasn’t 100 per cent sure of footy but she just gave it a crack. “And she’s, she’s loving it, and I I feel like that’s what I look towards as well.”

McRae certainly is loving her football and remembers her debut fondly, marking it as her favourite football memory. In scorching heat at Frankston Oval, the Power went down to Oakleigh Chargers by 50 points but McRae went on to have nine touches and lay an equal game-high eight tackles in the process. She went from strength to strength and has loved the journey.

“The playing group at Gippsland Power, through both years have been excellent, and I think that’s what’s really helped me,” McRae said. “(I) really enjoy … that environment of Gippsland Power and the players I was playing with, we got along as well and it was amazing.”