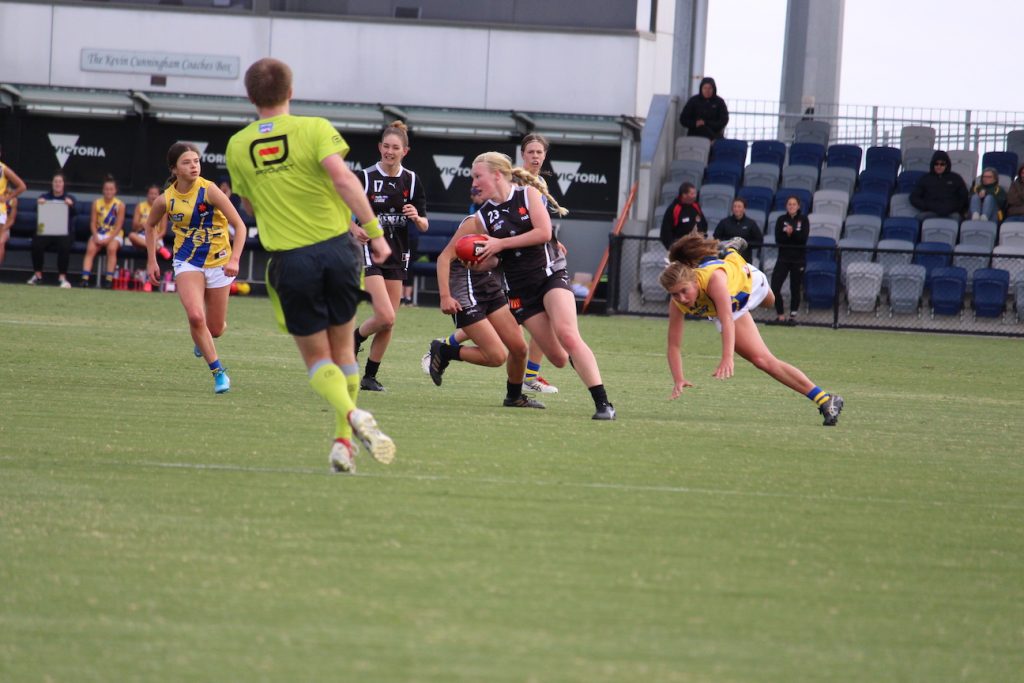 NOT many aspiring footballers receive an invitation to the AFL Women’s Draft Combine. Even fewer have only played one elite junior game of Australian rules football. In fact, that exclusive club belongs to one player – Alice Astbury.

The Greater Western Victoria (GWV) over-age talent recently tuned 19 over the break and was not expecting too much. After being on the list in 2018 as a middle-ager but not playing a game, and then taking the 2019 season off, Astbury only has the 2020 season form to go off.

In theory, that sounds fine. In practice, a concussion ruled the 172cm talent out of the first two games of the season, and Astbury squeezed in one game – against the Western Jets – before the global pandemic delayed and ultimately cancelled the NAB League Girls season. It is fair to say the 19-year-old was a little surprised when she received word that she had interest from AFL Women’s clubs and had a Draft Combine invitation.

“I was 100 per cent shocked,” Astbury said. “I did not in a million years think that I would be invited at all. “I thought after the Rebels season was cancelled I kind of thought to myself, it would be great, it would be awesome to be in that position to be able to go to the combine, but I knew that it’s hard for clubs obviously with little footage and knowledge about my game and stuff like that about my game. “It’s hard to take me on and they might see that as a risk.”

“So when I did get the invitation it was so exciting. “(I thought) How has this happened? It’s so amazing. “It took me a few days to wrap my head around it and now I have it’s awesome.”

Rewinding back to the start of her football journey it is not too far, just a few years ago when she started boarding at Ballarat Grammar. Following in the footsteps of her older sisters, Astbury joined the football team and went on to win Herald Sun Shields in 2017 and 2019, and also came runner-up in 2018.

“I started playing Year 10 at Ballarat Grammar for my school,” Astbury said. “I just played for three years for all three years that I was at Grammar in the school footy team and Year 11 I was asked to play for Rebels. “I trained with the team and everything but I actually didn’t end up playing a game that season. “I think I played one game practice match for the development team in Year 11. “But yeah didn’t end up playing with the squad.”

“Year 12 I took a year off Rebels,” she said. “I didn’t play in Year 12. “I started to focus on study. And then it was at the end of Year 12, the current Rebels coach Rhys Cahir called me up and he just basically said ‘look we think you’d fit in well with the team and have a real chance of going somewhere with your footy if you want to do that, so we want you to be our 19-year-old if you’re willing to play’ and yeah that’s probably when I decided I would play, so I did that.”

Originally hailing for her local high school in Ararat – Marian College – Astbury played a few one-day tournaments, but with the matches only lasting 20 minutes, the teenager said it was not really a major sport in the area. She grew up playing netball and was only introduced to the oblong-shaped ball game at boarding school. It was from that moment that a new sport appeared on the horizon as more and more of her cohort began getting involved in the sport.

“It was watching my older sisters play their first games for the school and I think it was just this ‘woah women can do this too, it isn’t just for men’ and it was kind of really intriguing and as soon as I saw them play that’s when I knew that’s what I wanted to do,” Astbury said in regards to what attracted her to football.

Despite now finding her feet in the game, Astbury still wanted to set her priorities on family and studies, choosing to forgo a place at the Rebels in her top-age year and instead spend the weekends playing netball for her local club, Tatyoon Hawks while doing her best in her final year of high school.

“After Year 11 they asked me again to come back and play for Rebels but I knew that I would want to be home because I was boarding at Ballarat,” Astbury said. “I knew that I would want to be home on most weekends if I could. “Then obviously there was the study as well, so I kind of waited as well. “If I know I want to be home and I’ll be studying, then there’s probably a lot of other girls wanting that opportunity rather than me going in half-heartedly knowing that “I’ve still got a lot of study that I need to be doing, so that’s why I took the year off in Year 12. “I didn’t even really think about the fact that I would even have the opportunity to play this year.”

Her first Herald Sun Shield was a memorable experience, running out on the MCG and winning a title. It still stands as her favourite football memory as “you can’t beat winning a grand final on the MCG”.

Astbury’s choice to get into football was not only aided by her sister’s taking up the sport, but by her father’s support, something she said has helped as the biggest inspiration for her career.

“I think that he was also very new to the fact of girls playing footy when my eldest sister started playing at Grammar,” Astbury said. “I was probably very unsure of it at the start. “Ever since we all started playing we’ve been really enjoying it, he’s always there with the comments before the game. “Helping us improve the things we need to and he definitely isn’t scared to tell us what he thinks or what we need to improve. “But he’s also good at helping with that improvement instead of just saying we need to improve it.”

Astbury said her greatest strength is “not fearing the outcome”, while she is keen to improve her kicking and technique as a relative newcomer to the game.

“I’ve always sort of thought that my biggest strength was not fearing the outcomes,” Astbury said. “My dad has always drilled it into me, you go in hard for the footy and you get it out fast so I think I probably show not too much fear when I go into hard contests, which is something maybe a lot of other people struggle with and steer away from. “Probably just that and I’m a bit stronger than I look to be, so those are what I’m best at.”

Her technique is something she has been working on during the off-season break, as well as her fitness while contemplating her options. Not 100 per cent set on her exact course, Astbury is looking to get into the health field and where she studies could be dependent on next week’s AFL Women’s Draft. Whatever happens, it is safe to say the former netballer is now hooked on footy and is keen to follow that passion wherever she goes.

“I haven’t thought much about it,” Astbury said. “Next year has probably been a big question mark for me because I haven’t had a big idea where I wanted to live or what I wanted to do at uni so footy might help with that if I get drafted to like Geelong, that might make my decision on which uni or where to stay a bit easier. “But I think I would definitely like to continue to play footy whether it’s for a uni team or for a local club.”