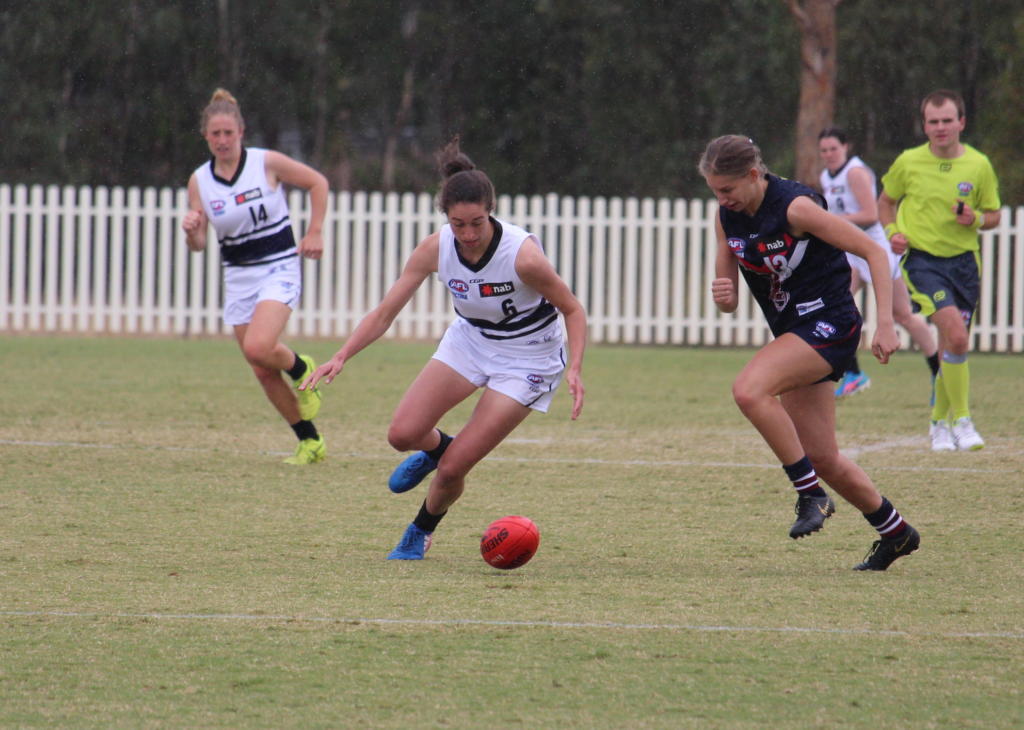 BUDDING AFL Women’s draftee Alyssa Bannan came into her top-age year looking to “put everything out onto the field with every game.” Little did she, or any of her fellow NAB Leaguers know that their season would be cut short to just three games, but an increase in work-rate, work ethic, and intensity certainly payed off for the Northern Knights key forward.

“I was actually very proud of how I went,” Bannan said. “Knowing that this was my last year as a top-ager and it was my opportunity to get drafted, I went out thinking that I had to play my best game, every single game. “How I felt coming off the field definitely made me think that I did myself proud, did my family proud, and did my friends proud with how I played.”

Nine goals in three outings, including a bag of five in the season-opening Grand Final rematch goes a long way to instilling such pride. It even saw Bannan shift her original end goal of being drafted, to being selected within the first round. But more significantly than simply being a great player on-field, the 18-year-old is determined to prove her worth as a quality person, off it.

“It’s definitely not so much about being a good player on the field, but also being a good person off the field,” she said. “I’ve found that clubs have been very big on not only being a very skilful player, but being kind, being caring, being motivated, and that’s what has been the focus throughout the year.”

The break from football has somewhat proven a blessing in disguise. While Bannan admits the early unknown was “difficult”, she says the time off has allowed her to find a greater balance in life.

“At the start it was definitely very difficult not knowing if we were going to be able to finish off our season,” she said. “But I think having this break has allowed me to develop individually on aspects of my game that I wouldn’t normally focus on, such as my mental heath with wellness sessions and being able to (practice) mindfulness. “Although it has been disappointing not being able to finish, I’ve definitely been able to work on those different aspects of my life to balance it out.”

Having played a key part in Northern’s unbeaten NAB League premiership last year, Bannan has risen through the ranks alongside some of the greatest players the competition has seen. Namely, 2019 captain and current Western Bulldogs rising star Gabby Newton has had a major impact on the Knights’ no. 6, helping establish a healthy and competitive environment to improve in.

In line with the standard such players set, Bannan says she also sought to become a leading figure in her side’s setup.

“Having played alongside Gabby Newton and personally getting to know her, her qualities and attitudes as a player have definitely been something that I look up to,” she said. “Her teamwork, her (desire) to do really well and continue to improve are definitely qualities that really strike home to me as ones I want to present.”

“The new role as a top-ager really made me want to lead and present myself as someone who people can look up to and can think ‘She’s a really good player, I want to aspire to be like her.’ That’s been my overall goal throughout, especially this season.”

Bannan, a Carlton supporter also looks up to AFL Women’s trailblazer Tayla Harris. If a player comparison is what you are after, an easy link can be made between the two high-flying forwards.

“Tayla Harris is a big player who I wanted to model my game style on,” Bannan said. “Playing in similar positions, having a similar style of play, she’s definitely been a player that I really look up to and who I would like to emulate when I hopefully get to play AFLW.”

Football has also impacted the youngster in terms of her other potential career options, too. As she completes her Year 12 studies, Bannan has one eye on a vocation in the sporting realm, helping athletes get the best out of their game. It is a theme she says her football career has helped bring out.

“Sport is definitely on the list,” she said. “I’d love to do anything to do with strength and conditioning, high performance, even if it’s performance analysis. “Just improving players and their performance, because that’ll definitely help me see how to improve my performance as well. I think footy’s definitely brought that side out in me.”

With her first round draft dream in tow, Bannan is seeking to hit the ground running once her shot at the big-time is sealed, out to prove not only to herself and clubs, but to fans that she is “on the field for a reason.” The Northern Knights graduate also sought to thank the “long list of people” to have influenced her footballing journey; from her supportive family, to her coaches, teammates, staff, and everyone in between who helped her get to where she is.