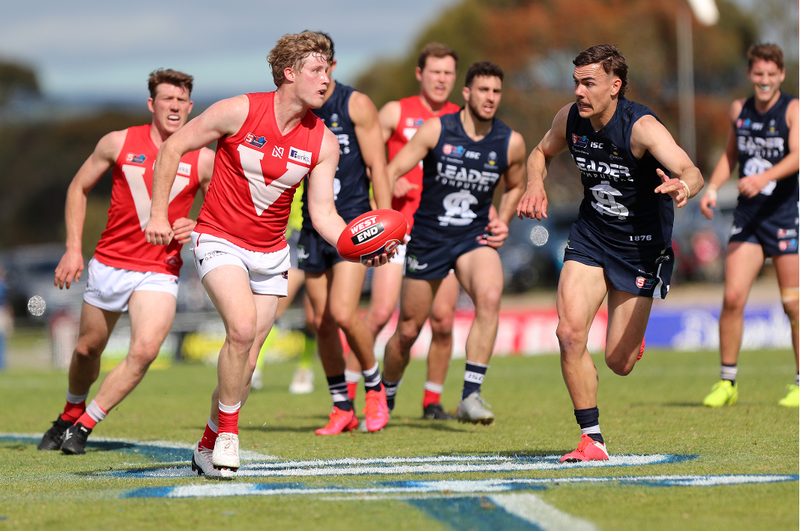 WITH young guns impressing at state league level around the nation, we again narrow our focus for this week’s South Australian National Football League (SANFL) wrap to the performances of youth throughout all three grades. There is plenty to unpack in our next altered edition, with Under 18 prospects scattered across the two senior competitions, and a bunch of youngsters impressing in the junior grade in Round 14. Heavy finals ramifications were in place during the ultimate regular season round, which saw the cream truly rise to the top.

West Adelaide finished both its senior seasons on a high, defeating Norwood in the League and Reserves grades. While the results saw Westies steer clear of the last-place Redlegs Reserves, the Bloods still finished bottom of the League and Under 18s ladders with a combined three wins in either competition. Norwood was the best of the rest at League level, and missed out on top spot in the Under 18s by percentage only after a second-straight win.

The top flight debuts of Bailey Chamberlain and national combine invitee Jye Sinderberry were made memorable, as the two Westies young guns performed solidly in their side’s win. Chamberlain racked up 17 disposals and booted a goal playing on the wing, while Sinderberry managed 12 touches from defence. Lachlan Squire and fellow NSW/ACT recruit Hamish Ellem were also part of the Bloods’ victory. Norwood’s Jack Heard made up another debut for the weekend, notching 14 disposals and five marks for the Redlegs.

Nicholas Couroupis, Cooper Gilbert, Michael Laudato, and Hugo Kelly were among the young Bloods to contribute as West Adelaide saluted to the tune of 31 points at Reserves level, trumping a Norwood team which also boasted some young talent in the form of Mitchell Carroll, Alexander Scali, Lachlan Falco, and Nathan Maunder, the former two of whom booted a goal each.

The junior Redlegs got one back with an 83-point thumping of Westies, headlined by 29 disposals and five goals from the returning Jack Saunders. Henry Nelligan (33 disposals, one goal) was another small to find plenty of the ball, while Xavier Tranfa and Michael Cavallaro joined Saunders in booting multiple goals from over 20 touches. Westies’ tough season ended bluntly, though Eduard van den Berg (27 disposals, 12 rebound 50s) and Cade Kennedy (21 disposals, five clearances) were among those to finish their consistent campaigns in good form.

Woodville-West Torrens (WWT) officially secured the League minor premiership on Saturday despite a shock loss to Central District, with gun small forward James Rowe also tying for the competition’s leading goalkicker award. The Bulldogs also triumphed in the Reserves to secure a minor premiership of their own in front of the second-placed Eagles, while WWT’s Under 18s are every chance to go back-to-back having secured third spot.

Rowe’s sole major and three from Coburg VFL recruit Sam Lowson were not enough to help the Eagles finish the League regular season with a win, though there were some promising young performers. Among them, former Port rookie Kai Pudney managed 20 disposals, followed by 18 from 19-year-old Lachlan McNeil. Northern Territory product Ben Jungfer will also hope to have secured his finals place after 11 touches. Jackson Kelly (21 disposals, 10 tackles, one goal) and Jack Toner (19 disposals, six marks, one goal) were both terrific for the winners, finishing their senior campaigns off well along with the Bulldogs overall.

Lachlan Grubb and Nicholas Lange snared two goals apiece as the Centrals two’s got up by 42 points, doubling their opponents’ total score in the process. But it was 2019 Oakleigh Chargers premiership player Thomas Graham who was named best for the victors in a terrific performance. Thomas is the son of former Hawthorn and Richmond player, Mark Graham, and was eligible to be drafted to the Hawks via the father-son rule.

As usual, the Eagles managed a good spread of performers as their Under 18s secured a comfortable win, led by usual suspects Jase Burgoyne (31 disposals, one goal) and Caleb Poulter (27 disposals, two goals). Port father-son prospect Taj Schofield was in the thick of it, Jordan Kasianowicz booted four majors, and tall pair Henry Smith and Zac Phillips both fared well aerially while hitting the scoreboard. 16-year-old Austin McDonald capped off a stellar season with 32 disposals and 12 clearances against stiff opposition, aided by Lewis Cowham (30 disposals, 10 clearances) and bigman Wyatt Ryan, who matched his hitout haul (25) with disposals.

Equal League leading goalkicker, Liam McBean‘s four majors led the Bays to a confidence-building win heading into finals, though it was Sturt who took the points across the Reserves and Under 18s fixtures. Having snuck into the top four, the Tigers’ premiership defence is alive, but their season came to an end in the two remaining competitions. Conversely, the Double Blues will boast finalists in both those grades, with the Under 18s finishing top, but the League side left behind in sixth while the Reserves claimed third.

Glenelg over-ager Callum Park will bring some good form into finals, having managed 19 disposals (17 kicks) and 11 rebound 50s from his usual defensive post. Double Blues ruckman Daniel Fahey-Sparks ended his own season in commanding fashion, winning a monster 49 hitouts to go with his 18 disposals, seven marks (four contested), five clearances, and one goal.

Despite five goals from Nicholas Leck and a raft of young contributors, the Bays’ Reserves couldn’t repeat the feat. Riley Holder and Xavier Robins both played their first games at the level for Glenelg, while the likes of Luke Edwards, Ty Murphy, Cooper Horsnell, Hagan Wright, and Mitch Martin made up the Bays’ youthful core. Anzac Lochowiak and Beau Schwarze both found the big sticks in a winning Sturt side which also boasted Josh Shute and Tom Emmett.

Three Sturt guns racked up 34 disposals each as the Double Blues won comfortably in the Under 18s; with Malachy Carruthers working hard to also claim 15 marks, Bradley Jefferies snaring 10 clearances, and Mani Liddy adding a goal to his tally. Bigman Morgan Ferres booted three majors as he looks to impact during the postseason. Harry Tunkin (24 disposals, seven tackles) was busy for Glenelg, leading the disposal count in front of three teammates – Oscar Clark, Bailey Durant, and Henry McAuliffe – who all managed 23 touches.

South Adelaide pulled off a confidence-boosting win over fellow finals bound League side, North Adelaide, while also securing finals at Under 18s level with another quality victory over the Roosters. North managed to get one back in the Reserves though, only cementing the status of their two senior sides in the postseason.

Zac Dumesny made his return via the Under 18s, helping his Panthers lock in a top four spot with 33 disposals (26 kicks) and 11 marks. Bottom-ager Matthew Roberts had a day out with four goals from 28 touches, while Harry Spacie (23 disposals, 10 marks) was also handy, and Nicholas Kraemer (19 disposals) was another to return strongly. Draft bolder Brayden Cook booted 2.5 from his 12 disposals. Jayden Davison (28 disposals, six clearances) was again a top performer for the Roosters, while Hugh Jackson and Zyton Santillo both ticked over 20 touches and found the goals. Adelaide NGA gun Tariek Newchurch capped his season with four majors in a more consistent display.