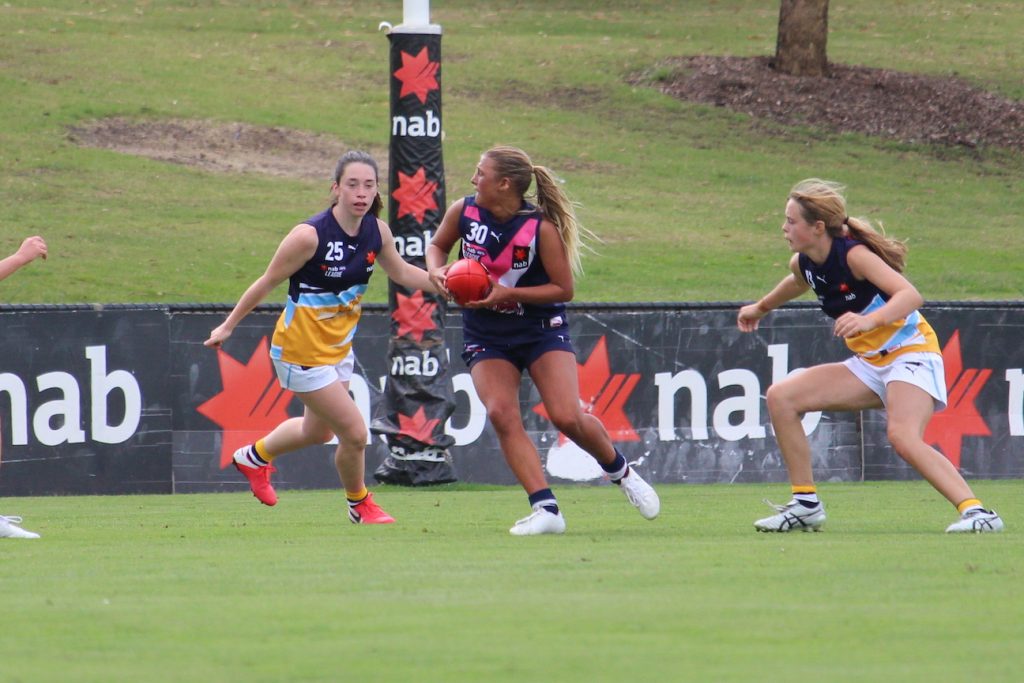 AT first it was heartbreaking. Being told that the NAB League Girls season was put on hold and then eventually cancelled. For a top-age player it was the news no one ever expects coming into the most important year of their football career, and for someone like a club captain, it burns deep. But for Sandringham Dragons’ leader Winnie Laing, once she got over the immediate disappointment, she turned to the positives.

“I remember at the training where we got told, a lot of us just ran to the bathroom and cried,” Laing said. “But after a while I was able to see the positive side of everything. “It was more of an opportunity to develop more as a player individually with my skills and my fitness everything and really taking it to that next level.

“So I think being able to build a schedule which I did, really helped get through everything and have a positive outlook that there will always be something to work towards whether that be the combine, whether that was that we got to play games, or even just preseason for the next year, that was always going to be something that we needed to prepare for. “I think it was a good opportunity to develop individually.”

There was extra motivation for Laing, who missed out on representing Vic Metro as a middle-ager in 2019, but rather than let that get her down, she used it as extra ammunition to attack the 2020 year.

“Not making it (Vic Metro) last year was very disappointing and I was quite upset and I think that was a real motivator for my preseason,” Laing said. “Obviously individually in the time off just working on my skills and my running. “Not making it kind of motivated me more to play better this year and then in preseason just trying to get the most out of the coaches and the team.” Trying to play good as a team, so we could all and myself, play better individually.

“I think what helps motivate me is when you miss out on spots like that and that definitely helps motivate me this year to play a good first three games. “I consider myself a pretty positive person. “Whenever something bad does arise which it always will. “Just trying to find the positive out of that and how I can get the most out of that, whether that be training harder, developing better skills. I think there is always a positive even in the bad.”

Rewinding back to the beginning the Dragons leader initially did not start her football career until a few years ago in year 9, having played a few other sports including basketball. However, as often has been the case with basketballers turned footballers, friends noticed that perhaps her attack on the ball carrier would be better suited in a game with tackling and contested ball-winning.

“I first started playing basketball and athletics and because I was pretty competitive on the basketball court, a lot of people just kept saying ‘you need to go try out, go watch a game’ so yeah we went down to the local oval, watched a game and I knew from then that I wanted to play straight away,” Laing said. So joined Port (Melbourne) Colts then the next season joined Sandy and moved over to East Malvern playing junior footy. “Then Sandy just started to develop my want to play AFLW even more.”

For the “big Richmond fan”, football has always been a fundamental part of her life, but like others who aspired of playing elite-level sport, there was no pathway for young girls coming through the programs. Once the AFL Women’s popped up – coincidentally the same year Laing switched into the code – the tough midfielder was all-in for her dream of reaching the top.

In what would be her second football season, Laing made 2018 Vic Metro Under 16s squad and ran out on GMHBA Stadium with some of the best young talents in Victoria.

“It was pretty exciting to see an elite pathway early and obviously it was a very talented group so being able to see the type of talent that my age group has and learning all the different skills and even just pregame techniques with everyone,” Laing said. “Being in that elite environment was pretty special and the coaches were obviously very highly looked out for so that was good as well.”

Laing’s running ability – from her athletics background – moulded perfectly with becoming a midfielder, something she did from very early on in her career. While she predominantly stayed in the role, she did spend time off half-back in 2018, and then up the other end of the ground in the few games this year.

“I had that running capability so I was drawn to the midfield because I think my best attribute would be competitiveness,” Laing said. “So both them meshing together really helped me play in the midfield but this year obviously being versatile was really important, so trying to build different positions. “Like playing forward this year I really enjoyed, but also being able to play on the wing, or I did play half-back in my first season at Sandy so I think being versatile is really important.”

Prior to the 2020 season, Laing was announced as captain of the Dragons, an achievement she said was “pretty honourable”.

“Obviously the girls at Sandy are a very high talented group so being named captain was very honourable to be able to represent all the girls and the team and the coaches and everything,” she said. “It was a pretty exciting experience, I didn’t expect it at all, just being able to build that culture more at Sandy is what I was looking for and I think that’s why we got to play really well in the first three games because we were such a tight-knit group and had all the desire to win.”

“I think being captain I’ve really flourished as a player,” Laing said. “Individually I think I have quite clean hands, being able to get it on the inside and fire it out to the good runners and good players on the outside but also having everyone’s back as a team is a really good attribute so everyone can play with confidence because everyone plays well individually but we’ve got to play well as a team.”

Transferring codes from basketball to football, Laing said her hand-eye coordination was great, but it was her kicking that needed the most work. With the time off, Laing was able to hone down on that and really try to perfect both her kicking out of a stoppage and kicking inside 50.

Laing enjoyed a really strong season in 2019, capping off a stellar NAB League year with a third placing in the Dragons’ best and fairest which she describes as a “pretty big honour”. When she went back to East Malvern, she finished second in the League Best and Fairest, and won best on ground in a premiership-winning grand final. Laing said it was a “pretty rainy, crappy day” but being able to perform on the big stage and celebrate with her team made it worth it and her best football memory.

As for her on-field inspirations, Laing said her Dragons’ teammates continue to inspire her, but also a current AFL player who she said has “changed the culture” at his club, something she always aspires to live up to.

“Everyone has good attributes,” Laing said. “Like Bella Eddey silky hands, Sarah Hartwig good marking, Eliza Mac (McNamara), all of them have really good attributes which help inspire me to play. “Then obviously more famous players like Patrick Cripps. “He’s my favourites, he’s exactly what I want to be as a player. “His leadership, he was able to change the culture at the Carlton Football Club and that’s made them a better team and playing better this year, but also his individual game, he plays on the inside but plays on the outside and can finish with a couple of goals. “So I think his gamestyle as a person and a player has really helped inspire me.”

Laing’s goals coming into the season were team-focused. When the season was called off, her ways of achieving the goals might have changed, but the motivations behind them did not.

“I think before the season was cancelled, my aim was quite team-focused,” Laing said. “I wanted the team to play the best footy we could for ourselves to play better as well, all the top-agers. “I obviously wanted to play a good season to give myself the best opportunity to be drafted at the end of this year and I think once the cancellation of the season did happen, my goals didn’t really change as such.

“I still want to be drafted and give myself the best opportunity so that really motivated me the cancelling of the season to keep training really hard and practicing my skills and my running when we did have guns at the end or the combine that I was putting my best foot forward.”

Being a positive person, Laing knows that it is not the “be all and end all” if she does not get drafted in just over a week. While that would be the main goal, there is little doubt the Dragons captain will dig deep and do whatever it takes to make the next level.

“I think obviously being drafted this year would be the goal,” Laing said. “But I think that’s really good thing about women’s footy that any age if you play a couple of good games somewhere you’ll get noticed, and you’ll have a chance to be picked up so I think that’s definitely the positive about women’s footy that there really isn’t an age limit to start your footy career. “So for all girls, this year isn’t the be all and end all, we know if it doesn’t go our way that there is always other opportunities.”