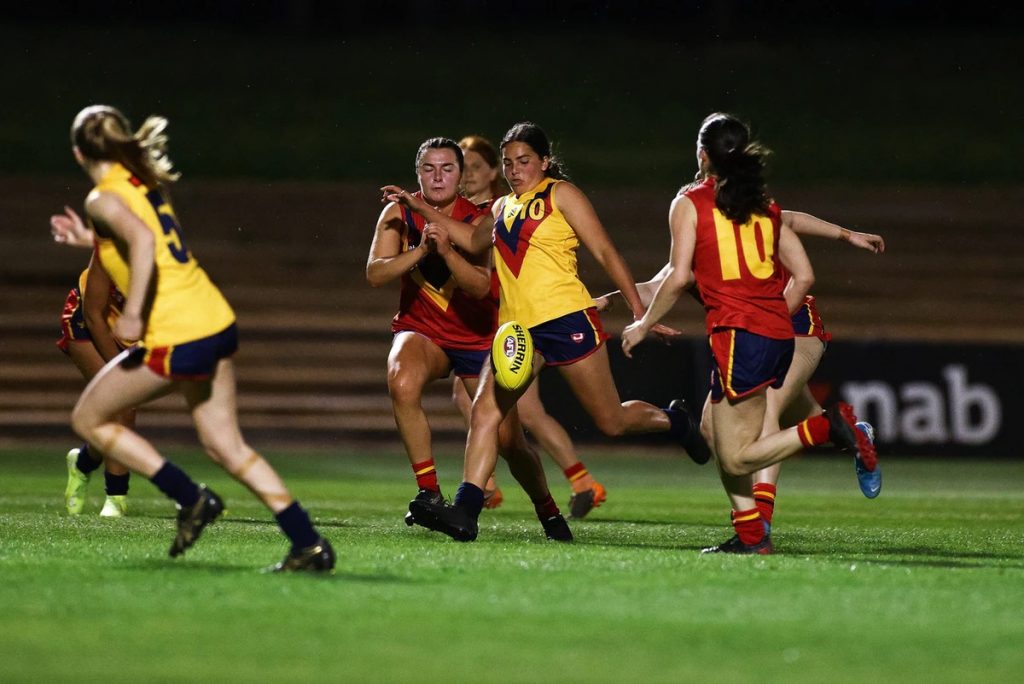 FORMER national representative basketball player, Jorja Eldridge made a decision last year to give up years of basketball and focus on an Aussie rules career. The talented baller had been playing since she was 11-years-old and represented the South Australian state country team on five occasions, then went to a national championship a further three times. Despite this, Eldridge realised the lack of opportunities in the sport and went down a different path.

“In the middle of last year, the middle of 2019, was my last national tournament as a top-age under 18 player,” Eldridge said. “So from there, there’s not too many opportunities from basketball. “Other than like the under 20 state team, which includes SA country and metro. “But from there, I kind of fell out of love with the game and then, yeah, one of my mates was just like, ‘Oh, do you wanna come trial for this football? like, play in a Whyalla combined girls’ team?’. “So I did that. “And then yeah, from there, I loved it. I got more into the system, I have just been getting better from then.”

While her decision to change codes was one thing, playing at a North Adelaide Under 17 girls carnival in Port Augusta in August last year was another. The Roosters liked what they saw and Eldridge slotted into the youth side.

“I played in the Under 17 North Adelaide team in 2019 mainly as a centre half-back and then I was selected in the Under 18s state squad and ended up being in the M36 before COVID happened,” she said. “Then I was also travelling for the women’s North Adelaide team. “But from there, I made the train-on squad and then moved up into the squad during the COVID time. “And then the shut down of the SANFL season happens. “But then when it came back, I actually debuted in Round 5 in 2020 and also played in Round 6.”

Whilst she might have had a lack of senior experience heading into the season, Eldridge worked hard during the COVID-19 pandemic break to earn a debut and finish with two games playing for the undefeated Roosters in the South Australian National Football League (SANFL) Women’s.

“Yeah, honestly, it was quite a surprise to me,” Eldridge said of her selection. “But I did work extremely hard in the COVID off-season time, because I thought I might as well try as best as I can. “And then even if I didn’t get a game, I was planning on moving to Adelaide next year and hoping to get more into it. “Then from that Krissie (Steen, North Adelaide coach)… I got a FaceTime call from North Adelaide on a Wednesday night when they were announcing the team and yeah I made the team for my first game, so that was pretty exciting for me.”

Travelling from Whyalla to Adelaide is around a four-hour drive, something that is never easy. Luckily for Eldridge, she had supportive parents and they had familiarised themselves with the drive due to the teenager’s basketball commitments.

“It definitely has that drive that will kill you, and especially when I was playing basketball, my national trainings were actually at Murray Bridge. So that was even further,” Eldridge said. “We had to go, but then because of the basketball, my parents were used to doing that. “So then they were more than happy to do that with football as well. “So even though I’ve got my licence and I am 18 they’re still taking me down because they love it. “Just as much as I do.”

While Eldridge had made a decision that the 2019 basketball season would be her last, she decided to still take to the floor for one last dance prior to her big move to the capital city.

“I actually wasn’t going to (play another season),” Eldridge said. “So when I was playing football, I was just playing football. “I did play netball locally but if I ever like the two games I played (clashed), I just missed out on playing netball that weekend. “But I wasn’t going to play another season of basketball. “But it’s just recently started, and I am playing one last season before I moved to Adelaide next year. “But that’s that’s just at a local level. “That’s not anything higher.”

Basketball has also helped Eldridge adapt to football with a number of different traits she was able to transition from the court to the field.

“My strength, I would say as, like, my agility, my athleticism and my speed and I actually do have good hand-eye coordination as well,” Eldridge said. “So I’m able to use those skills that I’ve developed over the years to then put that into it Just the football aspect. “It is a different knowledge of the game. “Definitely there are some parts of similar like, but basically like in defence, if you’re like man on man or, if you like, in zone like, it’s kinda similar. “But yeah, it’s definitely some things that I mean to keep looking into more for football to strengthen my knowledge of the game.”

For Eldridge, the COVID-19 pandemic put her new footy career on hold for a while, and while she admitted it was “difficult” during that time, she was determined to make the most of the time off and come back better than ever.

“It was probably harder for the girls who started off playing in the season because I didn’t have my game until after the COVID break,” Eldridge said. “However, we still did zoom calls with Krissie and the strength and conditioning coaches and we had our road running and strength programs made up that we still had to continue with and I think that’s why I did get a run because I followed through with those schedules and what she wanted us to do. “And I worked closely on my skills and yeah, I think I have definitely improved my fundamental skills over the course of that time as well.”

The debutant said while she was new to the sport and did not have a huge inspiration from a football perspective, she admired the likes of Tayla Harris and Erin Phillips. As for her journey, she could not be more grateful for the path she had taken, and owed it to a number of people and clubs who had supported her along the way.

“I would also like to thank North Adelaide, particularly Sambo (Emma Sampson) and Krissie for the amazing opportunities they’ve given me. “When I actually couldn’t go down and train with North Adelaide, I was luckily enough to train with the Roopena football club in Whyalla. “And then my local club, my family club was North Whyalla who actually sponsored me for the 2020 season of North Adelaide.”

Eldridge is currently studying her Certificate IV in Fitness as she aspires to become a personal trainer. By making the move to Adelaide, she will extend her knowledge in the area by studying exercise physiology. But the additional benefit of the move would be closer to Prospect Oval where she can focus on her football and trying to cement herself in the side each week.

“Next year, I’m wanting to really concentrate on getting in every game in the SANFLW like in the North Adelaide team. and from there, I’ll see where it takes me,” Eldridge said. “But I would really love to play in the AFLW whether that’s starting the end of next year. “So the start of the 2022 seasons or maybe it might be a little bit longer because I’m still only new to playing.”