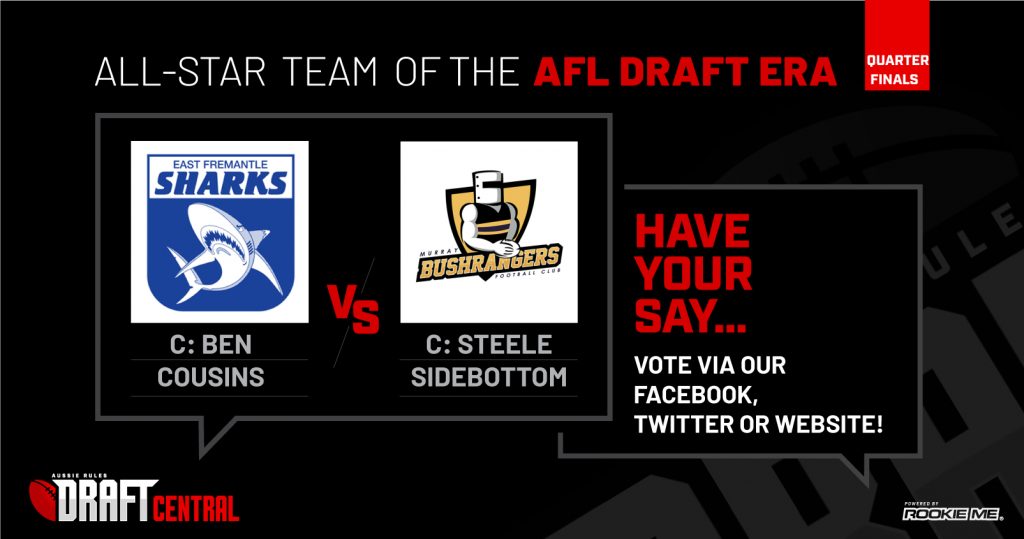 OUR next All-Star Team battle makes for an intriguing semi final clash, set to play out between a West Australian talent factory, and a powerhouse Victorian region in East Fremantle and the Murray Bushrangers respectively. The two captains voted in by the public as the All-Star Players of the AFL Draft era were West Coast Eagles champion Ben Cousins (East Fremantle) and current Collingwood star, Steele Sidebottom (Murray).

These clubs are seeded first (East Fremantle) and fourth (Murray) respectively, as the seed gap between each side closes with each passing fixture. The proposed Bushrangers squad outvoted Sturt, the Oakleigh Chargers and Northern Knights, while East Fremantle’s path to this stage came through the Calder Cannons and Sandringham Dragons after a first round bye. The winner will qualify for the Grand Final, set to face either the Port Adelaide Magpies or Geelong Falcons.

This one should be fairly straightforward, as East Fremantle arguably boasts the strongest starting midfield group in the draw. With Brownlow medalists and AFL premiership players, Cousins and Simon Black joined by current Carlton co-captain Patrick Cripps at the centre bounces, it’s hard to see any side beating that kind of balance through the engine room. Cripps provides the inside grunt, while Black is the silk, and Cousins the gut-running accumulator. Fremantle champion Paul Hasleby has even been pushed out to a wing, partnering the late Chris Mainwaring.

That’s not to say that Murray lags in the midfield department, with David Mundy, Clayton Oliver, and Tom Rockliff no slouches by any stretch. Add the running power of Sidebottom and dynamism of Brett Deledio on the outer, and you have a seriously talented group. While we would still take the Sharks’ starting centre bounce trio, what really sets them apart in this matchup is their depth. Not only have Elliot Yeo (half-back) and Andrew Swallow (half-forward) been squeezed out to the flanks, but the likes of Daniel Kerr, Shane Woewodin, Dom Cassisi, and Shaun McManus also remain on the interchange. Murray would be able to rotate Jack Ziebell and Steve Johnson through from the forwardline, but that kind of firepower is near-impossible to match.

You could hardly build a better midfield core if you tried than what East Fremantle lays claim to, so the Sharks clearly get the points in this midfield battle. With a balance of class, grunt, endurance, and depth, it’s everything you could ask for.

As has been the case with many of Murray’s matchups, its starting key position spine is arguably weaker than the opposition offering, but depth seems to give the Bushies a deal of versatility which cannot be matched. East Fremantle lays claim to Luke McPharlin and Harry Taylor down back, with Paddy Ryder accompanying Josh J. Kennedy up forward, and Aaron Sandilands taking on the ruck duties. Bigman Darren Bennett also features in the forward pocket, potentially able to fill Ryder’s spot once the Port player gives Sandilands a chop-out on the ball. With McPharlin and Taylor also know to swing forward at times, the Sharks have a pretty handy rotation, with Cale Hooker also in the mix.

But Murray’s may well be better through a sheer weight of options. Where East Fremantle may struggle for numbers, the Bushrangers thrive, able to fit a bunch of pieces to its key position puzzle. Ben Reid and Alipate Carlile make up the defensive pairing, while Barry Hall and Jarrad Waite are a solid forward combination. Add Fraser Gehrig and ruckman Steven King to the mix, and the spine is quite good. The difference makers come from the bench though, with Ben McEvoy and Justin Koschitzke both able to plug gaps through the ruck or up either end, while Sam Reid could also prove a handy swingman – much like his brother.

By way of its diversity and superior range of options, Murray takes out the key position battle overall, even if East Fremantle’s starters arguably hold a slight edge.

To cut a long story short, we’re backing our first seed to qualify for the Grand Final. As one of the most prolific producers of high-level West Australian talent, East Fremantle simply boasts too much class for many sides to handle. Murray matches up well, and may even get ahead in some areas, but would not be able to match the Sharks where it matters most, in midfield. They’re strong everywhere else too, and will be difficult to top in the decider. 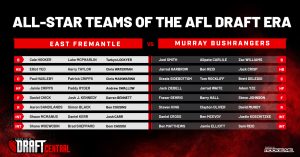