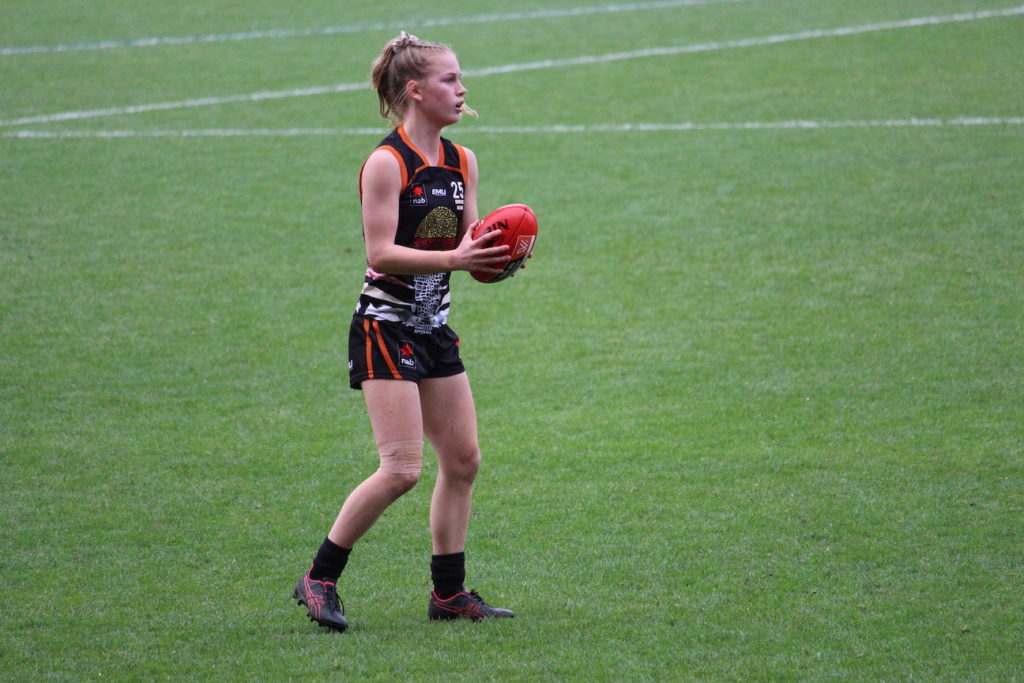 A PASSIONATE Crows fan and talented teenager who has been touted as one of South Australia’s top young talents in recent years, Teah Charlton is not far away from living out her dream of playing at the elite level. One of four players to receive an AFL Women’s Draft Combine invitation, Charlton is not expected to last too long on the board having already come through the Crows Academy, and won All-Australian honours in her middle-age year as well as a premiership and a Breakthrough Player Award during her debut season in the South Australian National Football League (SANFL) Women’s competition.

The talented midfielder/forward followed her brother into the sport and has gone from strength to strength and to the top of the elite junior pathway as an AFL Women’s National Academy member and representing both South Australia and Central Allies at the AFL Women’s Under-18 Championships.

“I started off watching my brother when he was younger, and I kind of just got a bit interested in it,” Charlton said. “Started playing when I was 11 for the boys team in under 12s and then once I was too old for the boys, I kind of waited around for like a girl’s team to pop up. “That happened to be the Under 14s South tournament that happened. “It’s just kind of gone on from there. “I played at Christie’s (Beach) for two years in Under 18s and then I got involved with the state program from 15 years-old.”

From the moment of picking up a ball, not even spending a “year or so” out of the game could deter her from rejoining the code.

“Once I started playing, I knew I wanted to get as high as possible,” Charlton said. “Obviously that’s become an opportunity now, and hopefully I can take that.”

Along with her football, Charlton also grew up playing netball, and did surf lifesaving for a large portion of her life. But it was football that called to her thanks to the “rough side of it”.

“I love getting in tackling and, you know, kinda letting my anger out a little bit,” Charlton said. “But also just like the community and getting to know so many new girls and yeah, I don’t know. “Life pass.”

Charlton said coming through the South Australian State Academy and National Women’s Academy was a massive boost, able to not only learn the on-field skills, but the off-field attributes that were required to take the step up to the elite level.

“As I’ve progressed in a state program, it’s really taught me a lot of professionalism and how to act in an elite environment, which has been really beneficial,” Charlton said. “And obviously, with the NAB Academy going on, that really showed me what it takes to become an AFL player and that step further, you have to take to achieve at the highest possible level.”

Charlton started off playing purely through the midfield due to her “long distance kind of fit” which boded well with running out games. But in recent years, she has spent more time forward and plays as that high forward to be able to impact both the contest and the scoreboard in games.

Earning a spot with the Central Allies last season, Charlton was one of the most impressive middle-agers with her ability to fly for huge marks, but also lay some bone-crunching tackles. It was her second year at the championships, and she said she had gained confidence from her first year up on the Gold Coast where she showed she could belong.

“Well, obviously, in the first year I did it, I was like in the under-age group, and I was very nervous to go up there because I didn’t know whether or not I could bring it up to that level,” Charlton said. “But I just knew having that one year of experience the next year proved to myself that I could bring it. “I don’t know, like I was able to compete at that level, and I could play like the game I wanted to play up against the best in Australia.”

She described being named in the All-Australian side as a “surprise” but said it was great to know that you could be any age to achieve that. The successful championships came off the back of a South Adelaide premiership, where she played a crucial role in the Panthers’ run to their second title.

“It was very good, because it was with all of my friends,” Charlton said. “I was I able to celebrate with all, like, the closest girls that I kind of had that football journey with and yeah, just celebrating it with girls that, like I’m the most close with.”

Not only did she take home a premiership medallion, but was declared the Breakthrough Player of the Year – effectively the Rising Star Award – which is something she enjoyed.

“I was very nervous because I knew I had been nominated,” Charlton said. “But yeah, taking that home, I was just incredibly humbled and proud of my achievements. “And yeah, just things where I could take my football from that point.”

Fast forward to 2020 and Charlton was again playing a big role for the Panthers as they reached yet another SANFL Women’s Grand Final. Unfortunately for them, this time it would end in defeat as the side they defeated in the 2019 decider, North Adelaide, would reverse the result in 2020 and complete an undefeated season.

“I feel like South, we kind of lost a few people (over the off-season),” Charlton said. “A few people went to different clubs, but we definitely picked up all of that talent back again from all the local leagues. “But yeah, going into the season, we were confident that we could make it back to the grand final. “But on the day North was just too strong for us.”

Charlton has an array of strengths, including her overhead marking, goal sense, X-factor and tackle pressure, not to mention her athleticism. For the top prospect herself, it is her aggression at the football, and taking the game on that she sees as her best strengths. As for her improvements, she is always looking to build up her ability to kick on her opposite foot, as well as her movement around the stoppages.

No doubt the Crows supporter cannot wait for AFL Women’s Draft night, with Adelaide having a monopoly on the South Australian group and Charlton is widely tipped to be the first selection in the group, For the teenager, it is something she has always dreamed of, reaching the elite level for the side she supports.

“Ever since I started watching football, it’s always been Adelaide Crows,” Charlton said. “And then when the women’s teams came in, obviously I went straight for a South Australian team, and yeah, I’ve been following them ever since.”

Charlton said there were plenty of teammates who helped her throughout her career, but one in particular stood out when she entered the Crows Academy.

“I don’t know, probably because from a young age, like I was involved a lot around with Ebony Marinoff,” she said. “When I started training out at the Crows, she really brought me in and showed me around and made sure all the girls got to know who I was and make sure I could slot right in.”

Having to play against Marinoff and the likes of Crows’ club champion Anne Hatchard in the SANFL Women’s, Charlton said it was a little surreal at first, but then once the ball is bounced, they are just like any other opponent.

“Definitely before the game you always kind of think to yourself like, ‘Oh, these girls are from the next level, like, how hard is it gonna be against them?’ Charlton said. “And I don’t know, just feel like that extra bit of nerves standing next to them on the field. “But obviously, once the game starts, you kinda fall back into your own game and just play how you wanna play.”

While Marinoff has been her on-field mentor, Charlton said her father had been her off-field one. The Panthers youngster said he had the most influence on her career coming through the various programs.

“I may be a little biased, but my dad has always been there for me from the start during games. “He will come up to me and just give me a few pointers and I feel like I’ve really benefited from that. “So yeah, my dad’s been a huge influence on my game.”

As for her goals this year, Charlton said she often tries to set game-to-game goals be it disposals or tackles depending on her role and position, but at the end of the day, there is only one main goal and it is just over a week away from being accomplished.

“Honestly, it would just be like a dream come true (to be drafted),” Charlton said. “Like I’ve been wanting this for a very long time now and if that happens, honestly, I’ll be over the moon.”