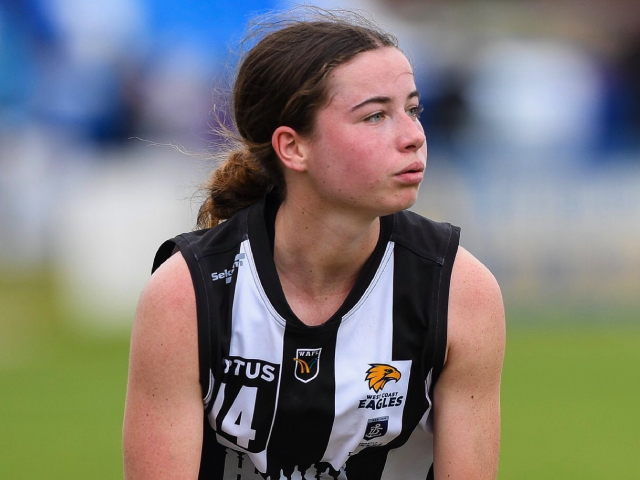 THE AFL Women’s Draft is fast approaching and in the lead-up to the draft, we take a look at each of the AFL women’s sides in pairs and see what they might look for, and who might be available with the selections they have. Next up in our series are the two sides from Western Australia, in Fremantle Dockers and West Coast Eagles.

The Dockers made a few moves in the off-season with three players delisted alongside the retirement of Kate Flood. The experienced Mia-Rae Clifford, as well as Sarah Garstone and Lindal Rohde were all delisted by the Dockers, while Tayla Bresland headed to state rivals West Coast for Pick 46. Coming into the side was North Melbourne’s Jess Trend for a bargain basement price of Pick 44, effectively making it a straight swap in Trend for Bresland. The Dockers wrapped up a productive off-season by picking up Tarnee Tester as a delisted free agent seeing enough to suggest she has more to give at the elite level.

Finishing on top of the AFL Women’s table undefeated in 2020, the Dockers will be determined to back it up with a successful year in 2021 and enter with the second and third selections in the AFL Women’s Draft.

The two players the Dockers will likely look at are two hardened competitors in Sarah Verrier and Bella Lewis, who both trained at the Dockers over the summer. Verrier was a member of the premiership-winning Peel Thunder side in the midfield, while Lewis continued to improve through the midfield-half-forward line and is readymade to have an impact if need be. Both would be worthy selections with Verrier a player who has caught the eye for some time at junior level.

Others who fall under the Fremantle catchment include Lewis’ Claremont teammates, Jess Low and Ella Smith, and towering key forward Rosie Walsh who has enjoyed a strong season at senior level for the Sharks. Of course the Dockers could look at a number of West Coast Academy players too if they see fit in the draft.

West Coast made plenty of moves over the off-season from a list perspective with Kate Bartlett, Cassie Davidson, Emily McGuire, Danika Pisconeri and Tester all delisted. Most of them stepped up at WAFL Women’s level to suggest that they could all earn a call-up if the Eagles – or Dockers as they did with Tester – feel they deserve another chance, while Emily Bonser also announced her retirement.

In terms of trades, Western Bulldogs’ Irish recruit Aisling McCarthy joined the blue and gold for effectively Pick 16, as the Eagles helped the Bulldogs move one spot higher on the draft board which would not impact West Coast having the first selection in the West Australian draft. They also brought in Bresland for Pick 46 who will join the raft of players switching between the teams out west.

The Eagles have a number of top-end talented youngsters in high-flyers Mikayla Morrison and Shanae Davison. Holding pick one and three in the AFL Women’s Draft, they could secure both with those selections, or look at one of the Fremantle prospects too. Morrison has velcro-hands in any conditions and is so classy around the ground, while Davison is an athletic high flyer with a remarkable contested marking ability.

Looking at some of the other West Coast-aligned players, other Swan Districts teammates in twins, Brianna and Mikayla Hyde, and Sarah Wielstra have earned AFL Women’s Draft Combine invitations, as has Subiaco’s Maggie MacLachlan.

As an overall look at the West Australian draft crop, there is plenty to like about the players on offer, and both sides will be stronger for it with talent at ground level and in the air that could step up and have a massive impact at AFL Women’s level next season.