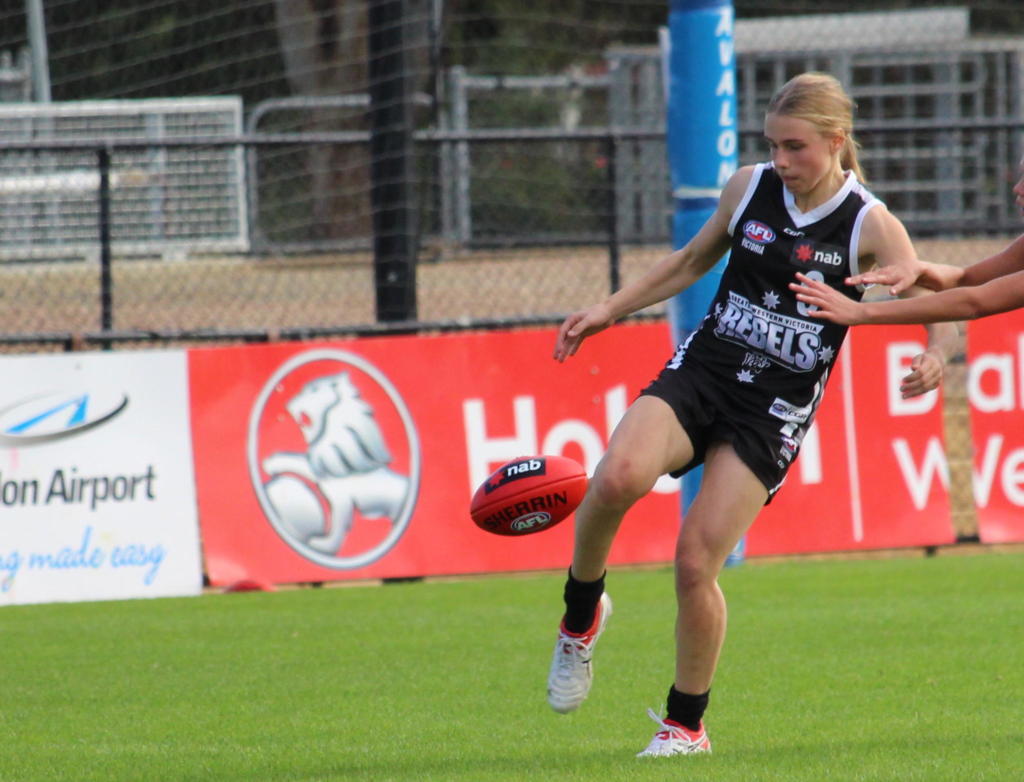 WHEREVER South Warrnambool’s Renee Saulitis goes, generally premierships follow. She tasted success at Ararat Storm, then at Lake Wendouree, and at Ballarat Grammar in the Herald Sun Shield. Now the Greater Western Victoria (GWV) Rebels prospect is hoping that all those long treks from the Shipwreck Coast to the Goldfields will pay off at next month’s AFL Women’s Draft.

The natural small forward who has played in multiple positions across the field, had a relatively straightforward pathway to the elite junior levels of Australian rules football, but it was not without a heap of dedication.

“I started with Auskick level back in the day when I was about five,” Saulitis said. “My brother was playing as well and was playing with a few others and that was really good fun. “Then I moved up with the boys in the Under 12s and Under 14s and then moved on with the girls with South Warrnambool and then Ararat Storm which was in the Ballarat league. “I’m from Warrnambool so we had to travel there, but that was a more developed league and found my footing there and now that I’ve started boarding at Ballarat Grammar I started with Lake Wendouree. “That was really good.”

“But then I’ve also played with the Rebels for a few years now and was a rookie back in the day and we used to just travel to trainings but didn’t actually have the opportunity to play games because I was too young. “So I’ve come through and obviously represented Vic Country and Team Vic a couple of years so that’s been really good.”

Travelling regularly from Warrnambool up to Ballarat, Saulitis said it was a lot of hours in the car for her parents, but everyone was onboard and supportive of her determination to reach the elite level.

“Yeah it was tough for my parents I think but we did for the love of it,” she said. “They loved doing it for me as well so was really thankful for that. “But I think we got used to it, but in the end travelling to Rebels trainings and stuff when I wasn’t in Ballarat and to games. “We did sort of get used to it and sometimes I didn’t travel to training to Ararat, I just did my own stuff here in Warrnambool or trained with South Warrnambool to help with that.”

When Saulitis ended up boarding in Ballarat it saved plenty of travelling, but it also opened the door to a whole new football competition – the Herald Sun Shield – where she enjoyed the title playing last year, after coming runner-up in 2018.

“Yeah that was really exciting because I came from Warrnambool College and there really weren’t any footy teams so when I got up there it was really exciting having a really successful team,” Saulitis said. “Obviously making a few grand finals and winning a few as well. “It was a really good group of girls through those years and we were just really disappointed we couldn’t see what we could do this year as well.”

Alongside her school football commitments, Saulitis was making inroads at the Rebels and earned a place in the Vic Country side at Under 16s level a couple of years ago and played as a middle-ager at the AFL Women’s Under-18 Championships last year. The talented small said she loved going up to the Gold Coast and playing in a multitude of roles.

Off the back of that and her performance throughout the 2019 NAB League Girls competition, Saulitis was invited to the AFL Women’s National Academy, something she admits she was not expecting.

Earlier this year Saulitis put in a match-winning performance against Sandringham Dragons, booting two goals in the final term to help her Rebels side get over the line in a close match.

“I started off as a high forward and playing as the sixth rule that Rhys (Cahir, Rebels coach) wanted me to, which was moving up and being more of a midfielder which is good to see my hands on the ball and get into the game early,” Saulitis said.

“I think he saw I was in the game, but when it came down to that fourth quarter I got thrown into the forward pocket. “I was sort of hoping that the ball would come down and it did so I was able to have an impact so that was really exciting to kick those two goals.”

Among Saulitis’ strengths are her goal sense, kicking, running and agility with the small forward often being the one turned to in order to create something out of nothing inside 50. She has been working on her fitness lately and wants to be able to have a bigger defensive game, especially applying pressure inside 50. Unfortunately that aspect was cut short by the season’s cancellation.

“Yeah I was kinda disappointed having being a vice-captain and we had a really good Rebels side this year compared to other years and obviously we were quite successful this year,” Saulitis said. “So yeah it was sort of disappointing, but I guess you could see it coming and it was a bit of a shock as well. “I wasn’t sure that could actually happen, that it could get cancelled but it did so it was a bit of a shock. “We’ve just got to cop it on the chin and move on because it’s something we can’t control.”

Saulitis said she preferred her forward pocket role and being able to impact the scoreboard, but also liked testing herself across the ground and being as versatile as possible. While she cannot remember exactly when she wanted to reach the elite level, she has certainly set her sights on it since the AFL Women’s was founded.

“I can’t really remember exactly what I thought when I was younger,” Saulitis said. “But even playing on the MCG and all those stadiums when you were younger with the Auskick stuff. “It was really awesome running out in front of the crowd, so yeah I definitely think it was something I strived for, but I wasn’t sure what I was going to do because there wasn’t the women’s competition at the time.”

Helping her along the way was her inspiration and Rebels teammate now Tiger, Sophie Molan.

“Playing along people like Sophie Molan, who has definitely been a mentor of this time and I can chat to her whenever I feel like it and you know when I was in Ballarat I was able to kick the footy with her and just chat to her about everything and what’s coming up and really good to lean on,” Saulitis said.

While her season has not been able to be as consistent as she hoped due to the COVID-19 pandemic, Saulitis showed enough over the past few seasons to earn a AFL Women’s National Draft Combine invitation.

“This year I just really wanted to play consistent games and make sure I put myself out there and tried to have an impact in each game and working on that,” she said. “But also the end of the year goal was definitely just to get drafted for sure.”