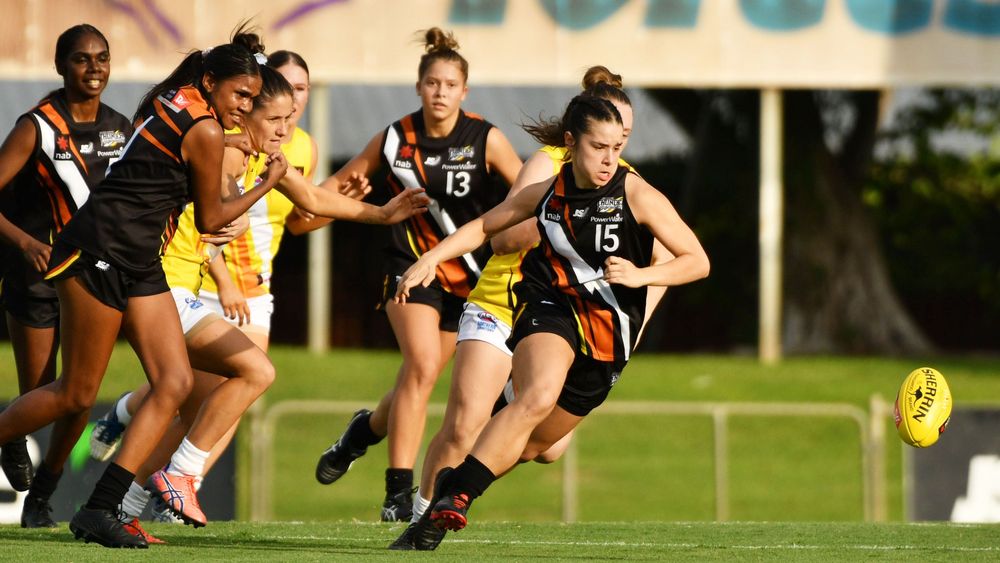 DOMINIQUE Carbone celebrated her 19th birthday in style with an impressive performance that helped Team Ponter record a 28-point victory over Team Hewett in humid conditions for the Northern Territory AFL Women’s All-Star game on Friday night. The over-ager won plenty of the ball and was prolific throughout the four quarters, and clearly one of the best on ground. Top-age forward Ashanti Bush deserved that honour, looking ever dangerous, booting a goal and almost having a few more as the inaccurate Ponter dominated for most of the contest to record an inaccurate, but effective 5.11 (41) to 2.1 (13) win.

The age of talent on display was a real mix from mature-age players who have already tasted AFL Women’s football in Jasmyn Hewett – who captained the team named after her – to the 15-year-old Maria Rioli who certainly caught the eye as a future Richmond father-daughter selection. But it was the work of Bush, Carbone and the classy Janet Baird who caught the eye, as well as future stars Grace Whittaker and Annabel Kievet who are in the Under 16s and Under 15s respectively.

For Hewett, it was the work of middle-age talent Georgia Johnson alongside Morgan Johnston who provided good dash from the back half and through the midfield. Hewett did all she could with some contested ball-winning ability in each third of the ground. Along with the experienced AFL Women’s talent, Freda Puruntatameri showed why she earned an AFL Women’s Draft Combine invitation, kicking a second quarter goal and then going into defence and showing class.

Aside from the first half of the opening term where Team Hewett had a number of attacking players, it was predominantly Team Ponter, with a broken tackle by Katie Streader at half-forward helping lead to a Baird goal on the fun despite the best efforts of Hewett in defence. It was the only major of the term, with Kyanne Campbell kicking a behind for Hewett not long after, but missed a set shot, as did Hewett, who could have edged the margin closer than the seven points at quarter time.

Carbone was ever prolific and soon it was Kievet who added to the lead in the opening minute when she was awarded a free kick and an opposition player ran straight through the mark. On the back of a 50m penalty she made no mistake and put it straight through, and then Sarah Ingram made it two majors for the term. Johnston had a highlight passage of play five minutes in by dancing around not one, not two but three opponents and kicking forward, while Johnson continually mopped up in defence. Soon the hard work on defence resulted in a goal for Hewett as Puruntatameri intercepted a ball at half-forward, sold some candy and sidestepped an opponent to kick her side’s first major on the run.

Whittaker was really stepping up through the midfield with some great athleticism, with her and Kievet trying to break the game open. The experience of Hewett and former Western Bulldogs VFL Women’s captain Mickayla Ward was telling in the back half, stemming the flow and reducing the scoreboard impact for Ponter.

The game was all but put to bed early in the third with back-to-back goals to Team Ponter as Bush took a strong mark out in front, then after missing a target, ran hard forward, roved the pack and kicked it to the square where Molly Althouse did the rest on the line. After an assist, Bush went it alone, read the ball of the bounce perfectly inside 50, running goalside, took it cleanly and put it home. Another chance by the exciting top-ager just missed to the right in what could have been a huge performance from her. While Hewett was unable to score in the term, Ponter missed a number of opportunities after kicking 2.0 to start the term, then kicking 0.6 for the rest of it.

Nonetheless, Ponter was all but home with a 33-point lead at the final break. Baird’s class in patches was telling and with the work of Whittaker and Carbone still have an influence, Ponter was able to hold on despite just kicking the one behind in the final term. J’Noemi Anderson – sister of North Melbourne’s Jed – showed class with a clever spin and kick forward early in the last, but it was Campbell who kicked the easiest of goals off the back of great work from Kaitey Whittaker who got it goalside for her teammate.

Just one behind was scored in the last 10 minutes of the game, but the likes of Johnston and Ward in defence, and Hewett across the ground was important. Team Ponter had plenty of winners across the field, with Bella Clarke another one who had a couple of opportunities playing forward, unfortunately dropping a mark a split second before the siren and as she went to play on and snap for goal in the forward pocket, the siren sounded. In the end, Team Ponter had got up, 5.11 (41) to 2.1 (13) in a showcase of the Northern Territory’s best talent.