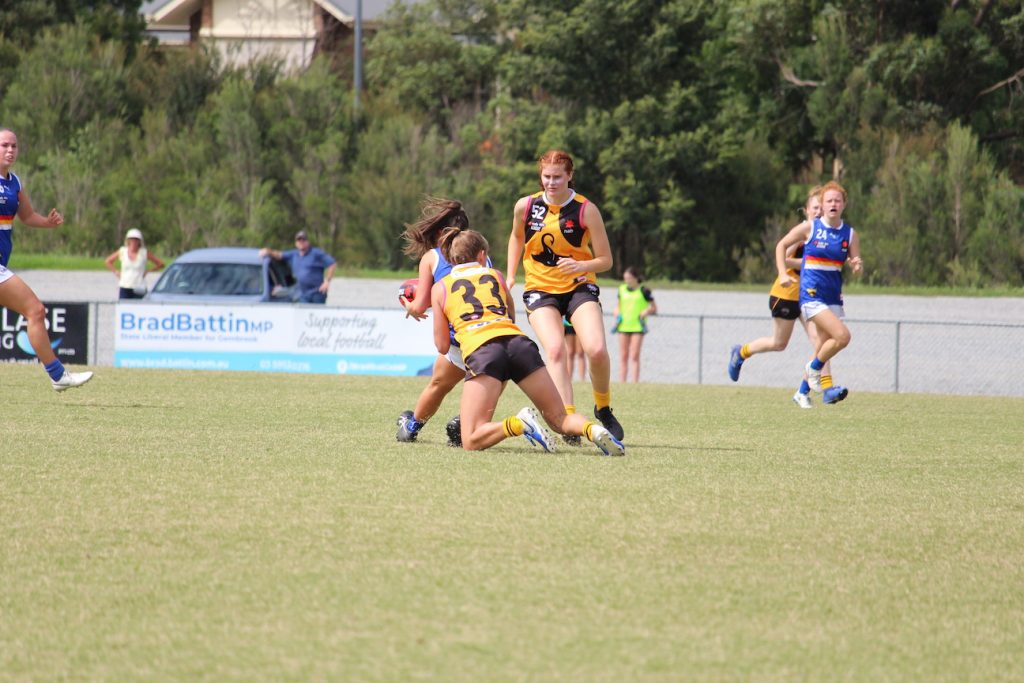 DANDENONG Stingrays defender Zoe Hill admits she started the program back in 2017 as a softly-spoken 15-year-old who was still new to football. After all, the year prior was her first season running around with the oblong ball, crossing from basketball to play with some friends at Mt. Eliza. Fast forward three years, and Hill has been able to find her voice through confidence and credits the Stingrays and Vic Country program for enabling her to do that.

“Well I started playing basketball domestic and then I moved up to rep basketball and played for Frankston Blues,” Hill said. “Then a lot of my girl friends were playing footy and I was like ‘oh that sounds pretty cool, seems pretty contact’ because I’m pretty aggressive when I play sport. “So I think I started playing domestic footy for Mt Eliza in 2016 and then the year after is when I got picked up by Stingrays and then it just went on from there.”

“Yeah that (Under 16s Vic Country) boosted my confidence a lot more and made me realise that maybe I am a better player than I actually thought I was,” she said. “That made me strive to work harder and train harder and get the best place I could so I could develop further.”

Hill admits that, the support of her Stingrays teammates and coaching staff, gave her the confidence to speak up and lead others. It led her to become a vocal component of Dandenong’s backline in the NAB League Girls competition.

“When I first started because I was new, I didn’t really speak much,” Hill said. “I was pretty quiet, I didn’t really feel like I should speak. “But as I got into higher level of footy, I started to use my voice a lot more and that’s when coaches realised I have some good qualities for leadership.”

Like many of her cross-coding cohort, Hill said it was initially a bit daunting getting into football because of the competitiveness, but it did not take long for her to adapt.

“Yeah it was definitely a massive jump just how competitive everyone was and just how much more skilled they were,” she said. “But I felt like I fit in pretty easily because I had the skills from basketball and just developed pretty quick with the girls.”

Hill has become renowned as a key position defender who does not only nullify her direct opponent, but can provide offensive rebound out of the back half. Despite her obvious ability inside the defensive 50, Hill had not always been a key defender.

“For my local club at Mt Eliza, I usually played onball because that was the best use for me on the field,” Hill said. “And then once I moved up into high level so Dandenong, they placed me in the backline and that’s when I started to get pocketed into that position because they saw that I worked well and I had the qualities for that position so that’s when they kept me there.”

Hill recognises her second and third efforts and aggressiveness at the contest as some of her major strengths. Her attack on the ball and new-found voice help her lead both by her actions and her words. These traits, coupled with her intercept marking – that she credits crossing from basketball – has allowed her to become a damaging prospect.

Along with those strengths, Hill said her peripheral vision and ability to read the play and know when to intercept was important, but she was still looking to work on her kicking, being a latecomer to the game.

“I got brought into the game later than everyone else so that’s a skill that I never really got to focus on, so I’ve had my coaches work on that with me,” Hill said. “That’s one of the biggest areas I need to work on.”

In the shortened 2020 season, Hill increased her tackling pressure for her numbers to rise to an average of five per game from her three matches, an impressive feat for a defender who is often involved in aerial contests. It further backed up her claims of second and third efforts being a key area of her style.

“That’s (tackling) something that I love doing and that’s my favourite thing about footy, tackling,” she said. “Just from last year, even with training I started working on that and that’s when I started increasing my tackle count this year, which is unfortunate it had to get cut short I guess but that was a main thing to my game this year.”

Indeed the NAB League Girls season and AFL Women’s Under-18 Championships were cut short and cancelled respectively, leaving Hill like many other aspiring draftees, in a state of uncertainty and disappointment.

Hill has been able to keep motivated with her sights set on the upcoming AFL Women’s Draft. With the new found voice and belief in herself, Hill knows she has what it takes to make it to the next level, it just takes hard work. Extra inspiration are the three Stingrays drafted last year in Molly McDonald, Isabella Shannon and Brooke Vernon who led the way for the middle-agers like Hill.

The Stingrays defender, who has won a local league best and fairest, as well as two Mt Eliza best and fairests and a best on ground in a grand final – one of two premierships which she marked as one of her favourite memories – has done plenty in her short football career. Now she is looking long-term to hopefully get picked up in the 2020 AFL Women’s Draft and take her game to another level and beyond.

“(I) Definitely (set) long-term (goals) so I can look to the future and know that I can strive to and throughout the whole year have to try my best and achieve them which this year was to make the draft,” she said.