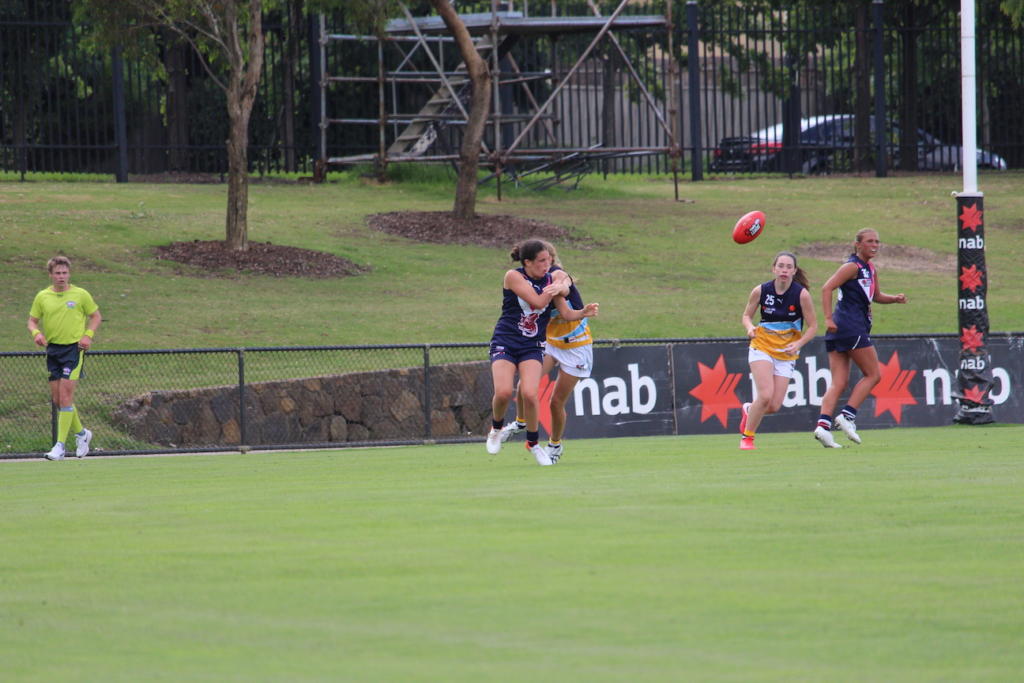 IF you work hard, then anything is achievable. That is the mindset of talented Sandringham Dragons top-ager Bella Eddey who named NBA star Jimmy Butler as one of her major inspirations throughout her footballing career. While she has gone from strength to strength, excelling at the Dragons at NAB League and representing Vic Metro at the AFL Women’s Under-18 Championships, the former basketballer said Butler’s story of resilience and determination was something that really resonated with her.

“I’d probably have to say just one person I’ve really looked up to is Jimmy Butler in the NBA,” Eddey said. “Just when he was little he had a bit of a rough upbringing and he was homeless for a bit there and things like that. “He was like that and if you think he can go from being homeless to an NBA All-Star it just shows you how working hard can get you. “Hard work beats talent and he’s just proven that and I just take a lot from that story and if you just work hard you can get wherever you want to go even if you had nothing in the beginning.”

It is that determination and self-drive that has allowed Eddey to keep focused on her game and always improving no matter what.

“(It’s) definitely something I always like to tell myself,” she said. “If I’ve got an area of improvement in my game I want to get better at or even an area I’m good at, I just think and you look at players like Madi Prespakis and she’s had that immediate impact as soon as she gets into the club. “You just think if you keep working hard and keep going at it there’s absolutely no reason why that couldn’t be you as well.”

Eddey did have a predominant basketball background, but like a lot of passionate Aussie rules fans, once the AFL Women’s pathway became a reality, the midfielder/forward had no hesitation in making the switch.

“I think like most girls we kind of started with a different pathway,” Eddey said. “Similar to them as well I started with basketball because there was no pathway for girls in footy so I kind of figured there wasn’t much point playing because I wanted to play a professional sport so I started with basketball. “Did that for a few years. “Did a bit of touch footy as well and then in the year that AFLW was made I pretty much quit all that straight away and jumped across to footy because I always loved it and wanted to have a kick with my brothers at the park, watch and stuff. Now it was actually a real possibility for girls so I just jumped across.”

Eddey said the “big team environment” attracted her into the sport and said the uniqueness of the game, from having so many teammates to the way it was scored just made it so special. She admitted her bond with a lot of Dragons teammates, and growing up through the pathway alongside them and sharing success with them, made it such a special experience.

“Yeah playing at Sandy’s been awesome,” Eddey said. “There’s a massive group of us who started together three years ago and I think seven of that group have gone on to be invited to the combine which is just awesome. “And a couple of girls got drafted when I was in my bottom year and they were in their top year, they got drafted and that was awesome to see and a real motivating factor to show that it’s a possibility and there’s no reason why you couldn’t do what they’ve done.”

Unfortunately for Eddey, she missed a portion of the season with a bad flu which restricted her to the five games. Whilst she was resigned to sitting on the sidelines and frustrated she could not be out there despite “feeling pretty good physically”, she still managed to have the positive mindset to cheer on her teammates each week.

Despite missing that part of the season, Eddey earned a Vic Country jumper and travelled with her side up to the Gold Coast to run out at the AFL Women’s Under-18 Championships, an experience the teenager loved.

“That was so good,” she said. “Again just playing with those girls from the other clubs is such a good experience. “Meeting all those players and the standard even just in Metro is a step up from NAB and that was such a great experience for all of us and getting that exposure is really good.”

From there, Eddey continued to shine and had the rare feat of being named in the AFL Women’s National Academy. The then 17-year-old could hardly believe it, describing the feeling as “awesome”.

“I was absolutely shocked to be honest,” Eddey said. “The year before i hadn’t played many games before because I had the flu, so I wasn’t really expecting too much and then got the email and that was awesome. “Such a good experience. “We got to go on a camp earlier this year before COVID which was great. “Connecting with all those girls from the other clubs was so cool and playing with them was awesome.”

Eddey has a keen eye for detail and working in conjunction with Dragons’ coach Tam Hyett, focused on improving her versatility on the inside as well as up forward to complement her silky outside game.

“I think with me something with me a lot in the preseason with Tam our coach was just contest work and I think that was a big change in my game, really stepping it up in the contest,” she said. “I go for Hawthorn so I watch a lot of Tom Mitchell, so I’ve watched a lot of how he goes about it because he’s obviously a bit of a ball magnet and it’s just trying to pick up how you get to those inside positions to get the ball.”

Her footy IQ, her ability to read the game and make great decisions are among her best traits, suited perfectly to that outside midfield role.

“I’d probably see myself as more of an outside mid, but Tam and I didn’t want to just limit myself to just being on that outside role,” Eddey said. “You need to kind of have that impact on the inside as well and have that versatility to be able to do a bit of both.”

At about 162cm, Eddey also has the capability of playing as a small forward, which is another area she is looking to focus on for the future, citing the rapid improvement of a St Kilda recruit as a player she could model her game around.

Having effectively “straight swapped” basketball for football, Eddey said she did not take too long to adapt to the game, and it was a lot of thanks to her family for regularly having kick-to-kicks in their spare time, even before she ran out on the footy field.

“I might have just gone down to the park with my brothers and kicked a footy so making that switch across was really exciting because I’d played a couple of games here and there for school but never really done a full season or been a part of a club so it was obviously super exciting and it’s obviously worked out pretty well for me so far and see where it can take me in the future,” she said.

Each year Eddey likes to set goals for herself like any player, but her main aim is to land on an AFL Women’s list. Having made Vic Metro and the National Academy, her next big goal was to reach the elite level, but she also looks at little goals along the way from game to game.

“I set both to be honest,” she said. I have some little goals that I like to chip away at and then I obviously have a big goal in mind which is obviously to get drafted in the next coming weeks. But during the season there are just little goals that I had every game. “Maybe get  x amount of tackles or something like that which I find just keeps me motivated all the time.”

Eddey praised the team at Sandringham Dragons and said she hoped everyone throughout the NAB League Girls competition could achieve their goals be it making it into the league or forging their own paths on their football journey.

“Everyone down at Sandy all the coaches and stuff, they’ve been so amazing helping us all out, especially through COVID,” Eddey said. “I just wish the best of luck to all the girls in NAB League for everything that they’re trying to achieve.”

As for her own goal of being drafted, when asked what it would mean to land on an AFL Women’s list, there was little doubt in her mind of how much of an achievement that would be.

“Yeah it would mean everything,” Eddey said. “It’s definitely something I’ve wanted ever since the AFLW was made. “I’ve just thought about how much it would be awesome to be drafted and to be given the opportunity that not every girl would be able to have the opportunity that we’ve had and it’s really exciting to see even all the younger girls getting around it so much. “It just means a lot to the females in sport.”