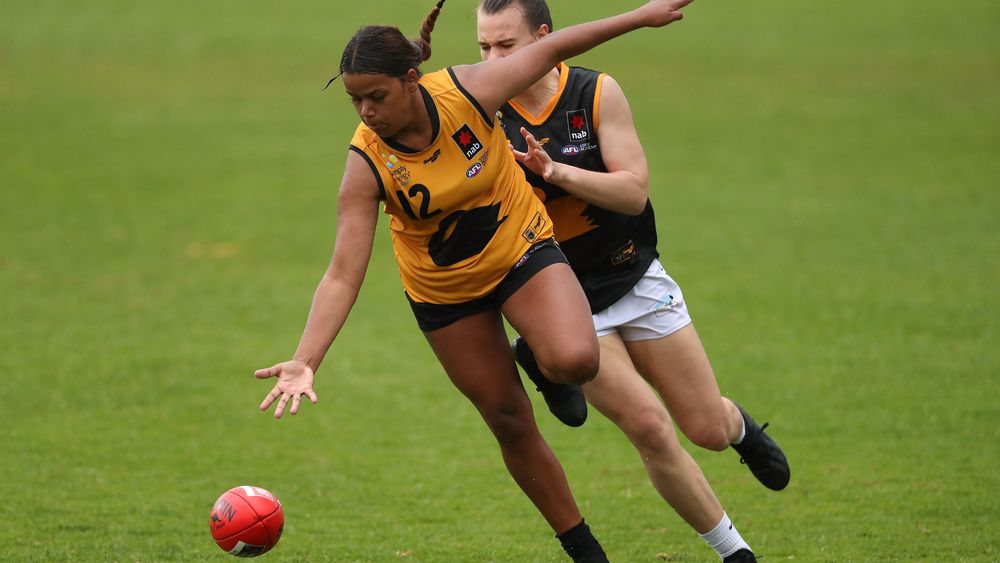 WESTERN Australia’s brightest young stars put on a show and made the most of their opportunities to come away with a 17-point win over the West Australian Football League (WAFL) Women’s All-Stars side in terrible conditions. The Under 18s All-Stars held up well defensively considering the WAFL Women’s side maintained large portions of forward half possession but could not capitalise on the scoreboard with just one goal from eight scoring shots. It was the work of over-age talent Nyra Anderson who was a clear best on ground, starring for the winners and showing her strength and clean hands at ground level.

Along with Anderson, middle-ager Courtney Rowley had a massive first half, and another young talent in Jaide Britton had a huge second half, to assist Anderson and help the teenage side get over the line. For the WAFL Women’s team, Tessa Doumanis was lively up forward and should have had a few more than her one major, as well as had a hand in a few other scoring chances. Along with Doumanis, Sarah Garstone tried hard out of defence, while Tiah Haynes and Chloe Wrigley were also prominent.

Rowley had a huge first term for the Under 18s, seemingly everywhere on the ground and winning it with ease. Despite her performance in the back half and along the wing, it was the All-Stars who looked dangerous early with back-to-back behinds after a rushed behind and missed set shot from Deni Broadhurst had them with the early lead. Liusaidh Gilchrist had a great spoil at half-back as the Under 18s were attacking through the likes of Amy Franklin and Rosie Walsh, but it would be a nice contested mark from Chloe Reilly that earned the first set shot on goal.

Her set shot looked good in the driving rain, but cannoned into the post. It changed the momentum of the game however, as Shakira Pickett and Anderson were busy around the stoppages. Garstone was doing her best under pressure but the wall at half-forward was set up for the Under 18s to control forward half possession. After not much movement on the scoreboard, it took a nice snap from Emily Bennett out of nothing with an open goalsquare to seize the moment and hand her side the quarter time lead.

The second term was almost a counter contrast early after it took 13 minutes for the first goal in the opening quarter. This time, it was some magic out of the middle from Mikayla Morrison leading to a nice Poppy Stockwell mark not long after who made sure of her set shot from 30m out straight in front. It was scrappy, contested footy considering the conditions, but Lou Knitter Medallist, Wrigley was working hard on the inside. Breanne Spencer was a rock in defence with a number of intercept marks, and despite Rowley having a massive game at half-back, it would be the All-Stars who responded on the scoreboard.

Doumas won the ball nine and a half minutes into the term, sidestepped an opponent and was helped via a Zoe Gillard shepherd to put one home off her slick left boot. The WAFL Women’s were back within a kick at half-time with Maggie MacLachlan and Brianna Hyde both having some great defensive moments to keep the opposition at bay considering the possession dominance in that term.

The third term started like the second ended, with the WAFL Women’s team having plenty of chances attacking. Sara Wielstra and Jayme Harkin combined for a quick snap on goal and then Wrigley had one two, but both failed to register a score. A costly 50m penalty handed Dana East plenty of meterage and the Under 18s’ first look forward, but the WAFL Women’s defence was again up to the task. Rowley looked to set Anderson a task in a one-against three contest, but the 19-year-old seemingly did well, bringing it to ground and then using her clean hands off the next stoppage.

Anderson was not only working into the game, she was having a huge say in it. A sharked ball by Grace Wilkie at half-forward saw her pump it inside 50 midway through the term to a one-on-one. In slippery conditions, Anderson kept her feet and just managed to get boot to ball for it to dribble home and extend the lead out to 10. MacLachlan nearly had a goal of her own with a quick snap which missed, but it was Anderson again who bobbed up with a great effort against two opponents at ground level to collect and calmly spin, giving off the handball to the loose teammate in Lauren Quaife who kicked the easiest of goals for her side with two minutes on the clock.

The deficit could have been even greater for the WAFL Women’s side had it not been for Garstone’s intercepting in defence, with the Fremantle delistee certainly putting her hand up to be reconsidered. With a 17-point deficit to their name, the WAFL Women’s team needed something special in the last term, but much like the second term, it was all the Under 18s early. Britton was having a purple patch with a number of good touches, and Franklin pushed forward again had a snap but just missed to the right. Another rushed behind followed and it was the Under 18s peppering the goals now with consecutive behinds.

In the nine-and-a-half-minute mark of the final term, Reilly tried something special off the outside of the boot in the forward pocket, but was touched off the boot before it sailed home. It was her side’s fourth consecutive behind, but they were all but home and hosed. Despite this, the WAFL Women’s side rallied in the last seven minutes to have multiple scoring opportunities that had they gone through, could have seen them steal the win. Unfortunately despite Doumanis having a couple of set shots, and handing a couple more off, all four set shot chances either fell short or missed marginally.

In the end, the Under 18s made more of their goal scoring chances and were the only side to kick multiple goals in a term. Despite neither team kicking a major in the final term, it was tense and hard fought with both sides giving it a red hot crack in challenging conditions. With the AFL Women’s Draft Combine coming up, those players invited will be keen to put their best foot forward after another strong outing in what is their last of the season.