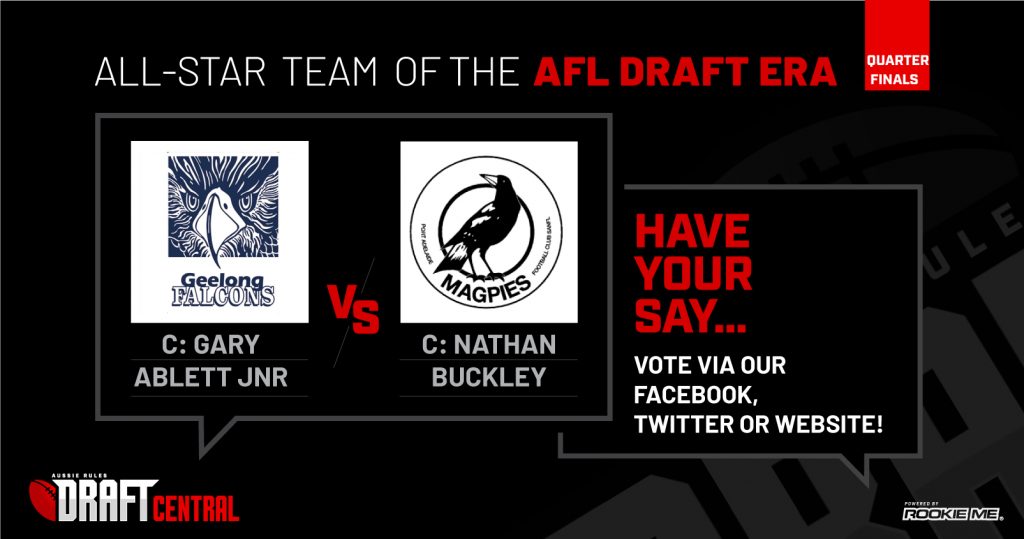 IT is getting serious now. The final four in the Draft Central All-Star Team matchup are the top four seeds which means it is only the best of the best. The four sides are evenly matched with two Victorian teams, as well as one from South Australia and one from Western Australia. In our first semi-final today, we look at Geelong Falcons up against Port Adelaide Magpies.

Geelong Falcons have had the most players of any club reach the AFL, with 153 having made it to the elite level (including those yet to make their debut). The Port Adelaide Magpies are lower down the list with 92, but with an average of 82.5 games between them, the Magpies are ranked second – behind our top seeds East Fremantle (83.1). Even more remarkably, Port Adelaide has had one third (34 per cent) of the players who have passed through the club to go on to reach 100 games, agains second of the top sides with this feat.

The Falcons are still great with 25 per cent, but it is the Brownlow votes and premierships where Geelong comes to play. They sit third of the teams with 50 players or more in the system, averaging 11.2 Brownlow votes per person, third overall behind Port and East Fremantle. They have had 18 premiership players, three more than the Magpies, and only 24 per cent of their graduates fail to play a game at AFL level (28 per cent Port).

Overall both these sides are clearly in the top three overall for top-end quality.

We begin breaking down this match up by looking at the Falcons’ defence going head-to-head with Port Adelaide’s attack. Full-back Matthew Scarlett will likely play a sweeper role opposed to Clive Waterhouse, but could go up and match-up with Warren Tredrea if he starts to get out of hand. Will Schofield might find himself without a pure matchup, but realistically, he could be the one to go to Waterhouse, Scarlett to Tredrea, and allow Tom Stewart to be the intercepting force.

With Nick Maxwell there to come across as third man up, expect Maxwell to take the least dangerous forward, which in fairness is arguably Brett Ebert. Steven Baker would likely lockdown on Alan Didak, with Luke Hodge going head-to-head with Lindsay Thomas, knowing the former Hawks skipper could run off his opponent whilst doing enough defensively to remain accountable. Tredrea’s ability to take contested marks would be dependent on his teammates’ abilities to remain accountable on their direct opponents. Peter Burgoyne could be the damaging option at half-forward to try and make Stewart more accountable as well and the Port midfield would look to hit him up going forward.

Geelong’s forward 50 is ridiculous filled with talent, and could be an All-Australian forward line – right down to the midfielders named on flanks. Having the luxury to play elite midfielders in Ablett and Patrick Dangerfield there is amazing, while Shaun Higgins would be free given he would have less attention than usual with the stars at half-forward. Luke Dahlhaus is the other pocket who is always damaging around goal, and would love roving at the feet of one of the greatest centre half-forwards in Jonathan Brown, as well as champion Bomber, Scott Lucas.

The key for Port Adelaide here is the matchups, because they have so many elite kicks and composed decision makers, that they can also put the Falcons on the back foot if Geelong goes ball-watching in attack. Andrew McLeod, Corey Enright and Gavin Wanganeen coming out of the back 50 – keeping in mind Buckley could roll back there as well – and any loose ball could be picked up and hitting a target back up the field. The counter attack by the Magpies would be sublime. Graham Johncock himself is more than capable too, but he will likely play a more defensive role to keep Higgins or Dahlhaus under wraps.

The key defensive posts in the Wakelin brothers – Shane and Darryl – would have big jobs, but expect Enright to come across as that third option to mark in front of Brown or Lucas. The fact we could see McLeod on Dangerfield would simply be mouth watering, and whichever one of Enright, Wanganeen and McLeod is not taking Ablett or Dangerfield would be the designated user from defence.

Much like everywhere else, this is a beauty. You would hand the points to Matthew Primus over Scott Lycett in the battle of the big men, but an onball group of Buckley, Craig Bradley and Scott Thompson is great, but then you compare them to Jimmy Bartel, Travis Boak and Cameron Ling. One would expect Ling would go to Buckley to tag as the best user of Port’s trio, whilst the speed of Shaun Burgoyne on the wing would be great against Jack Steven of the Falcons. On the other wing, Jordan Lewis and Byron Pickett will go head-to-head and everyone knows neither player will back down.

Of that midfield group, you would hand the points to Geelong because of the depth – keeping in mind Ablett and Dangerfield could role through there – despite Port having the elite talents at the top-end in Buckley and Bradley.

Again Geelong have the edge in terms of midfield depth with the likes of Ben Cunnington and Taylor Adams just sitting on the pine. Lachlan Henderson is also there and capable of taking a Tredrea or Waterhouse to free up one of the rebounding defenders, whilst Maguire is another option. They do not have as many forward options as the Power, so would rely on the midfielders to hit the scoreboard.

On the other bench, Port have plenty of forward options with Scott Hodges kicking 100 goals in 38 games, as well as Brad Ebert a known goal kicker as a mid-forward. Che Cockatoo-Collins kicked more than 200 goals in his career, whilst further up the field, Darren Mead, Michael Wilson and Greg Anderson would assist the Magpies with depth.

This is as tough as it gets. As a general rule of thumb it looks like skill against hardness but that is not to say the opposite teams do not have plenty of the other. Port Adelaide is the most skilful side through this series, whilst Geelong has arguably the greatest top-end talent and balance across the ground. The Falcons are second seed to the Magpies’ third, but you can easily make a case for either side getting up in this one. 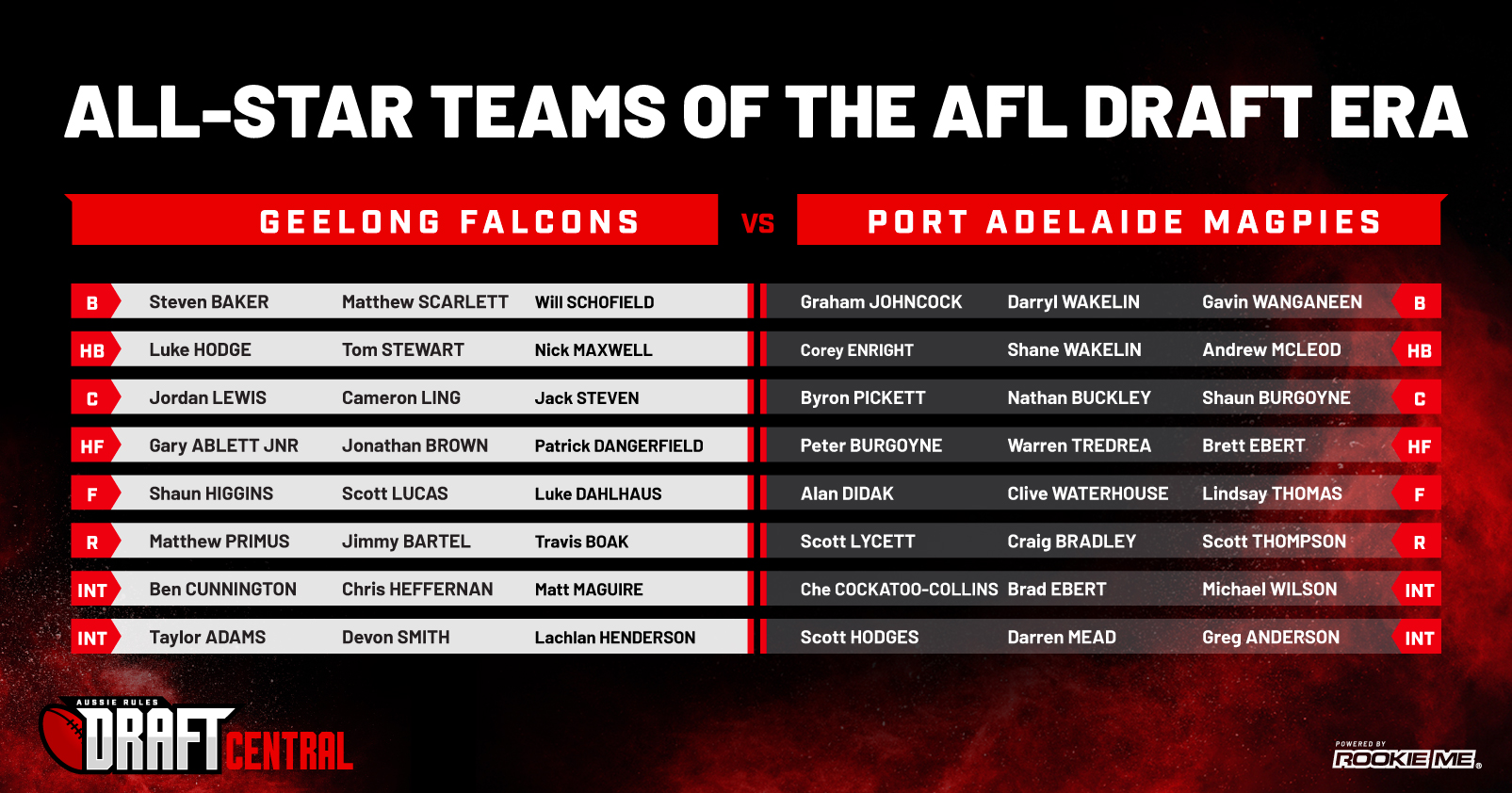