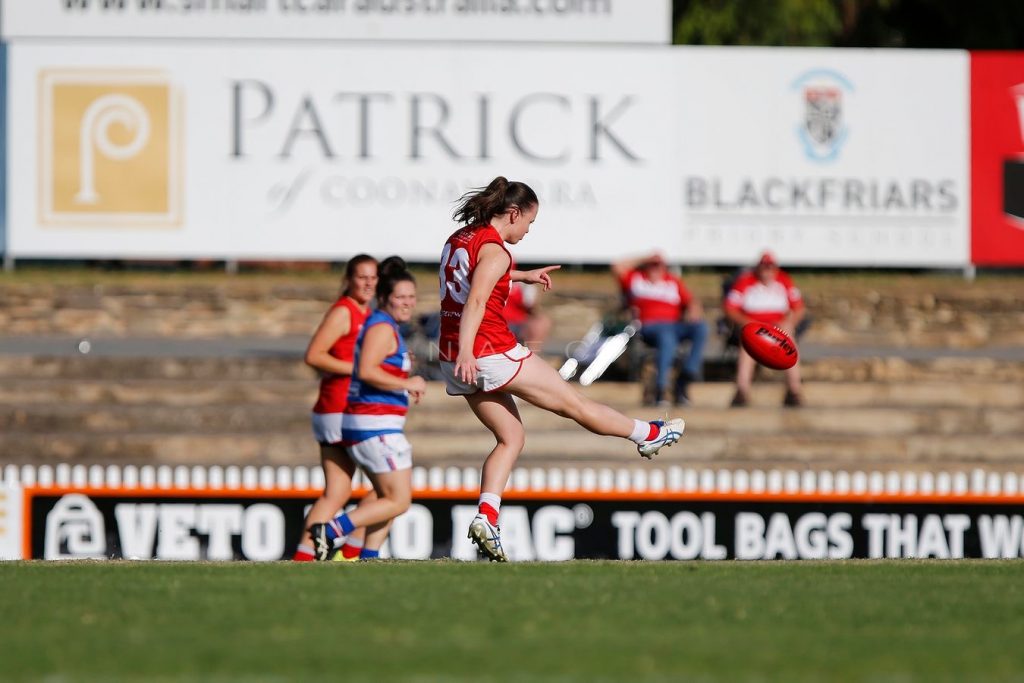 NORTH Adelaide’s Julia Clark by her own admission is quieter than most and despite being told of her abilities and how she can influence a game, Clark was just happy to play her role in 2019. She was happy to do her bit each week as the Roosters reached the grand final, only to fall to reigning premiers South Adelaide. Fast forward 12 months (and a little more thanks to the COVID-19 pandemic) and Clark is instead on the winning end of a South Australian National Football League (SANFL) Women’s decider.

“Yeah it was amazing,” Clark said of the premiership. “I learnt a lot in this season. “Last year was good, but this season I’ve learnt so much and I guess the feelings at trainings was always intense, but it was always good fun. “You always got something out of it, and being around such talented people and having to work harder than I had to work last year just to get into the team every week just really pushed me beyond where I thought I could go.”

Clark said the 2019 grand final loss was a motivating factor for the team in 2020, but said she personally felt she did all she could in that loss. However it was not until master coach Krissie Steen arrived at Prospect Oval that Clark noticed a massive difference in her game.

“Yeah I think definitely for the team it was a big motivator, especially as most of them had lost the finals the year before that and the year before that as well,” Clark said. “I think I was very tentative last season and I just sort of played my role and what I was told to do. “I didn’t really do anything extra, so when it came to the Grand Final knowing it would be my last game of the season, I think I just threw it all out there and personally I think that was my best game.

“So I came out of that loss not feeling bad personally, but knowing that I wanted to work extra hard this year and I think with Krissie’s mentality and really emphasing ‘Dare Greatly’ that really changed my thinking around how my season went last year and how I didn’t do that and what I wanted to put into my season this year.”

Indeed, it was Steen that gave the teenager confidence to take the game on and back herself in her role playing in defence.

“Yeah I think as I said before I’ve learnt so much and I think it’s all because of her (Steen). “It’s great having a female in that role and just like she knows what she’s talking about and you always know that she’s right and she also knows what’s right for you personally and as a team. “If something goes wrong, she can blame herself and I think just vulnerability and you don’t shy away from mistakes, you just focus on the next time you have to do something and just being better.”

Rewinding back a few years, Clark came through the pathway and was always involved with the Roosters in some capacity, and then got the call-up to make her debut in 2019 and has hardly missed a beat since.

“I think my first real taste of footy was at North Adelaide in the Under 14s comp,” Clark said. “The four-game comp. “And that was in 2015 and then in 2016 I went out to Hope Valley because they were the closest club with a girls team and I played Under 16s for one season there and then we managed to get a team in Broadview which is my local suburb. “From there, I kept playing the North juniors in the coming years and I kept getting nominated for the North juniors once that started happening and then went from there.”

Like many young girls, Clark came from a netball background, but once she switched into footy, she loved it and the challenges associated with it, particularly playing in defence.

“I think coming from netball, I think it was just a lot more freedom playing footy and it was something new that I just got to run wherever I wanted and just a whole lot of freedom,” Clark said. “There’s so many things to keep improving on and I just like the challenge of it.

Clark rates her composure with ball-in-hand and decision making as amongst her best traits. Whilst not a massive accumulator, she does not make too many mistakes and is one player that can be relied upon to hit targets out there. She positions herself well in defence, and said she is just hoping to build even greater confidence to take the game on more, and back herself with tackling and growing her overall fitness base.

While Clark’s side did finish the 2020 season undefeated, the defender admitted it was not until the final few seconds of the grand final that she knew her team had it in the bag.

“Maybe a few seconds before the siren went,” Clark said. “But definitely when there was still time left in that last quarter, it was very tense and it was mainly after the siren where you could sort of relax and just celebrate.”

Clark has been in the South Australian State Academy the last two seasons, and it has also been a huge factor in building her confidence.

“It’s been really good,” Clark said. “I think I’m very harsh on myself and I think sometimes I need to remind myself I am a good player and I think the State Academy really helps you realise how good you and how good all the other people around you are. “It’s just amazing to have friends and get up to this level.”

As the SANFL Women’s season usually finishes in May, Clark headed back to her local club last year to maintain fitness and work on areas of her game to be fit and firing for the 2020 season.

“Coming off last season after North Adelaide I went back to Broadview and just wanted to build up my confidence again and coming back to North this year I wanted to take my fitness which is how I maintained place in the team last season,” Clark said. “I just brought that in this season and just really tried to keep my confidence up and with Krissie’s mentality of ‘Daring Greatly’ I just had to push myself every training and every trial game just to make sure I was confident and made sure I was outside of my comfort zone than I was last year.

Rather than another individual, it is Clark’s internal determination that has spurred her on to follow the pathway and chase her dream of playing at the elite level.

“I think my drive has always been that, I’m pretty good at a lot of things and so when I find something challenging, my mentality that I have to master it,” she said. “I have to do everything I can to do everything to be the best I can at it. “So I think that internal drive is what keeps pushing me to keep going and get better and better.”