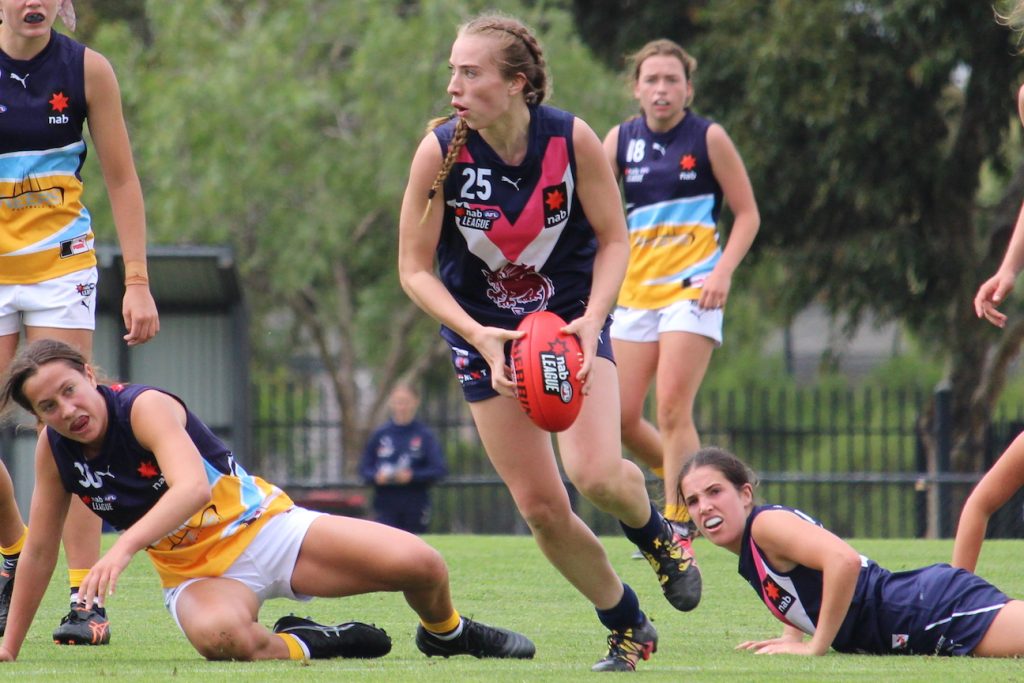 A PIONEER of sorts in the junior female football space, Sarah Hartwig was quick to sign up in the first South Metro Junior Football League (SMJFL) girls competition a decade ago. On the advice of a friend, the now Sandringham Dragons utility and Vic Metro representative decided to give Australian rules football a crack and has never looked back.

“When the South Metro Junior Football League had the very first Girls Football League and my friend Grace – I think I was eight when we started – and she asked me to join with her and I did,” Hartwig said. “I played for St Peter’s Junior Football Club in that league and then as time went by, I played in the interleague for a couple of years and then also played in the School Sports Victoria (SSV) National Championships and that was Under 15s. “Then I joined Dragons for a few years and played Metro a couple of times and now I’m here.”

While many girls her age or in years gone by have not had the ability to play throughout their junior career, the talented intercept marker has been able to do just that, and rise through the pathway. Hartwig has seen plenty of teammates and friends reach the elite level and now in her top-age year, that is exactly what she has set her sights on.

“It’s been pretty fun,” Hartwig said. “Obviously I’ve been playing with a lot of the same girls in the area for a long time. “Like I’ve been playing with (SMJFL opponent and Dragons teammate) Chloe Saultry who I remember I was playing against her since we were like 10. “We are really good friends and it’s cool watching your friends being successful.

“There’s girls I played Metro with last year and heaps of them got drafted and it’s cool watching them play. “It’s a bit exciting, especially where I am right now with the draft coming up in a couple of weeks.”

This year has been like no other, with Hartwig unable to show off her wares in 2020 other than a few rounds earlier in the season. Even with limited matchplay, Hartwig was able to get in a few matches, but then came to a grinding halt. After dominating as a rebounding defender Hartwig was ready to spend more time in the midfield, but the COVID-19 pandemic put a stop to that. Despite the disruption, it has not stopped Hartwig continuing to work on her game.

“Really everyone my age is in the same boat, so we kind of all have to deal with it the same, or different versions of that I guess,” she said. “I’ve just been focusing on my fitness and strength at the moment and I’ll go out with my dad for a kick every week, twice a week, maybe three times sometimes. “But there’s not much you can do at the moment so I just focus on what your goals are at the end of this time (COVID-19 pandemic).”

Hartwig played a half of footy forward last season for the Dragons and was hoping to spend more time in the midfield in 2020, but her best position is undoubtedly at half-back, something she is comfortable with.

“I prefer half-back as a key defender,” she said. “I do like to run down the wing a lot so, but I’m happy to play anywhere. “I’m pretty versatile.

“I would say I’m a good intercept marker which comes along with reading the play in the backline. “It kind of links in together. “I’ve got some good aerial work, mark, punch all that stuff. “I wouldn’t say I’m fast but I do like to run down the wing, have a couple of bounces. “Only when you can.”

Her improvements were going to be adding greater versatility to her game and showing she could run through the midfield, but instead she has had to work within what she can control, which is her strength training and repetition skills training with her dad.

Outside of football, Hartwig is looking to study a Bachelor of Sports and Exercise Science, saying she had played a lot of different sports when she was younger and completed all the physical education subjects at school. That course was something she was looking to start next year, instead taking a gap year in 2020 following finishing Year 12 in 2019.

“I actually finished Year 12 last year and I’ve taken a gap year this year which was a good year to do that,” Hartwig said. “I was planning on working a couple of part-time or a full-time jobs but this year it’s turned out getting JobKeeper because I work at Hoyts Cinema. “So I’m getting JobKeeper from that and I’ve been applying for jobs hoping to get one after COVID. “So I can have two part-time jobs, but if football comes into play I guess I’ll either do that and a job or go to uni next year.”

Over the journey, Hartwig has progressed through the Vic Metro squad at Under 16s and Under 18s level, playing a couple of games as a middle-ager on the Gold Coast for the AFL Women’s Under-18 Championships last year. The tall defender said it was a thrill to be able to take part in that with all the talent around her.

“That was actually really, really exciting,” Hartwig said. “I had a similar experience in the SSV Under 15s Championships and I actually played with a lot of the same girls. It was really exciting because we had all these special speakers and we had all the professional rooms and all the training sessions and all the similar stuff that the AFL Women’s do which was really exciting. “Obviously after that I was able to watch everyone get drafted so that was cool. I really look forward to doing something similar to that again.”

Off the back of that, Hartwig secured her place in the AFL Women’s National Academy and was able to train with St Kilda’s AFL Women’s side over the summer and also travel up to Darwin for the Academy camp which the Dragons talent also enjoyed.

“I was stoked,” Hartwig said. “It was really exciting. “Then again all the other girls who were in a similar boat. I had training with St Kilda for six weeks and that was really interesting. “We got to learn all about what the clubs do before preseason stuff. “Then we also had the trip up to Darwin. “It was so hot, but yeah we had a lot of indigenous education and all the girls really got close which was really exciting and then we were excited for the other camp we had coming up later this year but that didn’t turn out. “What we had was a really, really good experience.”

As for inspirations through her journey, Hartwig said there were so many friends who had made the leap up to AFL Women’s, but one in particular held a special place.

“I’m not too sure (about inspirations),” she said. “It’s hard to say because I have so many friends (playing AFLW). “I have a friend Alana (Porter) who plays for Collingwood and I’ve played with her for a few years. “I played juniors with her as well. “Obviously following her track would be really cool because we’ve been in it together, but there’s no real big inspirations. “I mean there’s the girls who are really good at what they do but no one I’ve stuck to the whole time.”

Whilst the Geelong AFL Men’s supporter is a footy fanatic, she has not chosen an AFL Women’s team yet, saying she likes to watch them all and follow her friends. That is likely to change in a couple of weeks when the AFL Women’s Draft rolls around and Hartwig hopes to end up at one of the eight Victorian clubs. It is a goal she has set herself, and is keen to play out a long career in the game she loves, whatever level that might be.

“Shorter term obviously everyone my age is hoping to get drafted so that’s kind of coming up soon which is exciting,” Hartwig said. “Long-term football wise I would like to play for as long as I can. I guess if I was playing up to 30-plus that would be really cool I think. “I really just have the big goals and the short-term goals that come along the way I guess.”