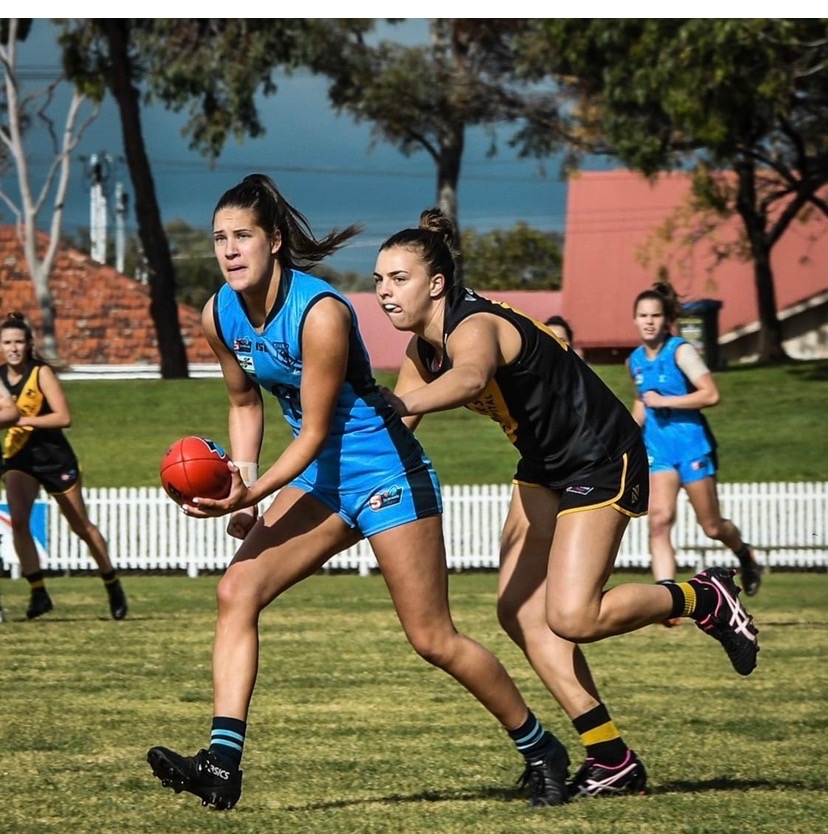 STURT over-ager Izzy Kuiper‘s top-age year might have come to a sour end due to an ankle injury last year culminating in her missing the 2019 AFL Women’s Under-18 Championships, but it has not deterred the inside midfielder.

It was just her first year in the South Australian National Football League (SANFL) Women’s competition after spending a season with her local club, Mt Lofty Devils. Her pathway to where she is today is not too dissimilar to most young female footballers, who were forced to stop playing the game they loved due to limited opportunities growing up.

“I grew up playing netball since the age of seven or as early as you’re allowed to, up until about two years when I first played (football) games for Mt Lofty Devils,” Kuiper said. “Then just enjoyed that and loved that so much and from there decided to quit netball, played at Lofty for the season and then went down to Sturt.

“Then just had heaps of other opportunities arise from that like the Crows Academy, State (Under 18s Academy) all of that. “But i did play footy when I was younger with my brothers so I was at Onkaparinga Valley club which was my local footy playing with my twin brother Zachary. “That’s where it all started and yeah just got back into it about two years ago.”

“I think after Under 13s or something the girls couldn’t keep playing with the boys only because at that age there were no options for a girls teams, so I just had to decide to stop playing and had to go with netty because that was about it for footy, so yeah started back up and we got back into it,” Kuiper said.

For her first season at the top level in South Australia, Kuiper said she immediately noticed the difference and knew she would have to adapt to the faster, more challenging style of play.

“It was just a big step up from Mt Lofty, the skills-wise of everyone was that next level above so it was really exciting you get to play with a good bunch of girls,” Kuiper said. “Love playing with ‘Bevo’ (Georgia Bevan) because she had obviously been drafted to the Crows and come back so it was really exciting to be able to play with her. “Unfortunately I only got to play the four games before I injured my ankle but up until then I was loving it.”

The ankle injury only spurred her on more for what would become an over-age season in the Double Blues, keen to remain fit and play out every game. She managed to do that, but instead this time instead of her ankle, it was a global pandemic that prevented Kuiper from playing at the national championships.

The Sturt contested ball-winner said fitness was a key component that was able to transition from the netball courts to the football field, but otherwise it was a completely different ball game. That suited Kuiper to a T though, finding it easy to pick up where she left off as a child.

“Nah it was really easy getting back into it,” Kuiper said. “I think footy suited me more than netty, like I love to run and be aggressive and lay tackles and stuff, and with netball you can’t do that. “So it was really easy to get into footy and do all those things.”

Kuiper said her tackling pressure and fitness are among her best traits on the field. Certainly a couple of important traits to have when you are an inside ball winner wanting to clear the ball from a stoppage. She did concede she was keen to improve her kicking further and work on her speed off the mark, but her talent was noticed when she was awarded a Breakthrough Player of the Year Award in Round 3.

In the Double Blues’ first win of the season, the then 18-year-old had 18 disposals, five marks, six tackles and four clearances against Woodville-West Torrens. Kuiper said she was thrilled to be nominated for the award.

“It was awesome to get that,” she said. “To be recognised and have a little write-up and a video (on the SANFL website), I just thought it was.. I really loved that. “All the parents loved that.”

While Kuiper is known for her pressure and her role as an inside midfielder, the 172cm contested ball winner used to play on a wing. That was Mt Lofty, but then coaches began to quip “you’re always laying tackles” which is not always the first thought for a winger, prompting her move to the inside, and she has never looked back.

In the time since she has returned to the game, and in particular from her disrupted 2019 season through to her 2020 season, Kuiper said her awareness was one area that had developed in her time with Sturt under new coach, Bruce Dawes.

“My Sturt coach really just harped on being aware of the game and where your person is,” she said. “So it’s about recognising ‘okay someone is already in what else can I do to impact the game?’. “I never really had much thought when it came to footy, I would always see ball, get ball and that was it. “But now I can really see the game and impact the game in other ways if you’re not in at the ball.”

Kuiper has been thankful for her return to football, and none more so than the person she named as her inspiration throughout her journey, Sturt teammate and best friend, Allani Dawes.

“She was the first one who got me back into footy,” Kuiper said. “She was like ‘oh just come out to Lofty, have a run, have a kick see how you go’ just to have a kick. “I was playing netball but I wasn’t enjoying it too much so she was like ‘come out and enjoy it’ and ever since then she’s always encouraged me and been proud of all my success. “She’s someone I can always go to to talk about my game. “So she’s definitely my biggest inspiration.”

Whilst her football career is blossoming, Kuiper was heading down a similar path with her netball, representing Matrix in the South Australian Premier League. While she could have continued down that path, she said she was happy for a number of teammates and opponents who had progressed on to play in the Suncorp Super Netball.

“I love seeing them out there and continuing their netball pathway,” Kuiper said. “it’s super exciting and really good for them that they’ve been able to keep progressing through. “It’s been really good to see.”

While it might have been a calling at some stage for Kuiper, now she firmly has her sights set on the elite level of the AFL Women’s.

“My long-term goal is naturally I’d love to get drafted,” Kuiper said. “But at this point just continue playing in the Sturt side and hopefully going well in there next season.”