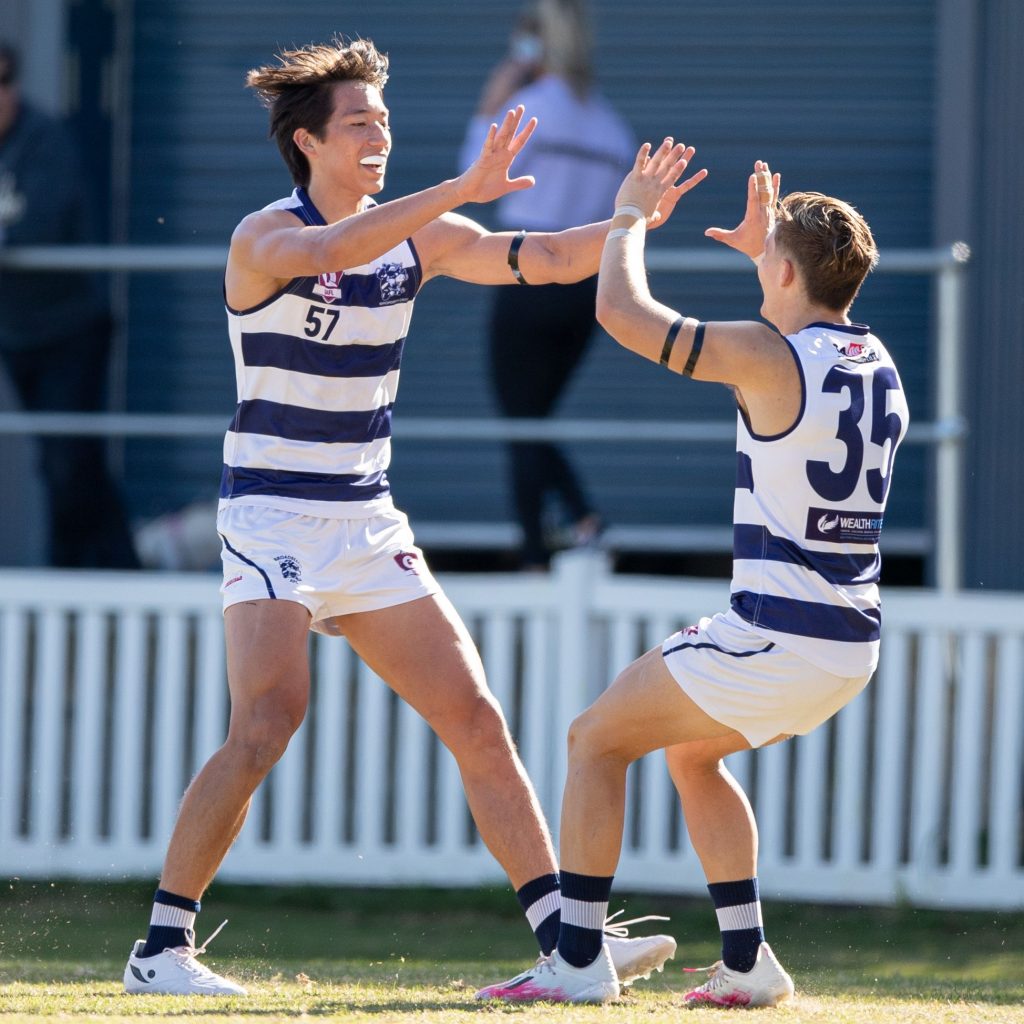 AFTER nine regular season rounds and two enthralling weeks of finals, it all comes down to this. Undefeated minor premier, Broadbeach meets Morningside (2nd, 7-1) in the Queensland Australian Football League (QAFL) Grand Final on Saturday afternoon, and there is plenty of young talent primed to impact on the big stage.

In a new-look QAFL preview, Draft Central again narrows its focus to the young guns in action across the two best sides in the competition, including a bunch of Brisbane Lions and Gold Coast SUNS Academy products. We take a look at who shone when the sides previously met in 2020, while also touching on the strengths of some budding AFL Draft prospects in action.

It took until the final home-and-away round for the season’s two undefeated outfits to meet, with Broadbeach the side which would stand clear after a statement-making 50-point victory. The Cats’ range of scoring options ensure they pulled away strongly in the second half, overcoming some early woes in front of goal to put Morningside to the sword. Usual suspect and former Gold Coast forward Connor Nutting booted three goals in the winning effort, with fellow SUNS Academy graduate Ryan Gilmore and Bailey Reeves also hitting the scoreboard. For the Panthers, who showed plenty of room for improvement, current Brisbane Academy prospects Saxon Crozier and Blake Coleman also found the big sticks, but 24-year-old leading goalkicker Matt Hammelmann was kept to just one major in a big tick for Broadbeach’s defence.

After both earning a week’s rest as the top two ranked teams, the preliminary finals proved a relatively straightforward stage for either side. Broadbeach scrapped to beat Sherwood, who employed some defensive tactics, to the tune of 43 points to book its spot in the decider. It should prove a handy tune-up for the Cats as their defence held up well, though the finishing up forward could do with some sharpening. Meanwhile, Morningside held off a pesky Palm Beach Currumbin (PBC) to advance via a 19-point victory. Crozier, Coleman, and Hammelmann were all again among the goals, but Victorian recruit Matthew McGannon was named best afield for his efforts through midfield. The Panthers will need another big effort from their forwards this coming Saturday.

A race against time will determine whether leading Queensland draft prospect Alex Davies returns to action for Broadbeach. The big-bodied inside midfielder has only managed one outing for the Cats in 2020, and is recovering from an elbow injury which saw him miss the Academy Series. It could be a risk to play him ahead of next month’s draft combine, but he would add clean extraction skills in what is usually the most hotly contested game of the season.

Conversely, another current SUNS Academy player in Aiden Fyfe promises to break the game open for Broadbeach, with his sharp ball use by foot and outside run making for valuable assets when the Cats are in need of a spark. Set to be stationed either off half-back or on the wing, Fyfe looms as a good counter to some of Morningside’s runners. Namely, Saxon Crozier‘s capacity to penetrate on the outer will be a key to much of the Panthers’ success, along with Blake Coleman‘s creativity in attack. Both make up two of the leading Lions Academy prospects for 2020, and have adjusted well to senior football.

Staying with the midfield battle, Broadbeach’s Bailey Reeves has a good mix of ball-winning traits both inside and out, and should battle well against the likes of Toby Triffett and Matthew McGannon, two of Morningside’s prime movers. Up forward, livewire small Josh Gore will look to go big having turned heads in his over-age year. The SUNS Academy graduate should keep a Panthers defence which boasts Nathan Colenso busy alongside the likes of Connor Nutting and Ryan Gilmore. Both Gore and Nutting have booted 17 goals this season.