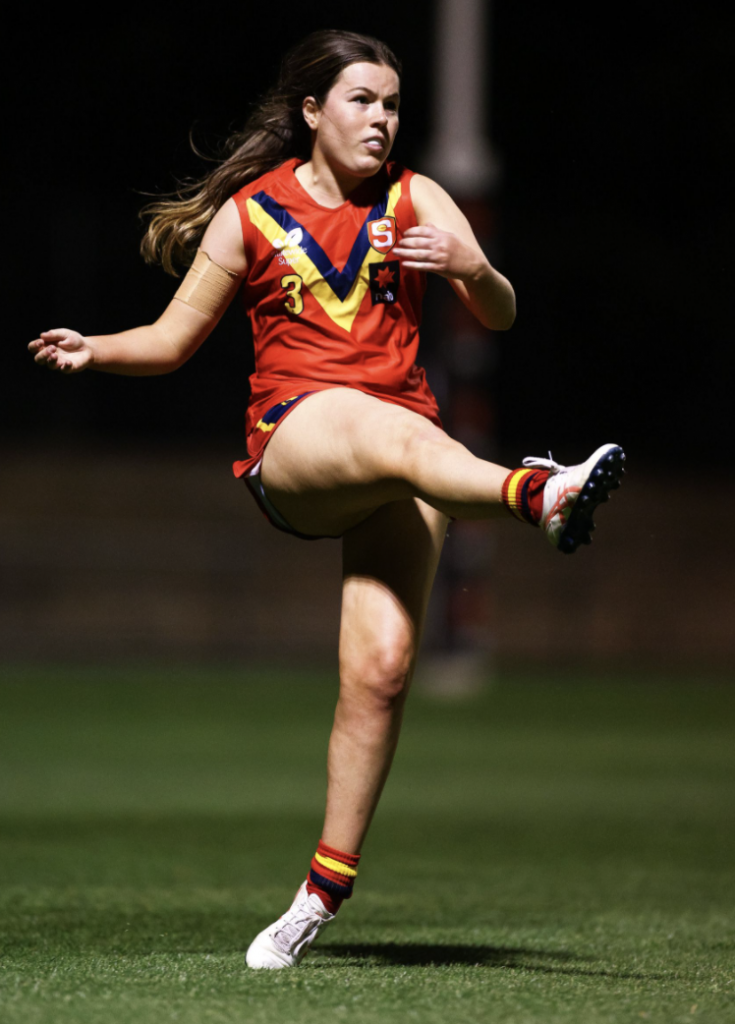 THE ‘sister of’ tag is something which could easily irk a budding AFLW prospect when repeated over time, but Alex Ballard, the proud sister of Gold Coast defender, Charlie gladly accepts the “compliment”.

“I don’t mind it, I think it’s a bit of a compliment if I’m compared to him because he is a good player,” Ballard said. “I think I’m a slightly different player to him, he’s more of a third tall or a second tall, whereas I would like to be that loose defender. But it’s a compliment, I don’t mind it at all.

Fresh off an impressive display in the South Australian Under 18 All-Stars showcase, it’s clear Ballard needn’t look far for inspiration on her own game, with her ever-improving older brother and a certain SUNS star making for the perfect defensive archetypes.

“In particular, (I mould my game on) Jack Lukosius from Gold Coast,” she said. “He’s got a really good kick, so he’s able to get it out the backline really easily and go through the middle which creates a lot of opportunities going forward. “And probably my brother’s intercepting, he’s really good at marking and getting into good positions.”

The 17-year-old is clearly cut from the same cloth as Charlie, boasting outstanding marking ability, a sound kick, and shrewd reading of the play. While she plied a lot of her trade up forward for Sturt in this year’s SANFL Women’s season, Ballard enjoyed a return to more familiar defensive pastures during the recent All-Star dig.

“I think my best position is the half-back flank (as) that defender that drives from the backline and through the middle,” she said. I played a bit of forward at Sturt but that got a bit difficult at times… my greatest strength isn’t my one-on-one play but I am able to read the ball and see where it drops. “Then from there I can look for a short 45 or a long kick to hopefully break through the barriers instead of going down the line all the time.”

Stepping up to senior football, as well as pandemic-related disruptions earlier in the year have seen Ballard also identify some areas of improvement. Among them, Ballard says “everyone can always improve their fitness”, while also alluding to some small fundamental tweaks.

“At the moment my fitness would probably be one (improvement area),” she said. “Hopefully then I’ll be able to do a lot more running throughout the game and maybe spend some time in the midfield if the opportunity comes up. “My ground ball gets too, just being clean off the ground and handballing on the up.

“This season I probably struggled a little bit against the big defenders and just having opportunities to score goals. I’m not really a physical player so I’m not always going to win a marking contest one-on-one against a big body, but I’ll leave my player and intercept the possession.”

The limited training circumstances played into sharpening those ball skills, as well as serving as a much-needed motivation boost amid a difficult period.

“Having to keep up the fitness throughout the break, not being able to train with our teammates and keep up those skills was a bit difficult,” she said. “But as we started to train in small groups, I remembered how fun footy was and it really drove my motivation up.

“Getting out to training was the first step in getting that motivation back, and just seeing your teammates and remembering the bond you have with them. At trainings we weren’t doing contact, so it was mostly just improving our skills and I think that worked really well.”

Having lived and breathed football from all the way back to her backyard kick-arounds with her brother, to junior footy with the Mitcham Hawks, and a long journey with Sturt, there are only a couple of weeks left until the all-important draft day for Ballard. The ultimate goal is clear, and the Double Blues prospect is still doing the “little things” required to realise her big dream.

“Being able to play at the highest possible level would be amazing, so that’s definitely the ultimate goal,” she said. “But obviously you have to do little things before that… you’ve got to take it one step at a time and hopefully that reflects in my game at Sturt, and then hopefully that leads to an AFLW opportunity.

“I’m open to go anywhere at the moment, just because, why not? Queensland would be amazing because Charlie’s there so I’d get to be with him, South Australia too. But at the moment you can’t be picky so I’m happy to go anywhere.”

Ballard will hope to hear her name read out at the AFL Women’s National Draft on October 6.