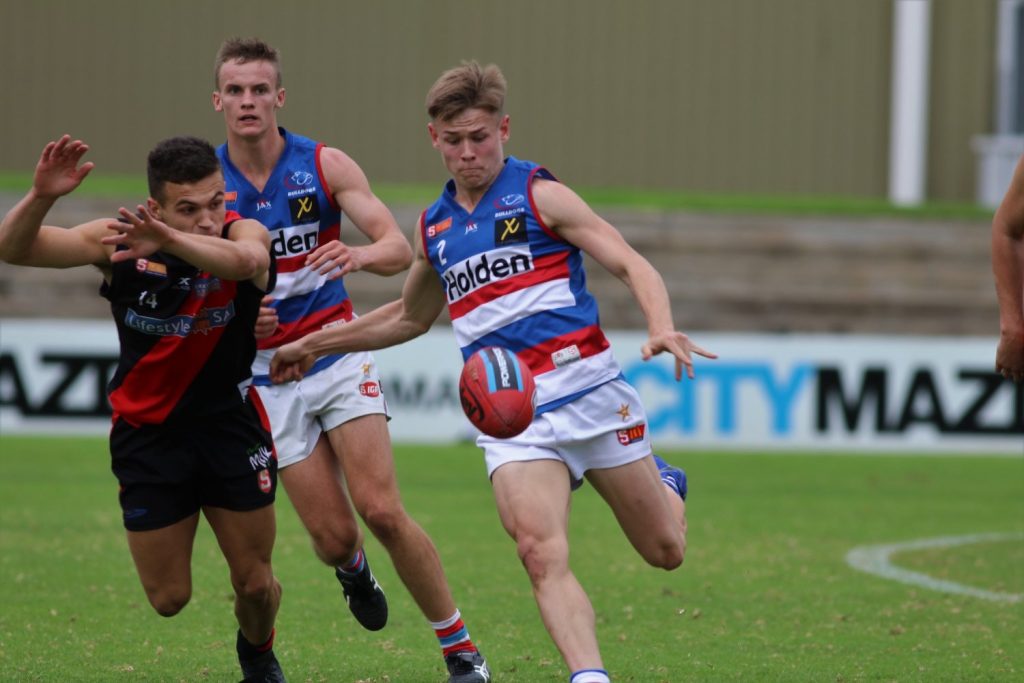 KEEN South Australian draft watchers may remember him as the winner of last year’s SANFL Grand Final sprint, but Central Districts speedster Lachlan Grubb has more in his locker than pure straight-line speed. Sprinting and football run through the 17-year-old’s veins, with his father a former Reserves player at Norwood, while his uncle took out the 1970 Bay Sheffield meet. It makes his pedigree hard to shake, but the youngster is taking it all in his stride, with his genes helping form many of his most damaging traits.

The draft prospect’s pace, agility, and goal sense makes for an exciting package forward of centre, and Grubb has impressed across the senior grades in his top-age campaign.

“Speaking with ‘Bangers’ (Tony Bamford) and my coaches from Centrals at the start of the year, I think the plan for me was to play predominantly in the position where I was likely to get drafted, if I do at the end of the year,” Grubb said. “So playing that small forward role really suits me well with my goal awareness, speed, and being able to evade people with my agility.

“Last year I played six Reserves games when I was 16 so I guess I had the confidence from last year as well. “Especially with the speed of the game and the sort of player I am, I like to move the ball quicker, get out and use my legs, and I think that’s allowed me to show my weapons.

“It was awesome to play two League games (in 2020). “I was pretty disappointed to go back down into the twos but we’ve got a really good team and culture at the club at the moment so our twos are flying, top of the ladder. “Hopefully we can keep that form up heading into finals.”

After a wildly successful reign between 2000-2011, the Bulldogs have not returned to the final game of the League season since. But Grubb, and the Reserves side he has played most of his footy in this year looks primed for a premiership tilt in 2020, having won more games that the League and Under 18s teams combined to remain one game away from a minor premiership. Grubb is relishing the opportunity to play senior football, and at a “pretty good” standard, no less.

“There’s a really good spirit around the club at the moment and obviously heading into finals, we’ve only lost one game this year,” he said. “I’m very fortunate to be able to play finals footy, obviously not many people in Australia are getting to play footy, and it’s all eyes on SA so it’s a really good opportunity we’ve got and hopefully we can go forward and win a flag.”

But the journey hasn’t been completely smooth sailing thus far, with the obvious early setback of a delayed season compounded by injury, the feeling that people are overlooking the Reserves grade this year and most recently, missing out on a National Combine invite.

“We had just done the whole preseason and found out that the season had stopped, and we didn’t know when it was going to come back,” Grubb said. “It was obviously a bit of a stab in the foot, but I guess everyone across Australia was suffering with it.

“Then starting off the season, I missed the first four games with a syndesmosis injury in my ankle. I did all my recovery pretty quickly, thought I was pretty professional with the way I went about that and just tried to get back as soon as possible.

“I played two League footy games, then went back down to the twos and I’ve been in some pretty good form, but I guess it’s just a bit frustrating because not many people are looking at the Reserves this year.

A breakout game of three goals, and bag of five in Round 12 would have caught plenty of eyes, though, with Grubb garnering some attention from AFL scouts. Having spoken to a couple of clubs recently, the youngster is also moulding his game on a couple of speedy Richmond favourites. Although, he doesn’t support an AFL club at the moment.

“I actually don’t (support) an AFL team,” he said. “Everyone did when we were growing up with the Crows and stuff, but it’s a bit weird, I don’t actually support an AFL team at the moment. “Dad goes for the Pies, they have a bit of a special spot in my heart.

“Shai Bolton from Richmond, I mould my game on him. “Just his speed and his pressure – pressure has been a massive improvement for me this year, obviously that’s been the main feature to use my speed to get to players quicker. “At the start of the year I was more of an offensive player rather than a defensive player, so really just trying to hone in on that pressure role as a small forward. “Shai Bolton is definitely one I mould my game on and players like Jason Castagna as well, who can also roll through the forward and wing position.

“The main feedback (from AFL clubs) for me has been just that defensive pressure. “At the start of the year, it wasn’t as good, but it’s been really improving over the past few months of games.”

With help from manager Michael Doughty, a 231-game player at the Crows, Grubb has also taken on extra craft sessions throughout the week. Along with school, sessions at his local JT Performance Centre gym, training with his athletics coach, and regular commitments with Centrals, it makes for a pretty packed week. But as a “laid back” character by his own assessment, Grubb has been able to use each opportunity to his advantage.

“Life’s pretty good in SA,” he said. “School’s been pretty easygoing this year, I’m a laid back sort of a guy so I don’t get stressed over too many things. “The coronavirus hasn’t really effected me too much, I think I really bounced back from it pretty well… (it has been) pretty hectic but I don’t mind it.”

Nearing the end of his top-age campaign, there remains one big goal for Grubb to tick off, but a series of smaller ones come first.

“Obviously the main goal at the end of the year is to get picked up by an AFL club, that’s my dream since I was a young kid,” he said. “But (I am) just setting little goals and trying to play some consistent footy. “I guess I haven’t really been seen much over the last couple of years, last year was my breakout year. “Obviously all the other guys have played a lot of state footy, so I guess I’ve been coming from behind of everyone.

“I’ve just been trying to put some consistent games of footy together to really showcase what I can do to all AFL clubs. “Tackle numbers every game, trying to get that down pat, and then obviously finishing off my goals, because there was a couple of games where I kicked a few points this year.

“If footy doesn’t work out, there’s a lot of things that I can look to. “I do pretty well at school, I’ve got good grades this year and have really honed down on my Year 12. “I’m pretty good at psychology, so maybe just some sort of sports psychology at Uni. I like teaching the younger generation so maybe PE teaching at uni or something like that, too. But I’m really open to anything at the moment.”

Grubb sought to thank his family for their ongoing support, as well as his Centrals coaches for their help throughout the season, and his manager for the effort and time put into him this year.