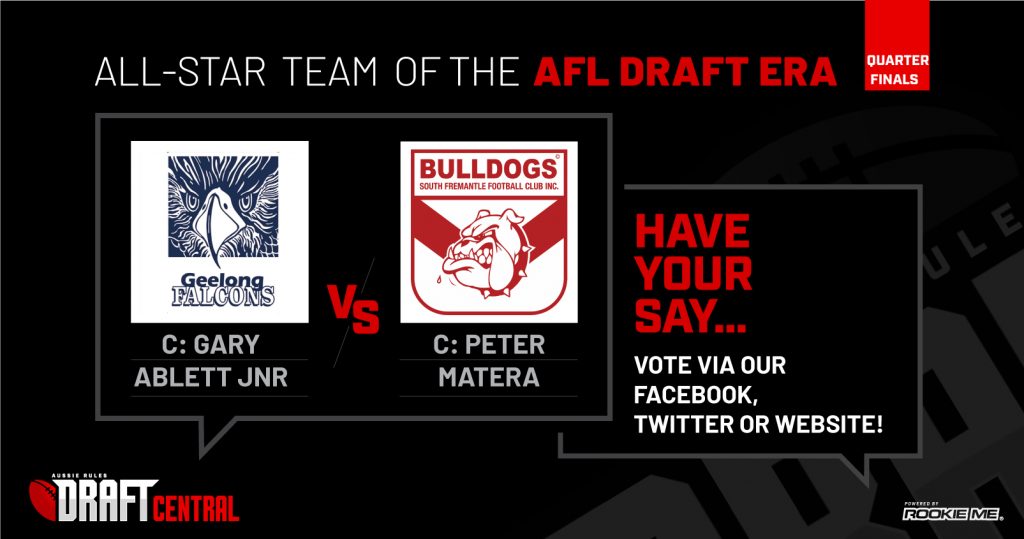 OUR next All-Star Team battle makes for another intriguing quarter final clash, set to play out between a powerhouse Victorian region and West Australian club, in the Geelong Falcons and South Fremantle Bulldogs, respectively. The two captains voted in by the public as the All-Star Players of the AFL Draft era were ‘the little master’ Gary Ablett Jnr (Geelong Falcons) and West Coast great Peter Matera (South Fremantle).

These clubs are seeded second (Geelong Falcons) and 10th (South Fremantle) respectively, meaning the Bulldogs will be made to pull off another upset in order to advance. Our proposed Falcons squad outvoted the Greater Western Victoria Rebels after a first-round bye, while South’s path to this stage came through Claremont and the Bendigo Pioneers. The winner will qualify for the semi finals, set to face the Port Adelaide Magpies/Dandenong Stingrays.

While there lies plenty more glitz and glamour further afield, a solid starting point is the stingy defences of either side. Geelong’s is one of the best of the lot, boasting premiership skippers Luke Hodge and Nick Maxwell at half-back, while Geelong pair Matthew Scarlett and Tom Stewart take up the key position posts, and Steven Baker takes up the opposite pocket of Will Schofield. If you’re left wanting more, the versatile Lachlan Henderson and Matt McGuire await rotation from the bench, potentially adding a touch more height to deal with monster key forwards. The marking power is evident, as is the pure defensive nous, and leadership in spades. Baker’s addition also adds a much-needed small option, able to lockdown the liveliest of opposition forwards.

We feared there would be no match for the Geelong defence, but alas, South Fremantle’s back six comes in strong. The Bulldogs lay claim to a premiership captain of their own, in outgoing Essendon coach and Eagles champion John Worsfold, who slots in alongside fellow West Coast great Glen Jakovich at half-back. With the ever-reliable Darren Gaspar and James Clement behind them, it would take something special to penetrate South Freo’s last line. Let’s not forget Paul Duffield in the pocket, along with ‘Miracle on Grass’ hero Ash McGrath at half-back, who add a different dimension to the back six.

On paper, these defences are difficult to split. Balance is a key aspect to the equation, slightly favouring South, but versatility looks to clearly be in Geelong’s favour, with the bench depth allowing for a good range of possible lineups. The players themselves, namely Hodge, Maxwell, and Stewart can play a variety of roles down back both below and above their heights, but the key position strength remains. We’re sticking with the Falcons here, just.

Two contrasting midfields also do battle when these sides line up, with the Geelong side boasting a rich vein of ball winners, while South Fremantle’s prime movers are most significantly based on the outer. Local Cats premiership players Cameron Ling and Jimmy Bartel feature at the heart of Geelong’s engine room alongside Travis Boak, making for a durable trio which balances both sides of the game well. South also lays claim to a tagging centreman in Clinton Jones, who is joined by Fremantle stalwart Peter Bell and current Eagles star, Tim Kelly. In terms of credentials at the centre bounce, Geelong takes the chocolates. That’s without touching on the ruck battle, which looks to also favour Geelong as Matthew Primus opposes Jaymie Graham.

But on the outside is where it gets interesting, with Matera and Nicky Winmar making for one hell of a fine wing pairing. Jordan Lewis and Jack Steven are no slouches, but would have their hands well and truly full with those two for opposition. Steven’s prime running power would serve him well, as would Lewis’ hardness and ball use, but we feel the Bulldogs have their counterparts found out in this area.

Then there is the question of depth, which will also spawn a later talking point. Geelong could well make up three or four centre bounce combinations to rival that of every club, but see many of their midfield options squeezed out to flanks or the bench. While South Fremantle’s proposed engine room is the cream of its crop, Geelong has the like of Patrick Dangerfield, Ablett Jnr, and Shaun Higgins up forward, while Taylor Adams, Ben Cunnington, and Devon Smith remain benched. That kind of depth is scary, and proves another tick for the stacked Falcons side.

As alluded to, the weight of Geelong’s midfield depth somewhat hinders its balance on other lines, namely up forward. While the likes of Dangerfield and Ablett Jnr are both no strangers to the forward 50, their work as midfielders is what they are primarily known for. Add Higgins into the mix, and that’s three of the four flanks/pockets filled up by improvised forwards. Luckily, they may not be needed much at ground level with Scott Lucas and Jonathan Brown in the key position posts.

But we feel the balance of South Fremantle’s front six looks much better. Peter Sumich is a terrific spearhead, aided aerially and in strength by Brad Hardie and Allen Jakovich, while true smalls in Phillip Matera and Jeff Farmer are joined by Mark Williams, who made the ‘shotgun’ celebration famous (or, infamous). Add Andrew Krakouer and Ashley Sampi to the mix off the bench, and you have a truly dynamic forward set-up, laden with x-factor and match winners. It gives the Bulldogs a good edge over Geelong, despite its overspill of talent.

While South Fremantle lays claim to some important points of difference over the second-ranked Geelong side, it is difficult to look past the Falcons’ weight of elite talent. Geelong’s midfield and defence come up trumps, and there is plenty of firepower up forward despite a lesser structure when compared to South’s. We’re taking the Falcons. 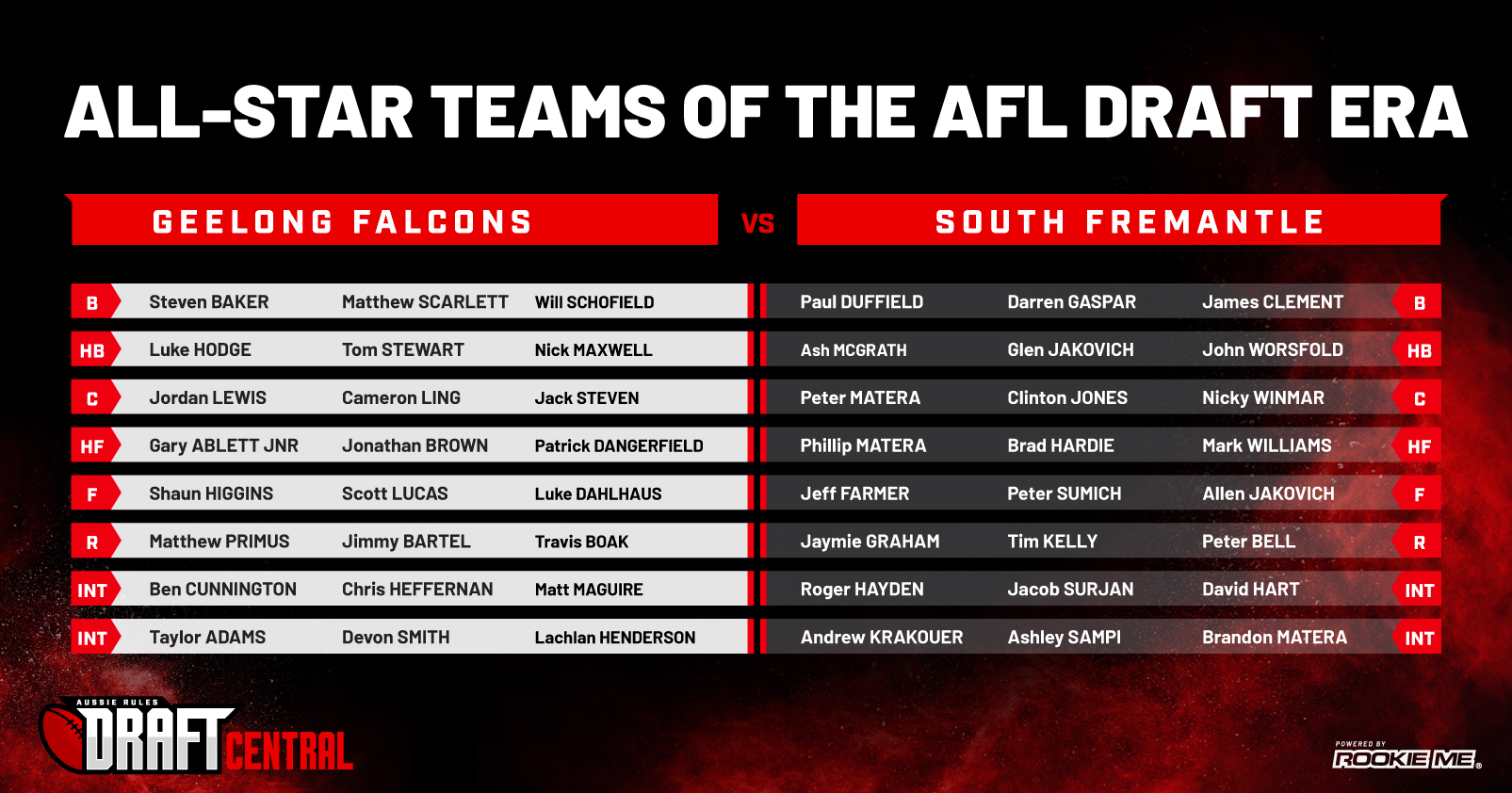 Which All-Star Team do you think would win?
Created with QuizMaker