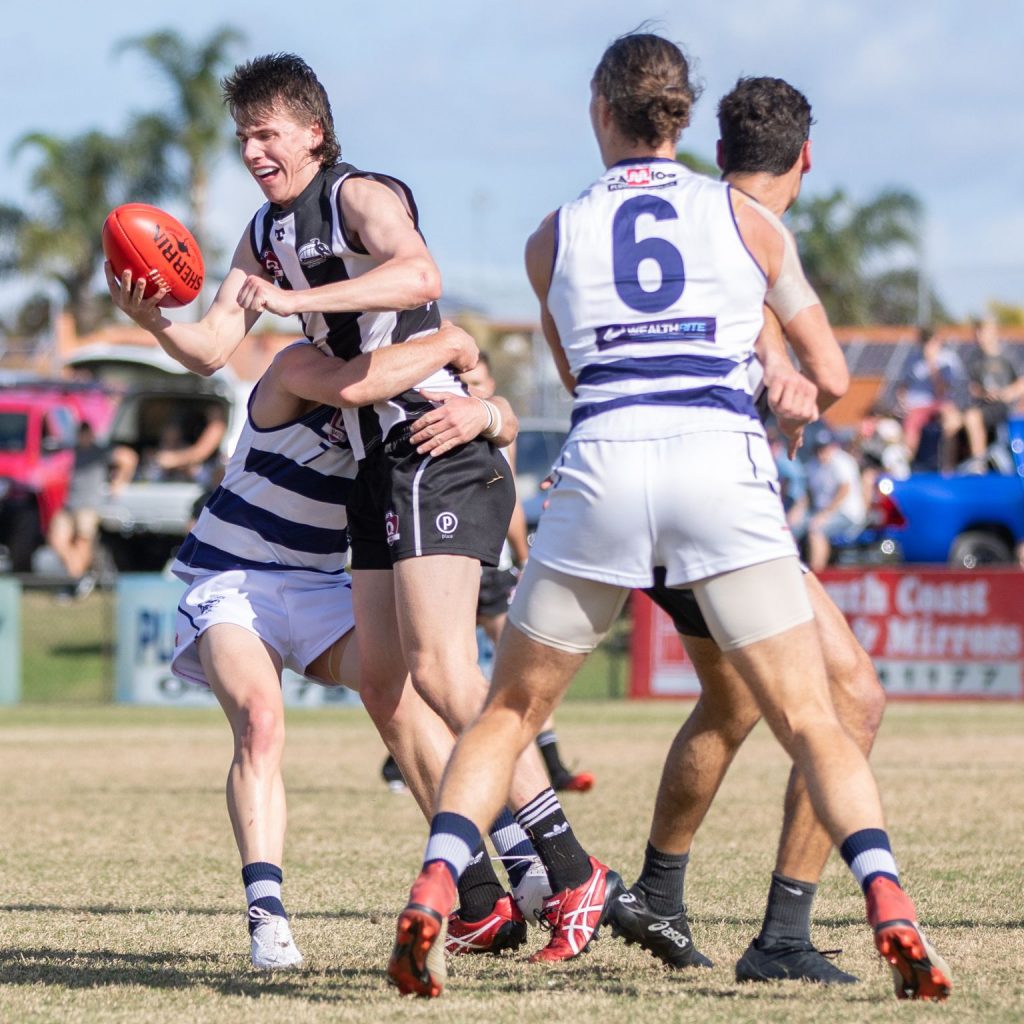 IT was semi-final weekend in the QAFL, and the competition’s two best sides performed superbly after their week off. Broadbeach were far too good for Sherwood, keeping them to just four goals in a 43-point victory. Morningside led comfortably for the majority of their clash against Palm Beach Currumbin on the back of strong performances from Matthew McGannon, Nathan Colenso and William Pendlebury. They ran out 19-point winners, thus ending Palm Beach’s recent stranglehold on Grand Final day and setting up a blockbuster. It will be Morningside’s first QAFL decider since 2015, while the undefeated Broadbeach will be hoping to avenge their 2018 Grand Final defeat. When the two teams played each other earlier this month, Broadbeach got the chocolates with a thumping 50-point victory. This was a Broadbeach home game and Morningside’s only loss of the season to date, so fans should expect a closer contest next Saturday.

Coleman has had a fantastic draft year and put in another impressive performance against Palm Beach. The Brisbane Lions Academy prospect started the game on fire, kicking the first goal of the match just two minutes in. This came from a set shot after he earnt a free kick for a hold in a one-on-one contest deep inside forward 50. Coleman is such a dangerous threat in one-on-one situations because of his amazing combination of strength, speed and agility, so his defenders often panic in these situations and give away cheap free kicks. Coleman showed how skilled he is when he produced a brilliant handball in the first term on the up, out of congestion, to a teammate in the corridor. This started some great running play by his teammates and resulted in a goal. Coleman has great versatility too, because he can fly aerially with his fantastic leap or stay down and use his pace to crumb the contest. Despite predominantly being a forward, he usually also gets some midfield minutes because he is a clever stoppage player. However, he was not given many opportunities in the middle on Saturday.

This was one of the best games I have seen Crozier play, which speaks volumes given that it was a semi-final. He played his usual wing role and ran very hard to impact the contest offensively and defensively. Crozier pushed forward on multiple occasions to take uncontested marks inside 50 and earn shots at goal. Although he missed one shot in the first term, he made up for it with a lovely set shot in the third. Crozier’s great fitness level and willingness to push to the next contest made him very difficult for the opposition to stop, as he got a lot of handball receives and frequently found himself with plenty of space on the wings. He has clearly mastered the art of controlling possession as well, as he chipped the ball around a lot in the defensive half with teammates. This helped his side regain composure when Palm Beach started to get back into the game, and it was handy in the last quarter because it took some time off the clock. Crozier’s performance was fantastic and he will undoubtedly be one to watch in next week’s Grand Final.

Colenso had an outstanding game at half-forward for Morningside. He started the match with a beautiful front and centre crumb on the 50, and then quickly gave the ball on the up to a teammate running past. This early possession gave him some confidence, and it led to him flourishing for the rest of the match. His game style is very well suited to finals footy, as he shows a lot of aggression towards the contest and his opponents when they have the ball. This was highlighted when he laid a strong tackle in the forward half to earn a holding the ball decision in the first term. Colenso is a great long kick of the footy, as shown when he nailed a set shot from just inside the 50-metre arc. He followed this up just moments later by setting up another goal with a lovely weighted kick to a teammate. Throughout the day, Colenso applied some strong forward pressure and used his strength to shrug off tacklers and keep his feet after contact. His body use in marking contests was fantastic and he linked up well with other forwards, including Coleman and Liam Dwyer, to set up scoring opportunities. Colenso had a passage of play in the second quarter that was definitely one for the highlight reel. It started at half-back when he took the ball cleanly, drew an oncoming tackler and fed the handball inside to a teammate. He then pushed hard forward to get on the end of the play and kick an important goal for his side on the run. Colenso was a strong contributor for Morningside and he will be hoping to thrive once again in next week’s decider.

Triffett had some good moments for Morningside in their victory. In the first term, he took a fantastic overhead mark on the wing whilst under pressure and linked up well with teammates to transition the ball forward. He spent time in the midfield throughout the day, where he read the ball nicely off the hands of the ruckmen and won some contested possessions and clearances. In the second half, he laid plenty of strong tackles and gave no space to his opponents at stoppages. He capped off the game with a smart kick inside 50 to find Dwyer in the last quarter for a scoring opportunity.

Fyfe is an athletic half-back that played his usual intercepting role beautifully for Broadbeach. He has a great leap and strong hands, and he sits off his opponent while getting into great positions behind the play so he can use these attributes to stop the opposition’s forward bursts. This was evident just before quarter time when he took a brilliant intercept mark in the middle of the ground and delivered the ball nicely to forward Jordan Moncrieff. Although Moncrieff’s marking attempt was well spoiled by a defender, the play still led to Broadbeach’s fourth goal of the day. Fyfe is a good ball user in defence, as he has an effective left foot kick and can also deliver cleanly on his right. He is a crafty player as well, which was shown when he cleverly snapped a pass around an opponent to find a teammate on the wing in the second quarter.

Gore was very lively up forward once again for the Cats. He applied some great forward pressure by using his electric pace and strong tackling ability. At forward 50 stoppages he frequently burst through the contest at speed and took opposition players with him, thus creating space for his teammates. Gore was also good at pushing up to the wings to provide a lead-up option for teammates coming out of defence. He was confident taking marks in the hands and his kicking was quite efficient. Gore only kicked one goal for the day, but it was an absolute gem in the second quarter. He drifted off his opponent into the pocket to take a nice mark, then he went back and kicked a difficult checkside from tight on the boundary. This gave Broadbeach a healthy lead and they never looked back.

Reeves had a solid impact for his team on the wing. He is one of the hardest runners offensively and defensively in the Broadbeach side, and his willingness to produce second, third and fourth efforts was on show once again in this game. This was particularly evident in the second quarter, when Reeves worked hard to get across and commit an important spoil inside his side’s attacking 50. He also regularly picked the ball up cleanly, held his own in marking contests and attacked the footy with ferocity. Although he did make some disposal errors as the day wore on, he never dropped his head and always worked to redeem himself at the next contest.

Briskey was one of Sherwood’s best performers on Saturday. He played as a deep defender for most of the match and was extremely reliable, frequently using his size and strength to win or halve one-on-one contests. Broadbeach were great at locking the ball in their forward half and getting repeat inside 50s, so Briskey and the other Sherwood defenders were under constant pressure all day. Despite this, Briskey continually stepped up for his team defensively. He always positioned himself well, gave his opponent no space to work with and saved some certain goals with fantastic spoils. Briskey also laid some strong tackles in the defensive 50, attacked the ball hard in congestion and provided an option for teammates to link up with coming out of defence. While his performance was mostly strong, Briskey did make some skill errors throughout the day. In the third term, he took a brilliant intercept mark in the defensive goal square but immediately turned the ball back over with a poor kick down the middle, luckily resulting in just a behind. In the final term, Briskey was pushed forward to give his side a strong leading option. He took some nice marks and provided a decent presence up there, but unfortunately it was too little too late for Sherwood.