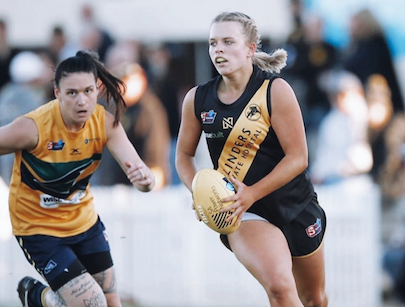 SOME players might struggle to get out of bed on a Saturday for an afternoon game, others might ride a casual 150km. Glenelg inside midfielder Tessa Kohn was certainly the latter, prior to entering the South Australia National Football League (SANFL) Women’s competition. The elite cyclist admitted she “didn’t take it (Under 18s footy) seriously” and cycling was what had taken her to high levels.

“Well I got in through talent identification, I started that in Year 8 because of my running abilities they were good, so I got in and I did that in Year 8, 9, 10, 11 and 12 for five years,” Kohn said. “And I did Oceania’s and I got placing at Oceania’s and stuff like that. “I would go to Nationals and basically I was riding 14 times a week or like 10 times a week or gym sessions. “Footy was just fun in Under 18s, I didn’t take it seriously. “Basically I would race or ride 150km on a Saturday morning and rock up to my footy game on Saturday arvo.”

Times certainly changed once she moved into the League competition, winning the Under 18s best and fairest despite focusing primarily on her cycling. Over the off-season, Kohn moved up from her Under 18s role at Morphettville Park to play for Glenelg and have a breakthrough season. Prior to that, the talented teenager represented Sacred Heart in the college competition each year, but had not taken the plunge just yet. In her final year of school, she decided to make that step up.

“Last year I thought ‘oh I might give it a crack in an amateur league’,” Kohn said. “So I started playing for Morphettville Park in the Under 18s and the Women’s teams. “I played about half a season there (Morphettville Park) and then went to Glenelg.”

While some players might have struggled to get up to speed with the new sport, Kohn said her aerobic capacity and playing other sports as a youngster had allowed her to smoothly transition into the oblong-shaped ball game.

“Well I have always been into sport so it wasn’t that hard,” Kohn said. “The skill part I was obviously still developing and I still had to pick that up, but the aggression and attack on the ball wasn’t that hard to pick up. “It was just the preseason gave me a really good look. “We had a lot of trial games leading up to the season so that made it a lot less daunting. “After the first game, all the nerves were gone and I reckon I was ready to go. “After just 10 games I have learnt quite a lot.”

She certainly proved she belonged at the level, taking just four rounds to earn a Breakthrough Player Award for her efforts on the inside. In the loss to Woodville-West Torrens Eagles, Kohn had a game-high 18 disposals, as well as seven clearances and five tackles – in just her fourth game of senior football.

Kohn said she did not know what to expect coming into the competition, having dominated at Under 18s level for Morphettville Park, as her 2019 league best and fairest award attests to.

“Prior to Glenelg I played in the Under 18s at Morphettville and I played pretty much in the midfield and I pretty much dominated that,” Kohn said. “Because of that I didn’t know where I was going to play. “I thought because of the female team I’d be put on a wing or something. But after our first few trainings and me going and taking time, I think about two months to get my skills up to date with everyone else’s…. I was always playing in the mid but they started playing me as the attacking mid.”

Transitioning from the outside to the inside and Kohn’s exact role for the 2020 season took plenty of discussions amongst the coaching group, but in the end, the 18-year-old lined up onball. Unfortunately following that breakthrough performance in Round 4, everything Kohn had worked for had come to a grind halt.

The SANFL Women’s competition was postponed and would not restart for another few months, and Kohn was back to cycling to stay fit. It allowed her to not only maintain her fitness, but come back stronger and more driven, particularly when one Ebony Marinoff arrived at training and raised the bar for the rest of the playing group.

“That was actually an amazing experience,” Kohn said. “It was really, really nice seeing how hard ‘Noffy’ (Marinoff) trains and seeing the levels I need to be at. “Basically I had a trial game and that was with the Bays girls, so just an internal trial. “So the three Adelaide girls were on one team and I was on the other team and basically when I played or against them, it just rose my levels so much higher. “I feel like by COVID happening it was the best thing for my footy career because I’ve had three or four girls back from the AFL who are absolutely amazing. “It just made me realise, it rose our training levels and our game levels by a lot more and it made our skills and everything a lot better.”

Kohn said playing with and against AFL Women’s players lifted her game, but she was not phased by the challenge of taking on South Australia’s top footballers. Except Adelaide best and fairest winner Anne Hatchard who Kohn admitted was “a bit intimidating” to play on and named her as her toughest opponent “by far” to play on.

Assessing her on-field performance, Kohn said her clearance ability – leading the league in clearances after four rounds in her debut season – running and perseverant attitude were among her strengths, as was her attack on the football. As for areas of improvement, she is still building up her skills and working on some athletic traits, with the off-season a key focus for her strength conditioning, vertical jump and 20m sprint.

Her skills have been a work in progress, but Kohn is always striving to be the best possible player she could be, and her work through repetition helped her get up to standard.

“Well because I’d already played touch footy, I already had ground balls were like I was good at and handballs,” Kohn said. “And because I played basketball at a high level, my marking was fine. “It was just my kicking, so I reckon in preseason for about five months, including COVID the time there, I just kicked the ball every day, I was just so determined to get out on the field and not be the one of the worst kicks. “I didn’t want to let my team down. “Especially because I get so many clearances, I can’t have a terrible kick if I’m ripping it out of the pack trying to get it forward.”

It is no surprise to see her teammate Marinoff as one of her inspirations, having seen first hand how hard she worked week-in, week-out and wanted to become the best possible player she could be on-field.

“I don’t really have a football idol because I came in so late and I believe with athletes, I believe that in how hard they work,” Kohn said when asked of an inspiration along her football journey. “But I would say because of COVID and how the AFLW girls came back and I would say with Ebony Marinoff and how I would rotate with her through attacking mid from the forward line and she was just her intensity and the way she would help me out so I would understand. “She was such a good coach/player. “It was just how many extra hours she put in the gym and on the running field. “It was just inspiring to see what I need to do to get to her level.”

For Kohn, it is about nailing the fundamentals and giving herself the best preparation available to play at the elite level. She said she dreams of playing at the top grade one day, hopefully sooner rather than later, and has her sights set on having a big preseason and huge 2021. Not only does she want to make the grade, but succeed at it.

So how does she intend to build on her game? By adding further strings to her bow and making her game more consistent across the board. A by-chance role in the forward line for the South Australian Women’s All-Star game helped her come up with an idea for next season.

“I’ve actually had a conversation with my coach and in the All-Star game I felt really, really comfortable in the forward line and I never felt comfortable in there,” Kohn said. “I feel like next season I want to be, my midfield work is generally pretty good, it’s just some decisions and timing that I’ve got to improve on, with obviously just a few skill errors. “If I perfect and get way better at my forward line stuff, I’ll be a good all-around player. “That’s my main goal. “My main goal is just kicking goals, I want to be able to get a lot of goals and clearances.”

Having finished third in Glenelg’s best and fairest this year, it is fair to say that Kohn had some sort of debut season. With her eyes well and truly set on the prize in 2021, expect her to continue to build on her talents and be one to watch next year.