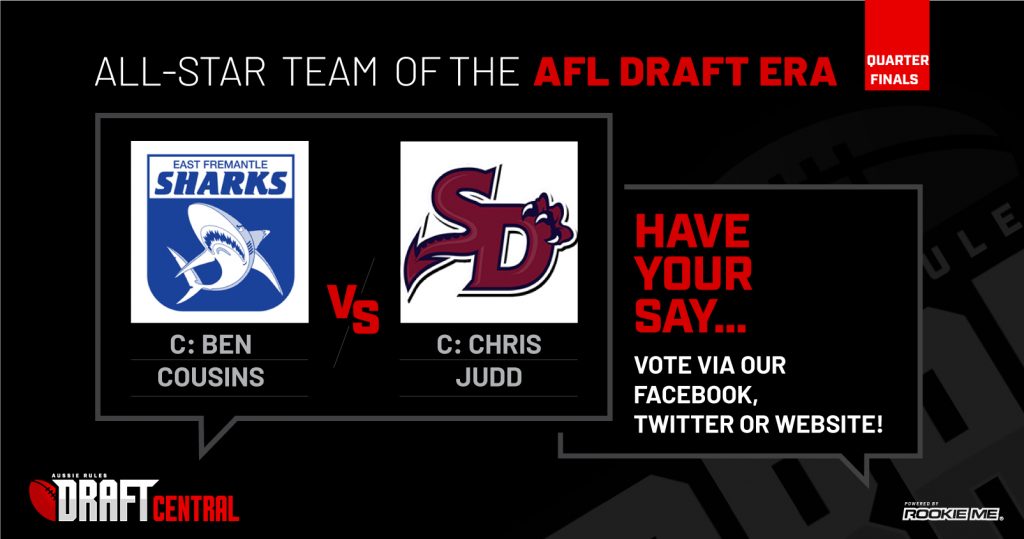 OUR next All-Star Team battle makes for the first quarter final clash, set to play out between a West Australian club and a Victorian region, in East Fremantle and the Sandringham Dragons respectively. The two captains voted in by the public as the All-Star Players of the AFL Draft era were 2006 West Coast premiership teammates, Ben Cousins (East Fremantle) and Chris Judd (Sandringham).

These clubs are seeded first (East Fremantle) and eighth (Sandringham) respectively, forming an intriguing final eight clash in our draw. Our proposed Sharks squad outvoted the Calder Cannons after a first-round bye, while Sandringham’s path to this stage came through East Perth and Glenelg. The winner will qualify for the semi finals, set to face the Northern Knights/Murray Bushrangers.

Where do we even begin with this East Fremantle side? The most obvious strength is its midfield, with a terrific balance among the centre bounce trio of Patrick Cripps, Simon Black, and Cousins. Cripps provides the inside grunt, while Black is the silk, and Cousins the hard-running accumulator. All three are terrific leaders too, but boy do they have support in spades. The trio of Paul Hasleby (wing), Elliot Yeo (half-back), and Andrew Swallow (half-forward), who have all been squeezed out, could well make up the midfield of a second Sharks All-Star side. That is not to mention those on the bench, with Brownlow medalist Shane Woewodin joined by Daniel Kerr as the rotational x-factor, while Dom Cassisi adds to the strong leadership core alongside Fremantle icon Shaun McManus. Perhaps most ominously of all, they will follow under the ruckwork of 211cm giant, Aaron Sandilands.

But if there is any side that can go pound-for-pound with any other midfield stock, it is Sandringham. The Dragons will fancy their chances of matching the Sharks for inside grunt, with Josh P. Kennedy and Luke Ball joined in the middle by Judd, who transitioned into a contested beast later in his career, at Carlton. Add Jobe Watson to the mix, as well as Angus Brayshaw, Tim Taranto, and Jarryd Lyons off the bench. Like East Fremantle, Sandringham also boasts a few elites squeezed out of the prime positions, with Andy McGrath out at half-back and Josh Kelly at half-forward. Meanwhile, Zac Merrett takes up a wing, tasked with matching the run and flair of Chris Mainwaring.

With the question of depth a non-factor at this point, it is difficult to seperate these two midfields. In terms of experience, accolades, and runs on the board, East Fremantle seems to sneak ahead – especially given six of the 11 names listed above for Sandringham are still playing out their careers. Furthermore, the Sharks seem to have an edge in terms of balance, with the run of Cousins, Kerr, and Mainwaring in particular greater than what any Dragon can offer, while the honest ball winners remain. Sandringham’s big asset, its inside power, is arguably matched too, especially with the likes of Hasleby and Yeo destined to rotate through the engine room. Max Gawn makes for a terrific adversary against Sandilands and beats him around the ground, but not in the ruck contest, which is crucial with such class to utilise at ground level.

The respective spines also provide a key area of interest, with champions scattered throughout, but one side coming out a clear winner in our eyes. There is not much you could do to improve the Sharks’ key position set-up, with Luke McPharlin and Harry Taylor making for a formidable defensive partnership, while Josh J. Kennedy and Paddy Ryder line up down the other end. Sure, Ryder is more of a ruckman, but the swingman support of Cale Hooker slots in as well should the latter fall to the bench. The versatility of Hooker, McPharlin, and Taylor is also handy, given all three have been known to swing forward from time to time.

Sandringham answers with goals in spades among its two key position forwards, with the career tallies of Tom Hawkins and Jack Gunston outweighing that of their counterparts in Kennedy and Ryder. However, the defensive pairing is perhaps what sets the two sides apart the most. Ted Richards is a fine centre half-back option, and St Kilda stalwart Jason Blake was a terrific servant in his own right, but both come up slightly undersized against East Fremantle’s monster forwards. That is not to say the likes of Tom Langdon, Brayden Maynard, and Simon Beaumont could not provide aerial support, but in a pure man-on-man scenario, that factor gives the Sharks the edge in this department.

The competition is getting tighter by the round among our All-Star teams, and this is one of the closest calls yet. But given the two areas identified which see East Fremantle come out on top, we are inclined to stick with the Sharks. As the number one seed, they simply boast a greater amount of depth, and match up well against the key strengths of Sandringham here. 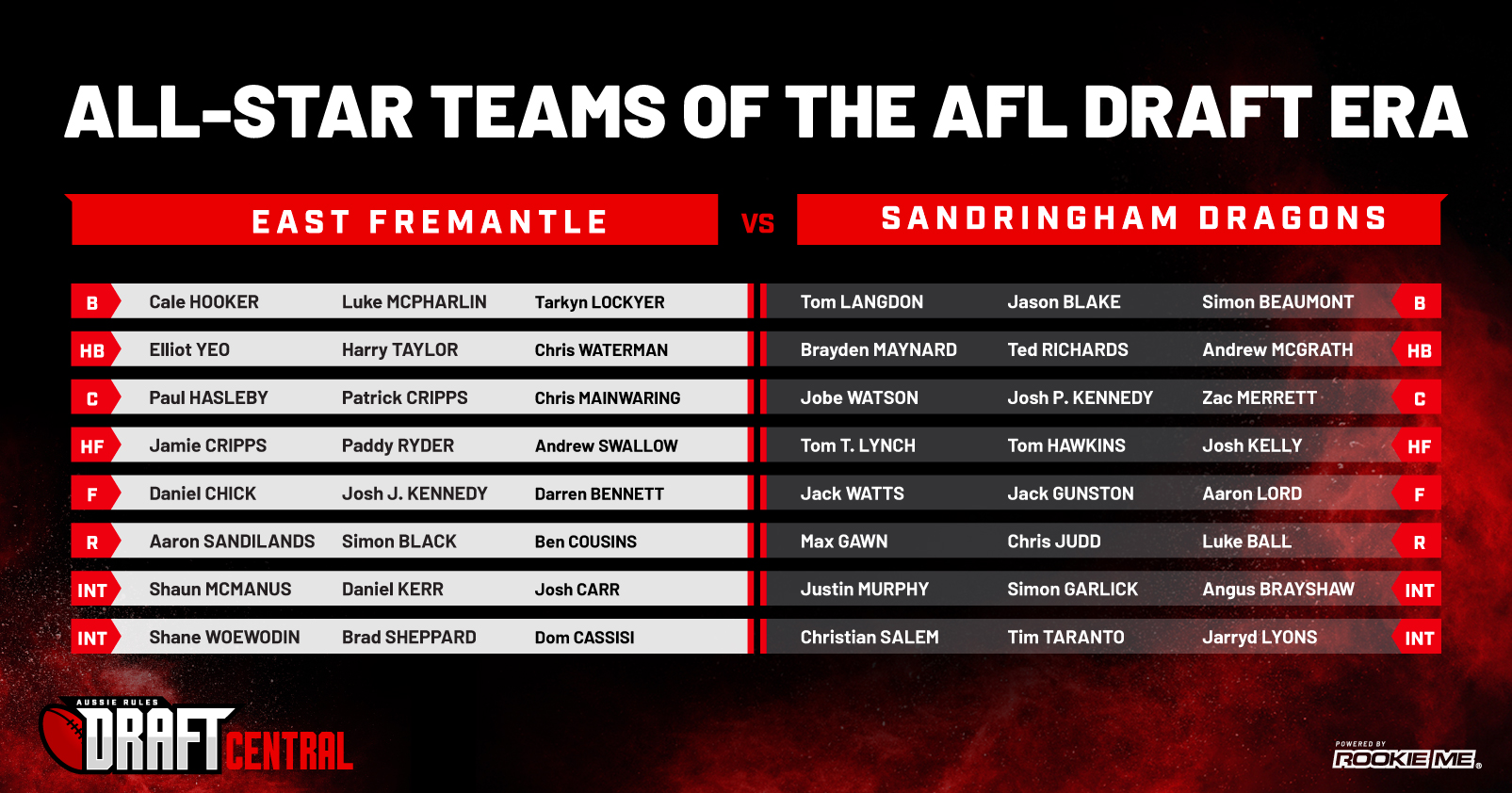 Which All-Star Team of the AFL Draft Era are you picking?
Created with QuizMaker