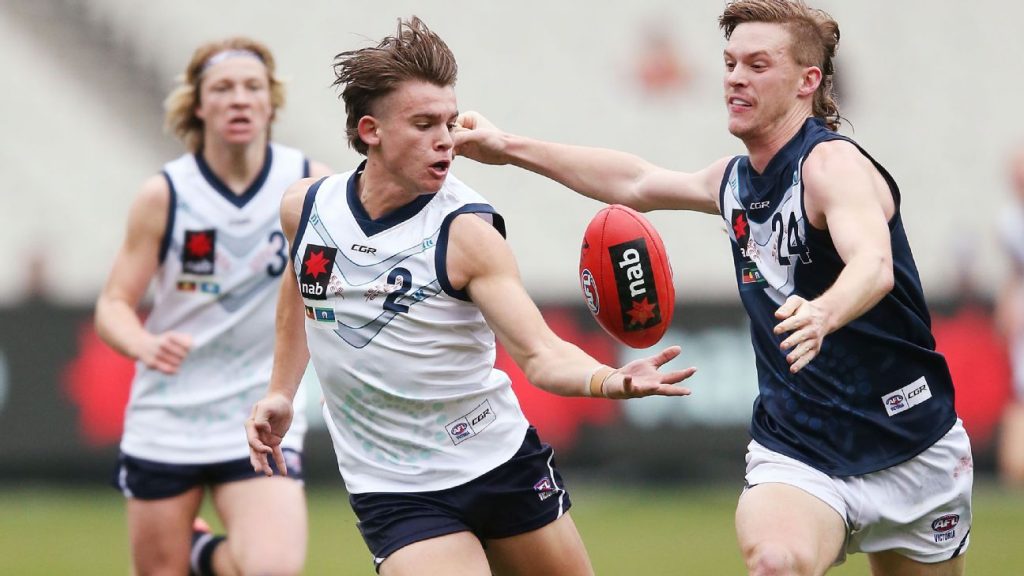 THE NUMBER of recruits from the 2019 AFL Draft to run out for their respective teams on the weekend spilled back into double digits, despite a few youngsters being squeezed out of senior selection in the ultimate home-and-away-round. There was plenty to take out of Round 18 for the class of 2019, with a bunch of up-and-comers continuing to stamp their mark on the competition. We take a look at how the best handful of them performed.

It was difficult to split Serong and Noah Anderson for this spot, but the hard-nosed Fremantle midfielder gets the edge this week. Despite a frustrating loss to the finals-bound Bulldogs, Serong went about his usual business in finding plenty of the ball at the coalface, and thrusting the Dockers forward with clean possessions. His bombing kicks forward were a little wayward at times, but quickly saw the ball put into dangerous positions, where the Fremantle forward structure was unable to capitalise. The Gippsland Power product looms as a top three Rising Star candidate, and is our pick for the award given his exceptional consistency in a growing side.

Just behind Serong, but not by much on the weekend was Anderson, last year’s number two draft pick. The Oakleigh Chargers graduate again showed his wares on the inside of midfield, racking up plenty of the ball to finish five of his last six games with over 20 disposals. Like many of those performances, Anderson’s form came amid a loss for the Suns, meaning his steepest rise did not all match his team’s lacklustre end to the year. The midfielder’s ability to gain good meterage by foot and get involved in scoring chains is invaluable, and should make for a dangerous asset alongside good mate, Matt Rowell for years to come.

Day’s Hawks ensured club stalwarts Ben Stratton and Paul Puopolo would end their AFL careers on a good note, thumping Anderson’s Suns in a positive finish to what was a disappointing season overall. The South Australian defender won 84 per cent of his disposals in the defensive half, providing a safe outlet and moving the ball along in a largely uncontested manner. He was able to get into more advanced positions too, with kicking efficiency and marking prowess the key strengths he will bring to the fore for Hawthorn in future – potentially up on a wing.

In what was another terrible performance from the GIANTS as a whole, Riccardi looked like one of the only players likely to threaten St Kilda’s defence. The first year, mature-age forward got busy with five marks leading up from his key position post, while also booting one of his side’s three goals, and also getting involved in a further four scores. The Werribee and Calder Cannons product boasts some serious potential, and could prove vital to GWS moving forward with Jeremy Cameron‘s contract status still up in the air, and others in his position struggling for form.

Rivers capped off a promising debut campaign well, playing his part in Melbourne’s disaster-aversion against Essendon, which saw the Demons still narrowly miss out on finals. The West Australian produced some of his most efficient numbers for the year, running at 86 per cent, providing a whole lot with ball in hand. He was even seen roaming further afield, using his dash and dare to set Melbourne on the right foot in transition. After nine games in 2020, the defender has proven plenty of doubters wrong thus far having slid to pick 32 in the National Draft, and will have plenty of bright moments to come.