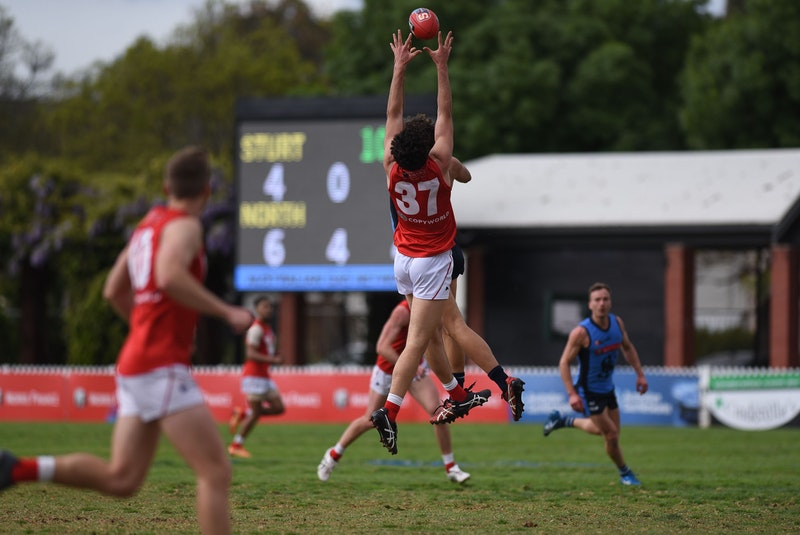 WITH young guns impressing at state league level around the nation, we again narrow our focus for this week’s South Australian National Football League (SANFL) wrap to the performances of youth throughout all three grades. There is plenty to unpack in our next altered edition, with Under 18 prospects scattered across the two senior competitions, and a bunch of youngsters impressing in the junior grade in Round 13. Some returning school football guns also made for handy inclusions, putting in eye-catching cameos.

Woodville-West Torrens (WWT) did the triple over West Adelaide on Friday and Saturday, taking home its hat-trick of wins by a combined margin of 216 points. At League level, the Eagles have all-but officially clinched the minor premiership, while Westies look destined to finish in the wooden spoon position.

The Bloods had some good young talent take the field as well, headlined by National Combine invitee Mitchell Duval, who reeled in seven marks on a tough day for the Westies defence. GWS Academy graduate, Lachlan Squire continued his run in the top flight with 19 disposals and nine rebound 50s in a slightly different role, while Sydney Academy product Hamish Ellem booted a goal up forward.

Bailey Chamberlain again narrowly missed the cut at League level, but continues to thrive in the Reserves despite his side’s shortcomings. Westies went down to another strong Eagles side in the second grade, but had Chamberlain and Jye Sinderberry named among the best players. Fellow Under 18s prospect Nicholas Couroupis has also proven an asset in the side across the last few weeks alongside Cooper Gilbert, while Hugo Kelly returned to the fold, and another Swans Academy product in Kyle Martin continued his streak in the Reserves. Taj Schofield and Harrison Dawkins were present for the Eagles in their big win having recently earned promotion, joining goalkicker and first round bolter Caleb Poulter at the level.

WWT booted 13 goals to West Adelaide’s one after quarter time to seal a massive Under 18s win on Saturday, despite both sides missing some key personnel – listed above. Another Port Adelaide-aligned prospect, Jase Burgoyne again topped the disposal charts for the Eagles with 35, leading from fellow bottom-agers Brayden Clavett (27) and Cormack O’Reilly (25), who also kicked a goal each. Jay Watson could have had a massive day out having managed 2.4 from 21 touches, while Zac Phillips (20 disposals, nine marks, 22 hitouts) was prominent aerially.

Eduard van den Berg was again kept busy down back for West Adelaide, racking up a team-high 31 disposals and nine rebound 50s. Cade Kennedy (30 disposals, seven tackles) and Ben Burbridge (23 disposals) were the main forms of resistance from midfield, while Luke Young again worked hard up the field from his forward post, but couldn’t find the goals.

South Adelaide crushed Norwood’s League finals dream on Saturday, running out 74-point victors to consolidate its own top four position. The Panthers were terrific across the board against a wounded Redlegs outfit, but in terms of young talent, saw Jason Horne and Beau McCreery each boot a goal. Victorian recruit Daly Andrews had his quietest outing yet, but still managed 12 disposals. Another VFL pick-up, Nikolaus Rokahr was one of Norwood’s best, while 21-year-old Cole Gerloff snared a goal, Brodie Carroll kept his spot after a Round 12 return, managing nine touches alongside Under 18s gun, Daniel Fairbrother.

The Redlegs’ Reserves pipped South Adelaide at the post, claiming a four-point victory despite remaining planted to bottom spot with two wins. Jack Saunders continued his terrific run of form, this time in a slightly different aspect with two majors among a relatively young squad. National Combine invitee Phoenix Spicer again hit the scoreboard for the Panthers with one goal, while Damon Freitag matched his feat as he looks to gain an extended run.

Norwood’s defeat of South Adelaide at Under 18s level also sets up an intriguing final round of action, with the Panthers only just holding on to their top four spot. The Redlegs had plenty of strong contributors, with Finn Heard booting five goals, while Sam Duke had 21 kicks from his 23 touches, and Henry Nelligan was industrious as always with fellow AFL Academy member, Cooper Murley. School football returnees Ethan Schwerdt (23 disposals) and Xavier Tranfa (16) also showed good signs.

Speaking of, Matthew Roberts picked up where he left off, racking up a game-high 31 disposals and booting two goals for South. He was supported well by fellow bottom-ager Arlo Draper in midfield, while Brayden Cook slammed home five majors, and the defensive pair of Jack Flett and Harry Spacie was again strong.

North Adelaide secured second spot at the very least at League level on Saturday, defeating Sturt by 31 points to complete what ended up being a clean sweep of the Double Blues. The defensive duo of Karl Finlay and Dyson Hilder was reunited at League level having interchanged through the Reserves, and both had an impact in the Roosters’ win.

It was a much tighter affair in the Reserves as the Roosters crowed to the tune of 10 points, but Sturt still boasted a couple of strong young performers. Tom Emmett was again among the most notable, booting three goals to take his fortnightly tally to eight. The strongly-built forward has suited the level well since earning a berth last month.

Another dominant performance at Under 18s level sees North Adelaide in with a big chance of snaring a top four spot, having knocked off the ladder leaders in true style. Bottom-age Crows NGA prospect Blayne O’Loughlin again accumulated plenty of ball with 31 disposals, while Jayden Davison and James Willis both hit the scoreboard from midfield among a raft of impressive performers. Unsurprisingly, Sturt’s Tom Powell led all comers with 35 disposals, while the likes of Bradley Jefferies, Malachy Carruthers, and Morgan Ferres (four goals) all made an impact upon their returns to the competition.

Reigning League premier, Glenelg secured its spot in finals, but not before being pushed all the way by a gallant Central District outfit on Saturday evening. Callum Park (27 disposals, 11 rebound 50s, one goal), Luke Parks (18 disposals, eight marks), and Jonty Scharenberg were among the defence which helped stave off Centrals in the dying stages. Dandenong Stingrays graduate Jack Toner also played arguably his best game yet for the Bulldogs, notching 27 disposals and laying seven tackles in the defeat.

Plenty of talented prospects also impressed in the Reserves grade, particularly for the Bays despite a 29-point loss. Ty Murphy was in everything early, finishing with three goals alongside Victorian Mitch Martin, while Kye Dean also found the big sticks upon his return to the twos. Hagan Wright was named among the Tigers’ best, while potential Adelaide father-son Luke Edwards played alongside his brother, Jackson, and Under 18s Cooper Horsnell and Connor Drum added to the young talent afield. Fresh off a five-goal haul, Lachlan Grubb managed to find the goals again with one major, while mature-age prospect Nicholas Lange booted four.

Centrals also picked up a win in the Under 18s, their fourth for the year, to close the gap to Glenelg among the bottom four. 16-year-old Austin McDonald was back to his prolific best with a game-high 34 disposals, while bigman Wyatt Ryan (31 disposals, 10 marks, 28 hitouts) had another monster game, Finn Read snared three goals from midfield, and Brodie Lake (21 disposals, eight clearances, one goal) fit right back in after a run in the Reserves.

School football standout and National Combine invitee Xavier Robins showed his wares with 30 disposals and 10 rebound 50s for the Bays, while Riley Holder and Harry Tunkin combined for an evenly-shared 46 disposals and four goals. Harry McInnes was another Tiger, among others, to show promise with three majors.