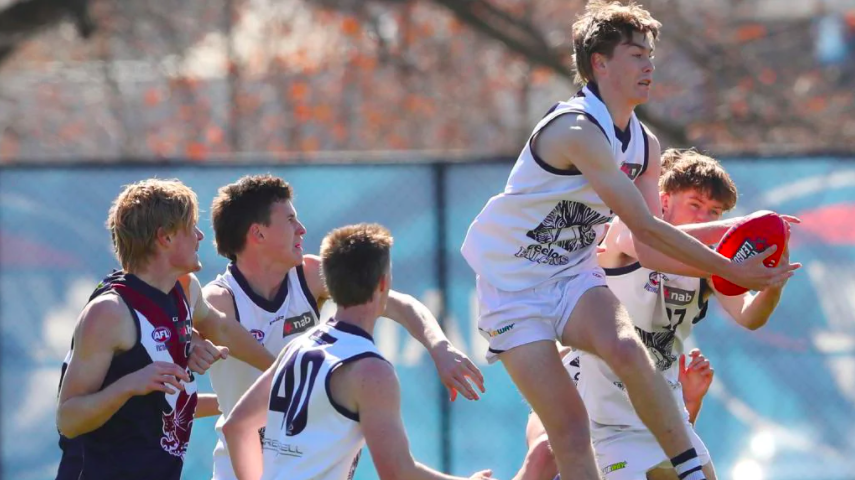 Next under the microscope in our AFL Draft watch is Geelong Falcons prospect Cameron Fleeton, a fast-rising defender who put his name in lights towards the back-end of last year’s NAB League season. Across his nine outings for the largely inexperienced Falcons side, Fleeton quickly proved his worth at the level with outstanding showings of intercept marking, leadership, and composure among an under-siege defence. The 18-year-old was so impressive, that his form warranted selection as one of Geelong’s 2020 co-captains, while also earning him an invite to this year’s National Combine. Having been forced to play a lockdown role in 2019, Fleeton was looking forward to being let off the leash as a top-ager, allowing more attacking traits to come to the fore.

Was quite possibly Geelong’s best player given the heat he took on in a key defensive post. Fleeton was as sure as anyone by foot, switching confidently across defensive 50 to try and set the Falcons on the right foot coming out of defence. Two of his three marks were fantastic too, intercepting strongly in the first term and sticking a one-hander going back in the second to show some courage and athleticism. The bottom-ager was also incredibly composed on the ball, not afraid to take on opponents on the last line and burning one in the second quarter with a good piece of agility after gathering over the back. Also contributed some second efforts with the result beyond doubt, showing heart on a rough day.

NAB League Round 16 vs. Tasmania Devils

Another exciting Falcons bottom-ager, Fleeton played a massive role in what was arguably the contest of the day against Devils forward Jackson Callow. Despite conceding some size, Fleeton trimmed the difference with his leap and combativeness, following Callow’s every step and managing to get a hand in at the opportune moment. He improved his positioning as the game went on after getting caught behind and too far under the ball on separate occasions early, while making his opponent work the other way with some run on the rebound. Can sharpen up his use by foot at times, but has played every game since his Round 8 debut and is coming on in leaps and bounds.

NAB League Round 14 vs. GWV Rebels

Fleeton is another bottom-ager the Falcons staff are high on, and he continues to put his hand up in an intercepting role across half-back. His early work included a few repelling kicks as GWV made a quick start, before eventually getting his aerial game going. Fleeton positioned well on the wing to intercept a long Rebels ball forward in the second term, repeating the act with a terrific pack mark to show his clean hands and reading of the ball in flight. Looks to have been a good find in the middle-part of the year.