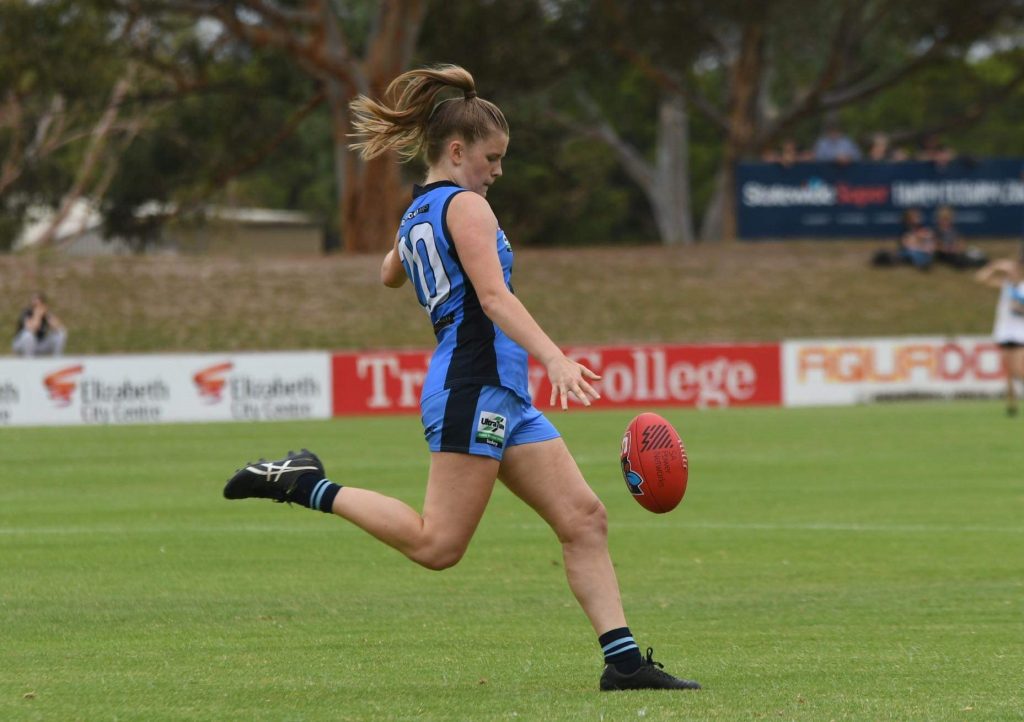 NAMED as a member of Sturt’s leadership group at just 17 years old, Hannah Prenzler is not overawed by expectations. A cool, calm and collected speaker, the soon-to-be 18-year-old is symbolic of the Double Blues side – young, talented and having a bright future. When head coach Bruce Dawes told Prenzler of her inclusion into the 2020 leadership group, she was “quite surprised”.

“To be so young but to be honest really, really honoured that everyone, or some people in the team voted me in is pretty special,” Prenzler said. “I love to be a leader when I can and help people out. “I think we have a whole team of leaders so everyone gets up in their own different way which is really great. “

“It’s been really awesome being a part of the leadership group and we’ve had a really good group with the balance of experience, not as experienced, younger, older girls so I’ve had a lot of fun this year.”

Playing all the popular sports, Prenzler focused on basketball primarily, but grew up testing herself with Auskick and then netball given there was no established Australian rules football pathway yet. But then it all changed a few years ago.

“Probably three or four years ago when I was in Year 9 I started girls footy at school and a couple of years ago started at Mitcham Hawks which is my local club,” Prenzler said. “Firstly I started in the Under 17s program for Sturt when I was about 14 and then from there continued in the Under 17s program and after my first year when I was 15, got asked to go out to the League Sturt girls and have been there ever since.”

With the South Australian National Football League (SANFL) Women’s competition establishing itself in 2017, and Sturt coming into the league in 2018, Prenzler was among the first players to run out for the Double Blues. Coming up from the Under 17s – at that stage she was just 15 – and she had no expectations on her football career.

“I think it was really good for our inaugural year there was probably about 10-15 of us that had been asked from the Under 17s program,” Prenzler said. “We thought we were just training for the League but then we started playing games. “But I think it’s been good because we’ve all grown together and since we were that younger age we have had opportunities of Under 17s coaching, state coaching which some of the over-age girls didn’t have so I think it was really good for us to have a young team that provided versatility and we were all very excited to learn.”

Prenzler said being able to establish herself in the Sturt side and remain there over the past few years alongside some close friends had been unbelievable.

“I think it’s been great,” she said. “First when I got asked to train with the League in our inaugural year and I thought it was a pretty cool opportunity to train. “Then when our coach said I was playing the first round I was quite shocked but it was awesome and to be lucky enough to play for most the games I think it’s been really good for a good bunch of us to stay together for most of the time and really try and gel and bond as a team.

“Obviously it’s been a bit tough for us with not getting too many wins but I still think it’s important we have a great club culture and everything like that so it’s been really good like that to keep growing and developing which has been good.”

Her debut for Sturt, and running out for South Australia against Northern Territory last year to determine the Central Allies squad were among her top achievements. Being included in the State Academy from the Under 16s through to the Under 18s has also been an unforgettable experience.

“That’s been awesome I reckon some of the best footy experiences that I’ve had personally starting off in the Under 16s,” Prenzler said. “That was really good to be with a whole group of girls, similar age groups who were very talented from different clubs around the SANFL which was really good.”

“Then moving up to the Under 18s again was I found another step up in professionalism,” she said. “It was really cool to have different trainers. coaches, physios. “Different things like that really made it awesome, and playing against different states and having really high level training sessions and getting a bit more coached and talking about the game which was really, really cool.”

The postponed season put her top-age year on ice, but did not stop Prenzler making the most of her time off, working with a specialist trainer to try and improve multiple aspect in her game.

“Obviously it was pretty weird not knowing when we’d be back and everything but I guess having that time off, I really set a goal to get fitter, stronger. “Make my footy skills better,” Prenzler said. “I actually started up with a new gym, Arruda Gym with a trainer called Warwick Raymond and he’s been really, really good. “I’ve done different sessions there each week with body work and footy craft, strengths and weights sessions and also running and fitness as well which I’ve really enjoyed.”

Speaking of onfield traits, Prenzler is known for her accurate kicking, with her ability to hit targets consistently and is able to read the game and make the right decisions coming off half-back. Most importantly, the young leader is always determined to improve.

“I always make sure I’m listening and absorbing as much as I can so when I go out on the field I can really make the best opportunities for myself and my team,” she said.

“I think a big thing for me is I’ve always been so excited to come to footy that I’ve always practiced on my skills and practice on my kicking. “So now to take my game to the next level I really want to work on my fitness and speed to just be that next level, that can run out a full game and not just run it out, but be an obvious standout of being fitter and really covering a lot of ground. “That takes pressure off all my kicks if I’m under fatigue and stuff like that.”

Having spent most of her life running around of the basketball court, the self-proclaimed competitor also loves the aggressive nature of Australian rules football. While the aerobic running capacity between the sports has helped her remain fit, she said there are other cross-over traits, as well as differences.

“I think that hand-eye coordination and a ball sport (are comparable), but I was always someone who liked to get aggressive and competitive so I think being able to tackle and really get in there, I really loved that aspect of it,” Prenzler said.

Prenzler has always been close with her family, watching her sister Taylor have a similar path playing basketball then joining Hannah at Sturt. Unfortunately, the older Prenzler – who turned 20 this week – injured her anterior cruciate ligament (ACL) a couple of years ago and it was tough for the close siblings.”

“A few years ago, she (Taylor) decided to come out and give it a go which has been awesome,” Prenzler said. “Two years ago now she did her ACL so that put her out for a year which was tough. “I found it pretty tough not being able to see her do the things she loved but she’s come back and she’s had a really good year this year so that was exciting. “I love playing with her.”

Furthermore on her family values, Prenzler said both her parents have been among her greatest inspirations for their encouragement and support through her sporting journey.

“Well I definitely a lot of people that would be (inspirations), but both my parents, my mum and dad,” she said. “Dad more so in the way that he’s always encouraged me for footy, I have a younger brother as well – getting me across to footy but then yeah both of them, mum for always taking me places and encouraging me. “Sometimes they get so invested and love it which really shows me that they care so I think both my parents have been great role models throughout my journey.”

As for her future in the sport, Prenzler said she would love to play at the elite level, but understood the difficulties with the interrupted year. Undeterred, the Sturt leader said she wanted to continue to improve and become the best possible player she can be.

“Obviously this year has been a bit of a crazy one with a lot of unknowns and a lot of things being cancelled but I do have a goal and a drive to one day hopefully become drafted,” Prenzler said. “I know that this year is my draft year however a lot of things have happened like I know we’ve missed out on our nationals tournament up on the Gold Coast to perform on a national stage.

“But what’s really good is that there’s a range of different girls that get drafted you know, 19, 20, 21 so yeah the dream isn’t over for just this year if I do or don’t get in or get out. “Hopefully i do get drafted one day, but just to keep improving and becoming the best I can be.”