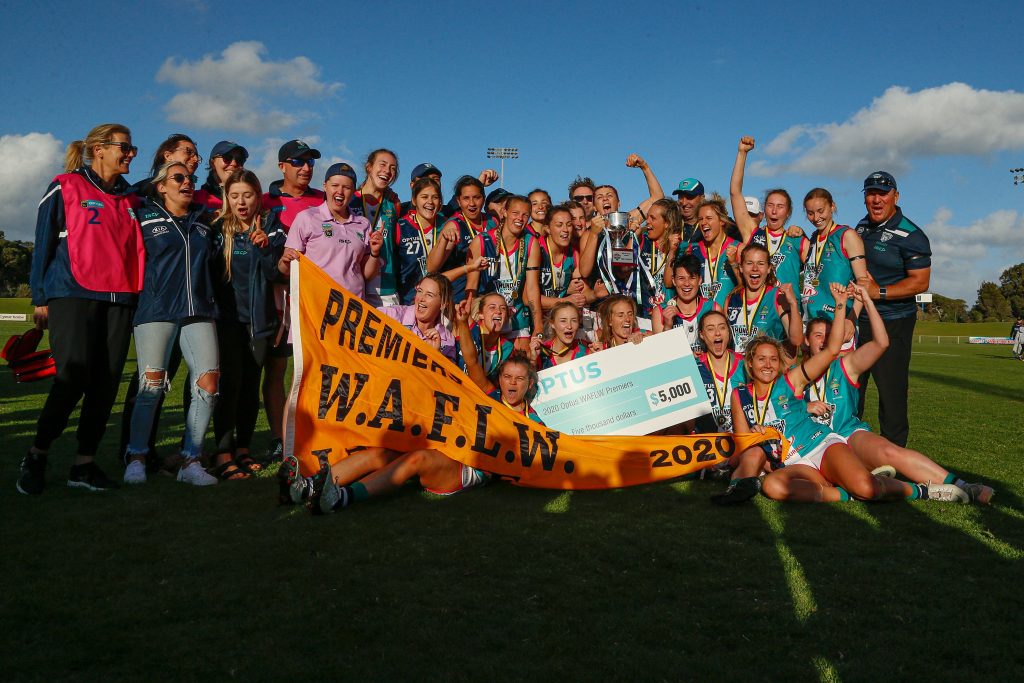 IT was a modern day football fairytale, with the 2019 West Australian Football League (WAFL) Women’s wooden spooners Peel Thunder turning their fortunes around in 12 months and claiming a remarkable title in 2020 over minor premiers, Subiaco. The Thunder reversed two previous results against the Lions this season, losing by nine and then six points – the latter of which happened a fortnight ago in the second semi-final – to post a memorable 15-point win.

In what was a fantastic performance by the second placed Thunder, Peel weathered the early Subiaco storm aided by a strong breeze, to boot three second quarter goals, and only concede on goal in the last 75 minutes of the match. Chloe Wrigley won the Lou Knitter Medal for best on ground for her work through the middle, but it easily could have gone to any number of players such was the even team performance across the board from the Thunder.

From 15-year-old Ella Roberts‘ strong overhead marking and kicking two majors in the second term, to the defensive efforts of Tanisha Anderson, Ebony Dowson and Cassie Davidson in the back half, and the strength and nous of Kira Phillips inside 50, everything clicked for the Thunder on the big stage. Subiaco was not without its chances, and after a second goal early in the third term gave them hope, the Lions could not maximise their time with the breeze, and ultimately ran out of time as Peel’s defensive work in the second half restricted their ability to score.

It looked good early for the minor premiers who had defeated Peel just two weeks earlier, doing all the attacking. Five minutes into the contest, it was Maggie Maclachlan – who received a Draft Combine invitation a couple of weeks ago – who got her team going with a quick kick that was a wobbly floater but effective, reading the ball off hands and putting it through. Subiaco was relentless in its attack going forward, but Dowson and Anderson were holding up well.

Kia Buckley was having some sort of first term for the maroon and gold, but kept finding the ball a touch too far out, and Wrigley was beginning to work into the match. Ebony Bilcich‘s long boot off the wing pickpocketing her opponent hit up Kate Bartlett just outside 50 and Peel had its first inside 50, 16 and a half minutes into the term. Unfortunately Bailey Molloy got a cruel bounce and Subiaco cleared, but it was only for a short time as Roberts won the ball on the wing, got it to Bartlett who spotted Phillips leading out.

Her long shot from 45m was impressive given she was kicking into the wind, but sprayed it to the right. Nonetheless, Peel was gaining some crucial forward minutes against the breeze late in the quarter. Soon they would get on the board through Phillips, who wrestled a number of opponents, managed to craft it to her boot at the top of the goalsquare and bounced it home with the final kick of the quarter. Despite having to concede forward half possession for the majority of the contest, the Thunder headed into the first break with a one-point advantage.

Now kicking with the breeze, the Thunder took full advantage of the wind, booting three majors to give themselves some breathing space on the scoreboard. It was no surprise to see Roberts heavily involved with an inside 50 from Hannah Church. Her shot from 40m hardly looked like missing and Peel extended the lead in the opening minute of the contest. Subiaco had a number of forward thrusts themselves as Aimee Schmidt and Tayla Thorogood were involved, while Lions captain Hayley Miller tried to create something special.

Demi Liddle joined the likes of Anderson, Dowson and Davidson in holding firm in defence, and the Thunder used their trademark ball movement to turn defence into attack in transition. Midway through the term, it was some smart thinking from Phillips kicking with the outside of the boot close to the boundary line to spot Molloy loose and running towards goal. Her teammate marked 20m out and then made no mistake, with the lead out to 13 points.

Subiaco was showing signs of frustration with Abbey Dowrick giving away a downfield free kick for a late push, and a number of high tackles. It would be the work of Liddle again, this time further up the ground to hit up Roberts with an unbelievable mark overhead, so clean and reading it incredibly well to set up another set shot. Being 40m out, it was like she was point-blank as she coasted another one home and all of a sudden the lead was out to 19 points and the danger signs were there for Subiaco.

Able to gain some minutes inside 50 in the later stages of the term, Maclachlan had a chance to kick one against the flow, but her dribble kick went to the left and through for a behind – the first score since her goal early in the opening term. The last play of the term was a contested grab from Phillips but her long-range torpedo from 50m fell short and Subiaco was able to lock it up. Heading into half-time, the Lions trailed by 18 points.

The second half would only yield one goal, but it did not stop the contest from being tight and tense throughout. Ellie Blackmore had been solid throughout the contest and tried her best through the midfield, and soon it was Maclachlan again who poped up just three minutes into the term. Leading Shannon Whale to the ball, she won a free kick for being held and then converted the goal to draw within 12 points.

Tiah Haynes had presented Maclachlan with a perfect kick inside 50, and both Haynes and Blackmore were trying to get the ball moving inside 50. Whale, Anderson and Dowson had other ideas with their fierce tackling really stemming any flow Subiaco could create. Greta McKinley was getting in on the action with some drives out of defence. Roberts was even getting back to help out, and moving through midfield taking some crucial contested marks.

Charlie Thomas had a quick kick towards goal midway through the term but could not get penetration on the kick, and every time Subiaco charged forward, the Thunder had the answers. Anderson was best-on in the third term with great position, playing in front, strong marking and kicking out from half-back really owning her defensive line. It helped Peel attack fiercely and whilst they did not manage to put a goal on the board, the likes of Bartlett and Roberts both had chances, but missed. Peel had done enough to lead by 14 points at the final break.

The final term was much of the same as the third quarter as Peel had the breeze and was still attacking to make sure they did not park the bus and allow the Lions to make all the moves. Dowson got involved with a great kick to Roberts who took another contested mark and then a huge front-on tackle from Whale forced a turnover on the wing and the Thunder went forward and locked it up. That was what the final term was all about, just keeping the ball inside forward 50.

They did that for the full 20 minutes as each time Subiaco went to attack, the Peel defence stood up. Dowson, Whale and McKinley were particularly impressive in the final term, with Roberts and Phillips again great forward of centre. Wrigley, deserving of the best on ground medal won it through the middle and Peel was able to play a perfect final term. With a few minutes left, Liddle took a strong intercept mark deep in defence and it was the final straw that broke the camel’s back. The siren sounded a few minutes later and the Thunder were victorious.

For all of Subiaco’s hard work, the consistency of Ange Stannett, Schmidt, Blackmore and Maclachlan, it would not be enough as the full team contribution from the Thunder had got them home. The fairytale was complete. Peel Thunder were the 2020 WAFL Women’s premiers.