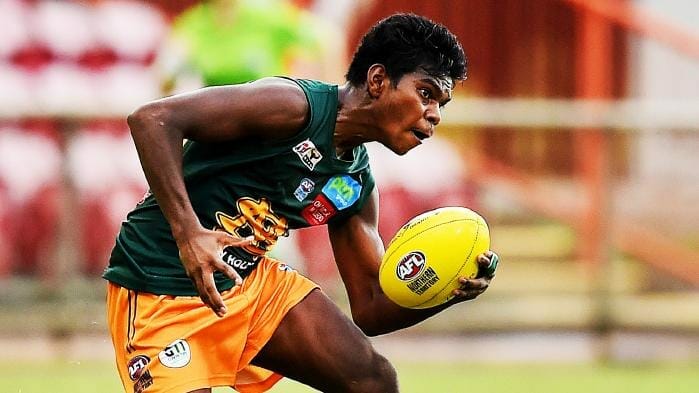 Next under the microscope in our AFL Draft watch is Oakleigh Chargers and NT Thunder prospect, Maurice Rioli Jnr. He is the son of late Richmond great, Maurice Rioli, and is eligible to be taken by the Tigers in this year’s draft under the father-son rule. As his pedigree would suggest, the 18-year-old is an excitement machine out on the field, boasting electric pace, sharp skills, and an uncanny knack of finding the goals. While he stands at just 173cm, Rioli is not afraid to get stuck in, boasting a high contested possession rate and applying smothering defensive pressure as he rotates forward through the midfield.

Having moved down to Victoria this year to complete his studies at Scotch College, Rioli was also keen to run out for Oakleigh in the now-scrapped NAB League competition. Nonetheless, he remains one of the sole prospects based in the Southern state to have completed a season of football in 2020, after he helped St Mary’s qualify for this year’s NTFL Grand Final in a memorable post-season.

The way this bottom-ager plays, it is no surprise he is a Rioli. His presence of silky skill was complimented beautifully by his dashing speed. Although he did not have huge numbers, his possessions were damaging thanks to his precise vision and ability to lower his eyes. A run-down tackle at the start of the third quarter got the crowd up on its feet.

2018 Under 16 National Championships vs. Tasmania

The latest of the Rioli clan, Maurice has all of the traits you would expect given his pedigree. While he did not find a heap of the ball in the forward half, he looked dangerous in possession and started the game off perfectly with a snap after slipping his opponent. While he is still very raw, Rioli has plenty of talent to work with and is not afraid to pull off a party trick at full pace. At 173cm, he is not quite yet ready for a spot in the midfield, but was given a run at a centre bounce in the third quarter.