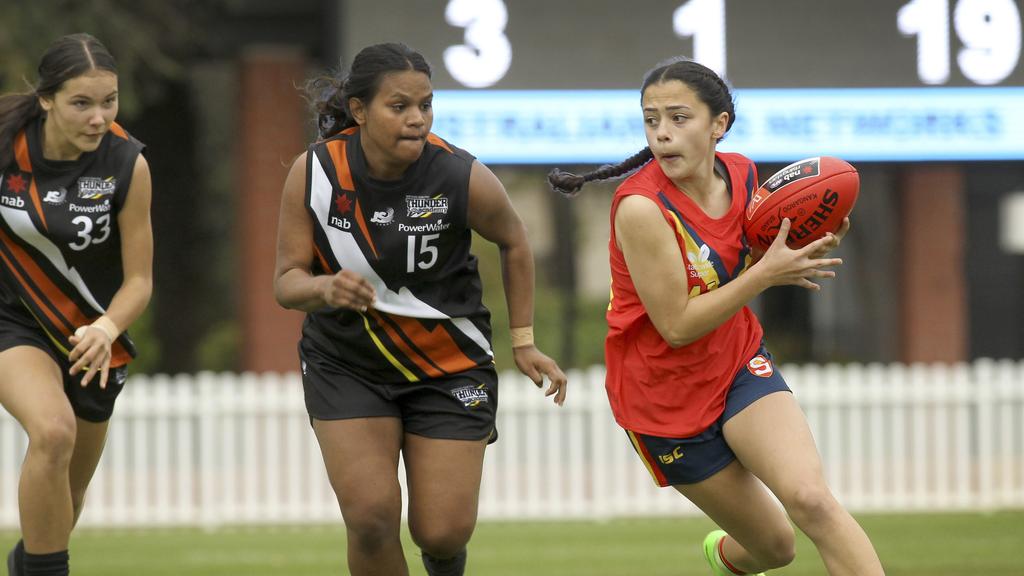 SHE may be small, but packs a punch. Central District forward Laitiah Huynh is a prospect who personifies everything great about her side’s style; pace, an attacking mindset, and ferocity in the tackle.

The 17-year-old has cut her teeth throughout the South Australian pathway, rising the ranks via her state’s Under 16s, and Under 18s squads over the past three years. She has proven a perfect fit for Bulldogs’ senior side since debuting in 2019, harnessing her competitive edge with help from her Centrals family.

“I used to be really hesitant for the ball but with Centrals, they just go for everything so I’m in everything now – or I try to be,” Huynh said. “It made me a more fierce player. “(My coaches and teammates) always help me. Most of them are like my family now, I love them all… at the start it was really nerve-racking because I was the youngest one in the whole team, but they supported me and helped me through it.”

In such a tumultuous year for budding AFL Women’s draftees, the theme of family has helped Huynh come out the other side a better for it. With her release, football, taken away from her amid a global pandemic, the youngster sought to connect the best support network possible.

“I just surrounded myself with my family and friends, mainly my family because I couldn’t really see anyone else,” she said. “But it was hard because I didn’t really have anything to do and footy is usually what I did to get my mind off other things.

“I thought it was going to impact my performance when we came back. I wasn’t sure how well I’d perform because we didn’t really get to train as a team. “My dad’s crazy about my football so he’s just the biggest support ever. (Mum and Dad) come to all my games, they took me everywhere before I had my licence so it’s been really good.”

The lingering unknown was compounded by Huynh’s juggling act of high-level football, Year 12 schooling, casual work, and interests outside all those realms, forcing somewhat of a squeeze on her priorities. But not for long, as she hit the ground running and prospered upon a return to normality.

“I did miss a few trainings because of school, because I was just trying to keep on top of everything,” she said. “But it’s gone better now, I’ve almost finished. “The season came back (during) the important part of school, so I was just a bit stressed out but I just cut my casual work a bit and just did school and footy. “I bought heaps of things off Gumtree and just trained at home. “We had a group chat so we all sent in different activities (and) exercises to do at home, rather than a gym.”

The improvisation paid off, as Huynh impressed throughout her second South Australian National Football League (SANFL) Women’s campaign, while also recently running out in her state’s Under 18 All-Star showcase. Having already proven her worth as a forward, the speedy small was utilised further afield late in the season, and during her representative hitout.

“I’m a bit smaller so I’ve mostly stuck to the forwardline this season,” she said. “I was also chucked on the wing for a couple of games and everyone thinks I’d be better on the wing because I’m fast. “With practice I think I’ll get better at it, I do want to learn the wing more.

“I think I did alright (in the All-Stars game). “I got put on the wing and I went forward for a little bit but the ball wasn’t really coming down when I was there. “But it was heaps fun because all the girls were obviously the best talent in SA, so we were all skilful and it was a good experience.”

The opportunity to play at such a high level against her peers somewhat made up for a lack of a national carnival in 2020, which Huynh says she wishes she could have experienced again in her top-age year. Having transitioned into football at around age 12, she has also observed the expansion of such pathways.

“It was my last year so obviously I would have wished to have a National Championships,” she said. “All in all, you can’t really help what happened but it was a good experience. “Most of my SA friends were in the All-Stars game anyway, I’d played with them for the last couple of years, so it was a good experience to be alongside them again.

“When I started I don’t think there was an AFLW team (in South Australia) but I think when everyone heard that there would be, they just jumped straight into footy and ever since then, with all the different pathways and activities that are put on for everyone to join in, they’ve really gained the skill and experience from all of that.”

As a supporter of the Adelaide’s successful women’s side, Huynh admits playing for the Crows “would be the dream” come draft time, but is happy to move anywhere given she has family all around Australia. Looking forward, Huynh is working on her contested game, especially marking, while also seeking to build her fitness and strength to suit AFLW level.

Should the ultimate dream not come to fruition this year, the fast-developing prospect is happy to hone her craft with help from the Central District family.