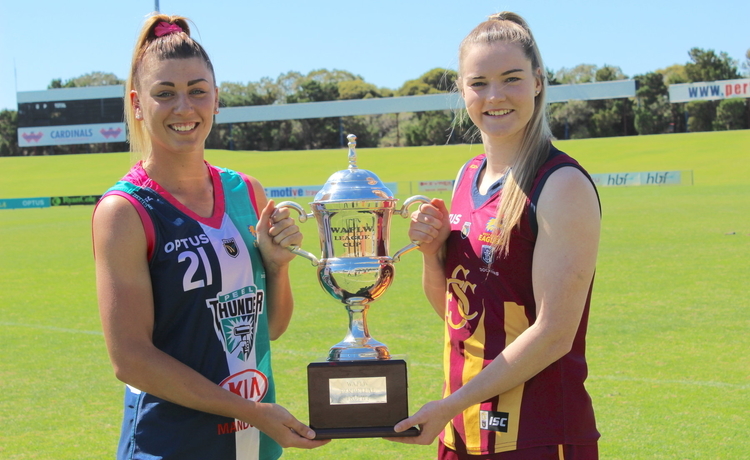 AFTER a long and tight West Australian Football League (WAFL) Women’s season, the best two teams of 2020 have made their way into the grand final. Minor premiers, Subiaco will face off against newcomers Peel Thunder in a bid to follow through on their top of the table finish after the regular season. We spoke to both coaches ahead of the big clash that begins 2.30pm tomorrow local time, or 4.30pm AEST.

Subiaco is no stranger to successful home and away seasons, finishing on top of the WAFL Women’s table last year, only to lose the first final to eventual premiers East Fremantle, and then go out in straight sets at the hands of Swan Districts a week later. This time around, in a shortened season, the Lions have only dropped one game throughout the regular season, and posted an important six-point victory over Peel in the first week of finals. In stark comparison to the Lions, the Thunder have not been in this position before, entering their first finals series in the club’s short history, after finishing on the bottom last year in the WAFL Women’s first official season.

Fast forward 12 months and with new mentor and Rogers Cup premiership coach Steve Markham at the helm, the Thunder are into the decider and excited at what they have been able to accomplish having risen from league battlers to genuine title contenders in a short space of time.

“We’re very excited with where we’ve come from and the way the girls have gone about it this year,” Markham said. “We’ve bonded this season and everything we’ve worked on has come together so we’re super excited to be involved in the last game of the year.”

Now he has to guide his side to a win over strong favourites, Subiaco who are led by West Australian champion player, Amy Lavell. Despite getting close both times this season – just nine and six-point losses – Markham knows just how tough the challenge will be, but his side will not shy away from it.

Markham said the great aspect about Peel’s list is its even balance across the board. While there were some individual standouts from game to game, the Thunder were not reliant on any one or two players. Markham noted it was more about the system and ball movement that made the team so exciting.

“We’ve played really consistent footy across the year and haven’t had any clear standouts,” he said. “Obviously there are weeks where players stand up and you’ve got your Kira Phillips, your Ella Roberts, your Courtney Rowleys but we’re driven from a team perspective coming off half-back and through the middle.”

Peel booked a spot in the decider after coming from behind against East Fremantle, and the likes of Phillips and Roberts combining for five goals in the second half to get their side over the line. Resting up on the sidelines during that preliminary final was Subiaco coach Lavell, and her chargers. It was something Lavell said was important with a number of sore players at the back-end of the season.

“Yeah it’s (week off) actually been really helpful,” she said. “We’ve had a couple of sore bodies obviously coming through the last few rounds of the season. “It’s just been an opportunity for those girls to have a rest and have a couple of really good sessions but also look after the girls and get them ready, and they’re nice and healthy and ready to go.”

Lavell is new to the coaching role this year, but said there was no doubt last year’s disappointing finals series would play a part in the players’ thinking and would burn as motivation to get the job done.

“I know some of the girls were pretty disappointed after last season,” she said. “But I think just having that time to reflect on that but also we’ve got a lot of new girls this year and a lot of new AFLW girls as well. “It’s just a different feel to the group and I just think they’re just really excited to get through that first final too, but also the opportunity to play in the grand final tomorrow.”

Subiaco will head in as favourites having accounted for their opponents by those single-digit margins, once during the season and a fortnight ago. But Lavell said given the conditions that were becoming a regular occurrence for their head-to-heads, it was vital to start strongly and take full advantage of the wind.

“I think it’s difficult to know because the last two games we’ve played them have been in horrible weather conditions and by the looks of the forecast tomorrow it’s going to much the same,” she said. “I think just getting the lead early and getting onto them early. “Obviously they’ve got a lot of young and up and coming players, a lot of whom it will be their first grand final tomorrow so if we can use our experience from previous finals and previous experience just from the girls development and they can hopefully get onto them early and get a good lead.”

In a team that has no shortage of stars, Lavell said you could always rely on the AFL Women’s talent, but there were also a number of other up and comers who had proven themselves at the level and were hard to stop on the big stage.

“We’ve obviously got our tried and trusted AFLW players in Hayley Miller and Ange Stannett,” she said. “Obviously two very good players for Fremantle who will lead the way in their respective lines on the ground but also we’ve got Tiah Haynes who has played for Freo in the first few seasons of the comp and she’s a very experienced player. “Very composed in her role. “Then at the same time we’ve got some young and up coming players in Charlie Thomas and Maggie Maclachlan who Charlie is not quite draftable yet but she’s a very exciting player to watch and I’m looking forward to seeing what she brings tomorrow. “But we’re very lucky to have a lot of depth so I could probably name almost our entire team, but there’s definitely a few girls you can look out for.”

The 2020 WAFL Women’s Grand Final is set to be a beauty. Will it be the experience of Subiaco? Or the youth of Peel Thunder? Will the Lions avenge a disappointing 2019 finals series? Or will the fairytale of the Thunder’s rise to the top have one more chapter?