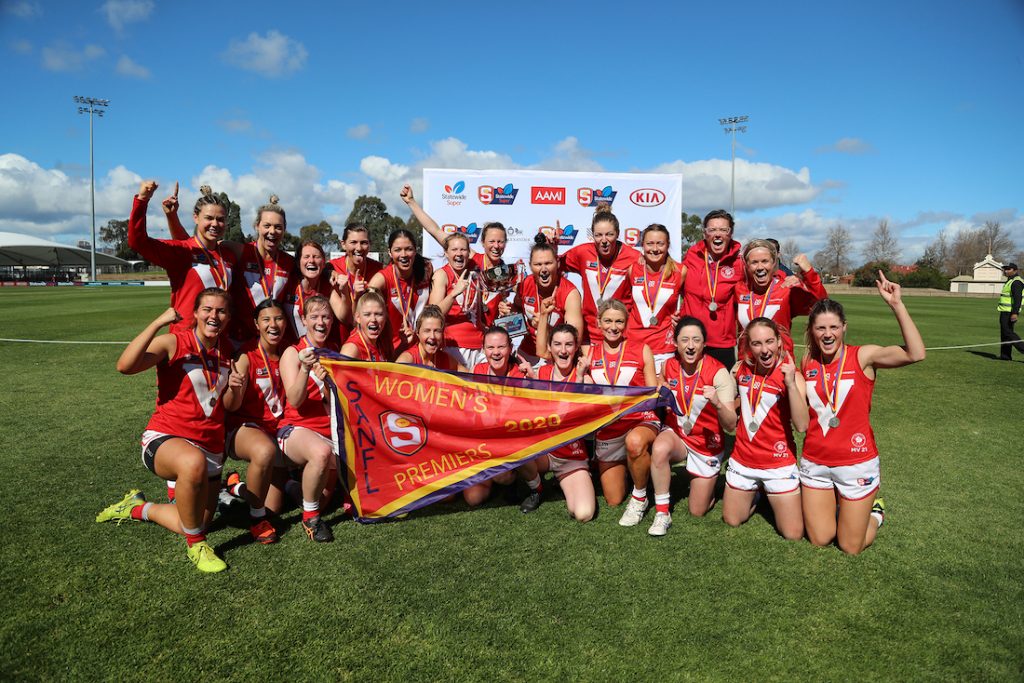 NORTH Adelaide is the next team up in our South Australian National Football League (SANFL) Women’s season review series as we look at the eight sides in reverse ladder order and how their 2020 seasons went down.

Perfect. There is no other way to realistically put it. North Adelaide had an unblemished season with a 12-0 record and earning the minor premiership, and then the real thing with back-to-back wins over incumbents South Adelaide in the qualifying final and grand final. The victory was a role reversal from the year before, and whilst Krissie Steen‘s chargers had their challenges throughout the year, the Roosters met every challenge and deserved the premiership.

An over-age defender with great hands and a booming kick, Ward showed she is well in contention to be drafted this year after receiving an AFL Women’s Draft Combine invitation. Often stationed at centre half-back, Ward was a reliable figure back there, combining well with teammate Kristi Harvey as the anchors in the defensive 50.

A sneaky forward who could push up the ground, Castle could hit the scoreboard or set up scoring opportunities for her teammates. She generally used it pretty well in the forward half of the ground and always looked damaging when the ball was in her vicinity. Providing good defensive pressure as well, Castle was a strong team player.

Joined the Roosters this season coming back from Queensland and provided good dash coming out of defence. She possesses a long kick and was able to get them out of trouble on a number of occasions, and provided an extra intercepting target in the air back there.

A versatile small who could play at either end, Clark has established herself in the Roosters best side over the past two years playing nearly every game. She played a role in defence for the grand final and is a top-ager who has developed well in the system.

Won the league’s goalkicking and showed she is a class above at state level. Is one who spent a season on Melbourne’s AFL Women’s list and was one of four players to earn an AFL Women’s Draft Combine invite. She is strong above her head, an accurate kick for goal, and able to hit targets around the ground and play through the midfield, or even in defence.

A rock on the last line, Harvey nullified opposition forwards whilst providing aerial strength to intercept and pump the ball out of the back 50. Did not mind getting into the ear of opposition forwards, and left nothing out on the ground with her attack on the ball, re-establishing herself as one of the most reliable defenders in the competition this season.

Possessing some serious wheels, Pope’s ability to take the game on and break the lines really made a point of difference for the Roosters this season. Often playing off a wing or drifting at half-forward, Pope could beat anyone in a foot race and if she got goalside, it was almost game over for any opponent. She could hit the scoreboard or set others up in a really impressive year.

Played a couple of games this year for the Roosters coming from the country area in Whyalla with a basketball background. She has versatility to play at either end and showed good development being able to crack into the Roosters side given the strength of the unit.

A developing talent with a year left until she turns 18, Rivalland will no doubt feature more often next season as a rebounding defender who can be switched forward if required. She has some good athleticism and takes the game on, reading the ball well in flight based on her All-Stars game.

Rounded out the back six nicely and added a point of difference as that smaller runner who was a reliable executor by hand or foot. She looked to shoot a dagger down the wing or open up the game, and did take the game on from time to time as well. Provided good offence while being accountable at half-back.

Another middle-age talent who earned a spot in the All-Stars squad playing forward, and has a bit of zip about her. She might not be tall, but has talent and continues to develop strongly. As someone who can come in and play a small forward’s role or further up the ground, Case will be one to watch in 2021 after an impressive grand final.

Another country-based player who plays predominantly as a defender. She is highly competitive and reliable as they come. She might not have a huge amount of SANFL Women’s experience, but she showed in the games she did play that she has a high scope to develop.

Like South Adelaide, this list could go on forever with that many contributors across the board. There is a reason the Roosters won the premiership, and whilst Anne Hatchard dominated the midfield in every game and was the clear standout winning the equal league best and fairest with best on grounds in every match, she was far from alone. Teenage talent Hannah Ewings has another two years until she is draft-eligible despite being one of the best in the competition already, whilst the experience of Lauren Daniel, and the introduction of ruck Bek Rasheed through the middle was great. Throw in AFL Women’s players Britt Perry up forward and Talia Radan down back, and the side had virtually no holes in it.

North Adelaide capped off a perfect season with a premiership, winning every game and successfully bouncing back from the 2019 defeat in the decider. They had help from some AFL Women’s talent, but it was the next core of players, and the youth coming through that held up the side and ensured that their bottom six was stronger than any other side in the competition.