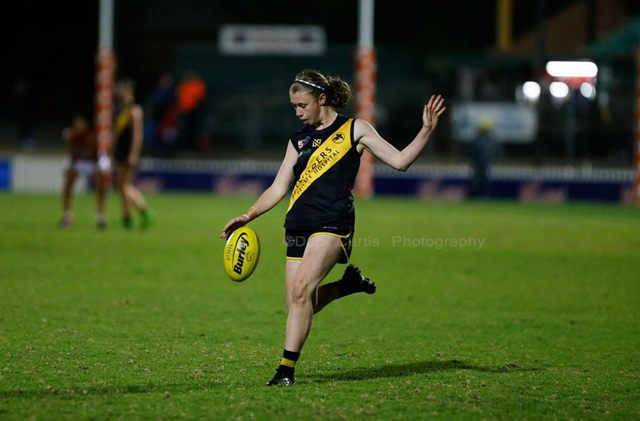 FOR 18-year-old Tamsyn Morriss, her football journey has been interrupted in patches but overall had a speedy rise through the ranks from a junior level. Starting out at Auskick and limited in her pursuit after a couple of years, Morriss did not give in and returned to Aussie rules after exploring other sports.

“I’ve grown up in like a sporting type of family, my dad played footy. As far as growing up, my mum played netball so I’ve obviously got a lot of sporting genes in there,” Morriss said. “It was obviously dad that made me start footy so I started up Auskick when I was five at my dad’s local club… did two years of Auskick and then there was no pathway for girls back then, so I went and played soccer with the boys.

“Then when I found out that I can play with the boys at footy I jumped back over to Lonsdale. “That’s where it kind of all started, playing under 10s and under 12s with the boys and then I moved over to girls footy at Kenilworth Football Club.”

Despite all the moving around early on in her football journey, Morriss found herself in the unprecedented position of being a 15-year-old on the edge of a South Australian National Football League (SANFL) Women’s berth with Glenelg.

“I then got asked to train with the Glenelg women’s team as a 15 year old, one training I got asked if I wanted to play a game, obviously, with my parents permission, being a 15 year old playing against women. “And that’s when it all started with Glenelg. “This upcoming season will be my fourth season with them.”

While Morriss has a focus on football, her past experience with other sports has certainly assisted in her skillset on the footy field, allowing her to utilise and adapt her game depending on what is required of her.

“I did a little bit of little athletics… I had to stop because obviously my footy was blowing up. And I was also involved with surf lifesaving,” she said. “So soccer, obviously it’s a team sport, kicking around a ball you kick around a ball in football as well. I reckon from little athletics I definitely got fitness, got running technique from there, and then the surf lifesaving, was extra fitness as well. I still do that… training and obviously doing patrols as well.”

While Morriss enjoyed – and still enjoys, in some cases – participating in a range of sports, the Glenelg talent says that the competitiveness and community around football is what drew her back to the sport.

With some quality talent not only heading up through the pathways but also already making waves at AFL Women’s level, Morriss says she looks to the experienced names in the SANFL system, inspired by their work ethic and skills.

“I have to say, Nikki Gore and Anne Hatchard,” Morriss said. “So I knew them, well I knew Anne before she got big humongous muscles and super super fit, that’s definitely inspired me, so that’s why I’ve been working on strength and fitness as well. “But obviously Nikki Gore, she’s just a great friend. “And she definitely pushes me along the way on and off the field.”

When it comes to strengths and improvements, Morriss suggested her fitness as a focus, with strength critical especially as the level progresses given the continued development of quality players across not just the state but also the country as women’s football continues to grow.

“At the moment, I’m working on strength and fitness. “So I can run longer, be on the ground for longer and compete better with some of the bigger girls out there. Hold my ground a bit more,” she said.

Morriss participated in the 2019 AFL Women’s Under-18 Championships up in Queensland, playing two games for the Central Allies. Still just a middle-ager last year, Morriss was looking to showcase her ability in 2020.

“That was a great experience, it was one of my favourite footy trips away. Just the connections I made with some of the girls, obviously playing with some of the girls from South Australia and then meeting new people from Northern Territory… It was an experience I’ve never done before, but definitely would have liked to do it again,” she said.

While the 2020 championships did not go ahead due to COVID-19 limitations, Morriss instead showcased her talents with a solid performance at the SANFLW All-Stars last week.