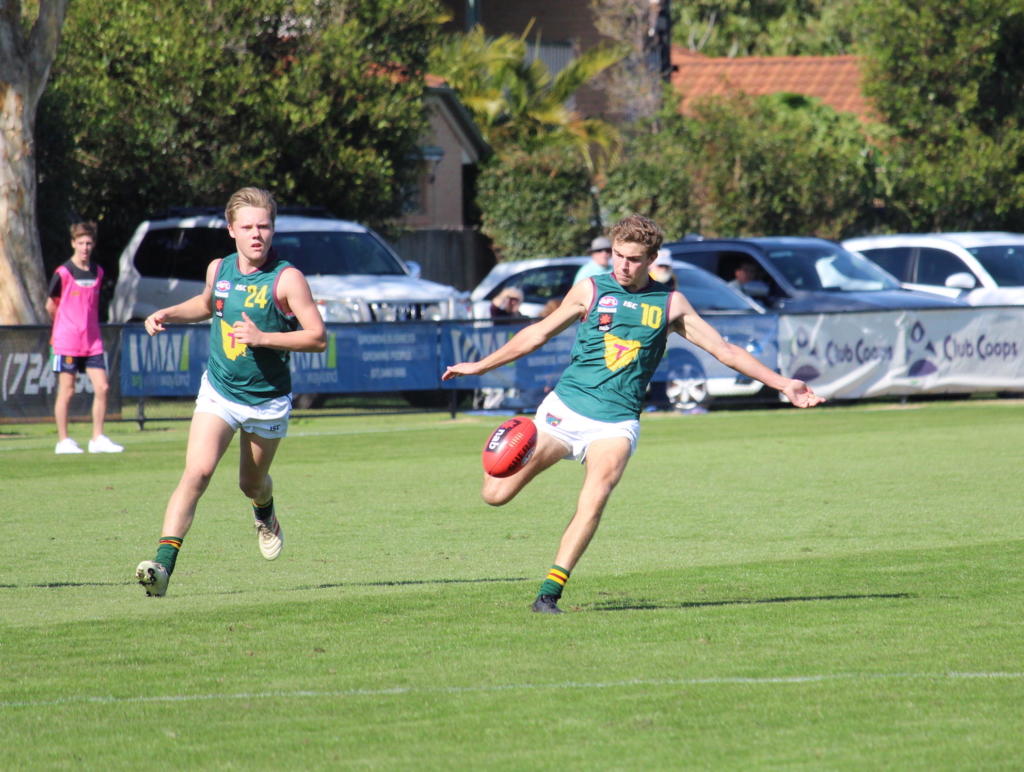 IN a come-from-behind victory, Guilford Young won its first Sports Association of Tasmanian Independent Schools (SATIS) in 18 years, defeating regular winners, St Patricks who had claimed seven of the past nine titles. In our scouting notes from the game, we look at some of the Tasmanian Devils prospects who stood out, the majority of whom are bottom-agers and will hope to have an impact in the NAB League or Tasmanian State League (TSL) next year.

One of the best on the day, Gardner just has a crack every time he is out on the field. You know what to expect from the Clarence youngster and he showed it in the win against St Patricks. Whilst at times he can blast away by foot with his determination to win the ball and get it forward – playing a more contested role – his short kicking is quite neat, and it showed with a lovely lace-out kick to Noah Holmes in the third term, even though Holmes was spoiled on that occasion. He had a chance to score himself with a quick kick, but it went too far to the right and bounce through for a behind. Despite being a smaller player, Gardner has good strength in the contest and is able to shrug off opponents, with not too dissimilar traits to Clarence teammate, Oliver Davis.

It was interesting to watch Davis around the stoppages as he rarely had too much time and space, often tackled by multiple opponents. As Guilford Young’s captain, it hardly fazed him, firing out handballs from congestion to teammates on the outside and they benefited from his work. You know what to expect from the AFL Academy member, and he did just that. On a number of occasions he was able to hit up teammates inside 50, first to Lachlan Rowlands – who missed – then Lincoln Arnold – who goaled – but his best passage of play was an elite clearance to Holmes leading out in the last 90 seconds of the game to hand his full-forward back-to-back goals in the space of a minute. Occasionally he was done for doing a bit too much, caught close to the boundary line by Michael Stingel in the second term, and then went too high with the tackle on opposing captain Bailey Gillow in the last quarter, but the subsequent shot of the latter sprayed to the right.

Davis worked hard for 16 disposals – at 93 per cent efficiency – of which 10 were contested. He also had five clearances, three inside 50s and two tackles.

Has some nice traits to his game, as well as great versatility. Seemingly the bottom-ager can play in any third of the ground, and his work off half-back and down a wing certainly provides good run for his teammates. He won his fair share of clearances when he went on-ball, and got better as the game went on, showing clean hands time and time again. McLeod was also strong in the air, taking an important intercept mark at half-back in the final term, and remained active, roaming between the arcs.

The Tasmanian Most Valuable Player (MVP) at last year’s Under 16s Championships, Banks brought his own ball to the game. While his second quarter was a little quiet, his first, third, and particularly fourth terms were very busy. When the game was on the line, he was continually involved, and his slick handballs or disposals to cut inboard and slice open the defence were handy. He uses the ball well and actually ran at 50 per cent contested rate, sharing his work in close as well as his preferred outside. He had a couple of chances at goal but could not quite register a major, and at one stage did a bit too much at half-forward and was brought down by Khai Lunson. Overall though, the positives stuck out for the major ball winner who had a day out through midfield and benefited from a high work rate across the field.

Banks amassed a game-high 34 disposals (73 per cent efficiency), 17 of which were contested, as well as six marks, six clearances and six inside 50s.

The Clarence bottom-ager was the match-winner, coming alive in the second half to slam home five goals. Always looking threatening, something clicked from the fifth minute of the third quarter. In the opening half, Holmes had been okay without being dominant, taking a couple of great marks, but missed three set shots to end the half at 0.3. Two minutes into the second half, Holmes was found trailing his defender in Sam Foley, of whom the latter marked uncontested. From that point on, the key forward would not be beaten again. He kicked his first three minutes later off the back of a strong contested grab 30m out from goal. He tried to assist in a couple of goals to Davis and Banks, but the first pass was one handball too many, and the second was a snap and miss by Banks. Instead, with two minutes left, he clunked a massive contested mark against two opponents on the goalline to go back and pop through his second, and then 30 seconds later, led out and marked off the elite clearance work of Davis. Suddenly his side was in front and he had three consecutive goals. The fourth term started like his third term had ended, with another contested grab six minutes in just 15m out, too big and strong for his opponent. His fifth game 13 minutes into the term against two opponents as he nudged one forward and leant back on the other to take it cleanly and nail the set shot from 20m out.

Holmes finished with 14 touches – nine kicks for 5.3 – as well as eight marks – six contested – in a match-winning performance and clear best on ground.

Did not see a lot of ball in the opening term because it was up the other end, but showed some good signs with a great tackle to save a charge on goal, then a long kick out of defence. That might have been turned over, but his kicking improved more in the second term, winning the ball more consistently. In the third term, Collins came across with a huge spoil at half-back to cleanly punch the ball out of bounds, backing up from an earlier tackle on the wing that forced a turnover. His intercept mark in the opening 30 seconds of the final term was also a highlight, whilst he finished strongly in the final term, using the ball well out of defence.

Collins finished with 20 disposals at 70 per cent efficiency, but nearly all were uncontested. He showed great determination with four one percenters, as well as six rebounds.

Much like Holmes up the other end, the tall defender was just too big and strong, and had enough of a leap to read the ball in flight and clunk a number of contested marks. In the opening term alone, he took three intercept marks and it was beginning to look like the opposition was pinpointing him at half-back. He lost his cool in the second term for a front-on tackle on Angus Jeffries, told the umpire that he may have been mistaken in his decision to award the free kick, and then gave away a 50m for his feedback. It was about his only blemish of the day though, as he went back to being a strong interceptor and booming kick, and even had a set shot late in the third term. It was marked on the line by Holmes who finished off the job, but Smith was solid all day in defence.

Smith ended the game with 16 disposals, six marks – four contested – four inside 50s and two rebounds with his 43 per cent disposal efficiency not indicative of his work given most of his kicks were sent long out of the danger zone.

Worked hard throughout the game and always looked lively through the middle and forward 50. A kick-first midfielder with 22 kicks and just one handball, Sanders was able to remain busy throughout the game, often out of a stoppage or in the forward half. He had a quick snap late in the second term but just missed to the right, and then a second chance in the final term but his shot just drifted away. While at times he might have rushed his disposals, he worked hard to find space and link up in St Patrick’s transition and finish with the second most touches, and most marks of anyone on his side. He also was instrumental around the clearances and would have some of the higher GPS numbers on the day.

The prominent ball winner on the day and St Patrick’s best, Jeffries put together a four-quarter performance. He won touches from the get-go and was crashing in on the inside, often shovelling handballs out of congestion or clearing it quickly by foot. Despite running at a 50 per cent contested rate, Jeffries still hit most of his targets, and laid plenty of tackles in the process. Not afraid to cop contact, he put his head over the ball in the second term, copped front-on contact from Baker Smith, received a 50m penalty and kicked a goal from point-blank range. He had a set shot from 40m in the final term after being slung to the ground, but it just missed to the left.

Jeffries finished with 24 touches – at 70 per cent efficiency – six marks, seven clearances, six tackles, two inside 50s and one goal.

Had a tough day at the office in defence, often being the third-up in front of Holmes, or trying to intercept when it came down there. Given Holmes has about 12cm and 14kg on him, the reliable defender was definitely out of his weight class. But he ended the game as one of the best for St Patrick’s, never giving in and proving to be a prominent defender. Finishing with an equal team-high five rebounds, Foley was not afraid to put himself in the hole, or try and come over and assist his teammates.

Named among the best, the medium forward was solid and lively inside 50. He was slick with ball-in-hand, finishing with a number of contested marks. Despite standing at about 186cm, Morris is able to cleanly take grabs above his head and then hit up targets inside 50. His goal in the game came five minutes into the match with some clever thinking courtesy of a quick snap at the top of the goalsquare. He worked hard throughout the day and remains one to watch for the Devils next year.