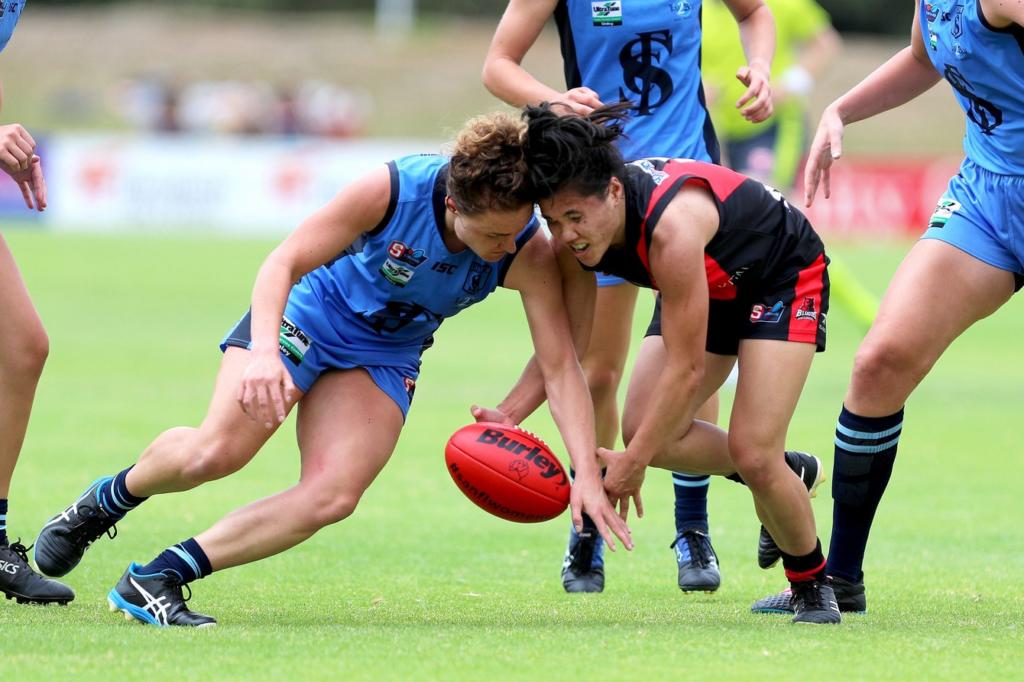 WEST ADELAIDE is the next team up in our South Australian National Football League (SANFL) Women’s season review series as we look at the eight sides in reverse ladder order and how their 2020 seasons went down.

West Adelaide enjoyed a successful season in 2020, going all the way to a Preliminary Final. The Bloods had no played in a finals series previously, but saved their best game for the elimination final when they piled on the highest score in their club’s history. They went down to South Adelaide the next week, but can be proud with how they played this year, and certainly showed huge signs of improvement and will be a serious contender in 2021.

Is a clever outside player who generally uses the ball well between midfield and attack. She is often seen running down the wing and creating things going inside 50, and uses good vision to spot up free targets and short kicks to open up space.

Strong overhead and a fierce attack on the ball, the mid-forward had a really good season in 2020, becoming one of West Adelaide’s top players despite still being a middle-age prospect. She can find her own footy easily, and as she showed in the All-Stars game, is quick on the lead and strong overhead.

Possessing a lethal left foot, Ballard loves the contested side of things and just attacks the ball and the ball carrier. She can play inside or down forward, and has such superb defensive pressure, but also capable of playing an outside role too. Despite not being tall, she is not afraid to take on players much bigger than herself in a tackle.

The league’s top player this season, Martin earned a train-on invitation with the Crows and even got a game early in the year given Adelaide’s injury list. More than capable of playing at the top level, Martin is just a natural ball winner with elite defensive pressure and a knack around goals or creating goals for other players. A deserving equal league best and fairest in 2020. Unfortunately she was unavailable for the All-Stars game but showed enough this season to show clubs what she can do.

There was no shortage of talent across the Bloods list in 2020, with defender, Madison Newman and Keeley Kustermann providing great run and balance, and elite skills coming out of the back 50. They flanked captain Lauren Rodato who was reliable as ever there, making it difficult for most opposition attacks. Looking through the midfield, Stevie-Lee Thompson and Zoe Greer were superb, while Kate Walsh had a breakout season in the ruck, and Chelsea Biddell provided a presence when in attack.

West Adelaide won a maiden final and showed how exciting the Bloods can be with some great attacking football. They had plenty of youth mixed with their AFL Women’s experience, and it made for a really strong season and something to build on for 2021.