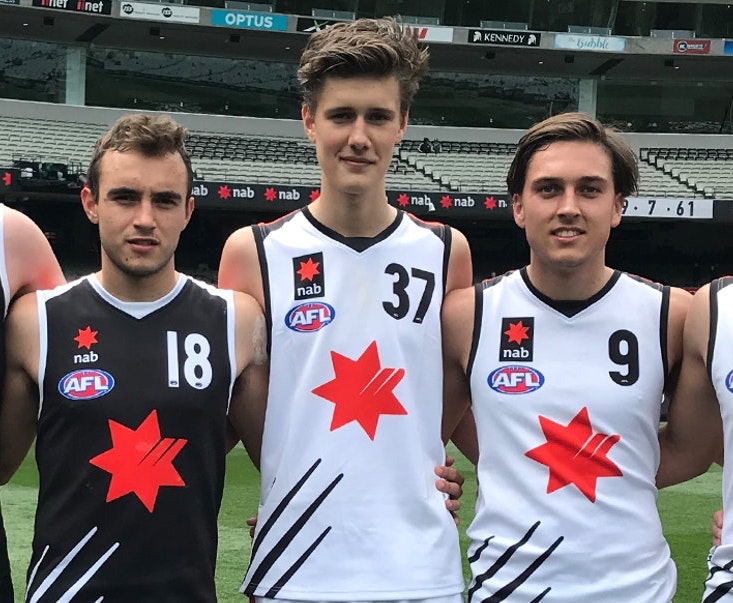 Next under the microscope in our AFL Draft watch is Woodville-West Torrens (WWT) prospect Henry Smith, a raw tall with plenty of upside. Measuring up at 202cm, Smith is not only able to impact with his aerial marking, but also provides terrific follow-up efforts at the fall of the ball. Despite missing the first three games of this year’s SANFL Under 18s season, the 18-year-old ruck/forward impressed enough across nine outings since to earn his spot on the National Combine invitee list. Should he fill out and sharpen his conversion, Smith looms as a key position option who could prove difficult to stop in full flight.

Another of Woodville-West Torrens’ 200cm prospects, Smith rotated between the forwardline and ruck to good effect. He showed some of the upside which earned him a national combine invite, following up well at stoppages while also faring well aerially as expected. Smith was another to use his height to advantage, clunking some big pack marks both around the ground and inside forward 50 against multiple opponents. Remarkably, all five of his marks were contested. While perhaps more of a lead-up forward prospect, Smith’s ruck craft was reasonably sound as he finished the game with 15 disposals, 15 hitouts, and fourth-term a goal.

The AFL Academy member produced arguably his best performance of the season to-date, dominating the airways up forward and providing a presence in the ruck in relief of teammate Zac Phillips. As usual, Smith was the Eagles’ number one target in attack. They looked to centre the ball for him inside 50, allowing him to run and jump at the ball and use his contested marking strength to advantage. A prime example of this came in the just minutes into the clash, when Smith took a strong grab then converted the resultant set-shot from close range.

However, aside from his strong aerial presence, Smith’s cleanliness at ground level, quick and effective distribution by hand, and willingness to crack in and tackle hard was impressive. He spent more time in the ruck against the Redlegs than in previous weeks and fought well against Nathan Hearing, combining particularly well with teammate Harrison Dawkins at stoppages. The key forward finished with 15 disposals, two goals, five marks (two contested), nine tackles, ten hit-outs and four inside 50s.

Again starting as the Eagles’ primary target up forward, Smith showed nice glimpses of his best form with strong marks, taking the ball at its highest point. He looked ominous on the lead at times and is difficult to defend at the Under 18 level on account of his height and reach on the lead. With good delivery, he was granted goalkicking opportunities but failed to make the most of his set shots. By the fourth quarter, his confidence may have been a little shot as he opted to kick inboard from 20-metres out, which got him a goal assist nonetheless.

The second of WWT’s bigmen, Smith played as a permanent forward and looked the most likely aerial target afield. He started strongly with a nice contested mark in between two opponents, but went on to miss a couple of set shot opportunities in the first term. What was most impressive about Smith, contested marking aside, was his ability to impact the play after aerial contests, with solid tackling efforts and touches at ground level adding a handy dimension to his game. His return obviously did a lot for the Eagles side, despite only booting three behinds from his 10 disposals and five marks (three contested).

The other big Henry to ruck for Team Dal Santo – Smith actually showed more up forward with a strong contested mark and set shot goal in the first quarter. The Woodville-West Torrens prospect, as good as he looked overhead, also had a great pickup in the middle of the ground which was excellent for a 200-plus cm player and if he could improve his aggression in general he could prove to be a hard player to stop at the next level.