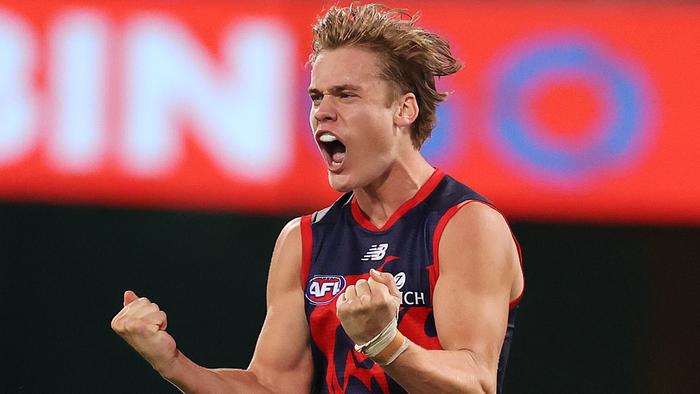 THE NUMBER of recruits from the 2019 AFL Draft to run out for their respective teams on the weekend spilled back into double digits, despite a few youngsters being squeezed out of senior selection. There was plenty to take out of Round 16 for the class of 2019, with a bunch of up-and-comers continuing to stamp their mark on the competition. We take a look at how the best handful of them performed.

It is hard to believe that Green has only managed five AFL outings in his debut season, but he again made the most of some movement among the GWS midfield. Last year’s number 10 pick racked up a game-high 30 disposals, dominating at the coalface with 21 contested possessions and four clearances. His extraction work in-close was on point, and Green looks as comfortable as any first year inside midfielder in recent memory. His 191cm/89kg frame aids that, but the GIANTS Academy graduate proved he is more than just a brute with his game on the weekend.

Another high-end draft pick, Anderson continues to thrive despite somewhat of a taper in Gold Coast’s form late in season 2020. Having cut his teeth on the outside, the Oakleigh Chargers product has transitioned well to a more inside-oriented role in the back half of his debut campaign. It is a position where Anderson’s penetrative kick and forward thinking comes to the fore, as he sets his side on the front foot from midfield. Anderson also got his hands on the ball plenty of times once again, just reaching the 20-disposal mark and allowing the SUNS to enter dangerous areas.

Pickett has been ultra impressive in his maiden senior campaign, and again proved a thorn in the opposition’s side in Round 17. The Demons sought a small forward with their selection of Pickett, but have received much more than tackling pressure and goal nous, as the South Australian also continues to prove his class with ball in hand further afield. He is often as creative and productive forward of centre as any player afield, but his radar was a touch off in front of the big sticks as he managed 1.3. The all-action prospect will undoubtedly put bums on seats in future.

The hero of an astonishing Melbourne triumph, Rivers is beginning to flourish in more advanced roles among the Dees’ set-up. A slider in last year’s draft, the West Australian is proving those who overlooked him wrong as one of the more seamless draftees to make the AFL transition. His ability to run, gun, and penetrate from behind the ball is already a known quantity, but add some scoreboard impact and midfield minutes from his latest outing, and you have a player with serious upside. His clutch goal late in the piece sealed Melbourne’s win, keeping its finals hopes alive with one round remaining.

Adelaide pulled off a third-consecutive win over the weekend, booting Carlton out of finals contention and sending off Bryce Gibbs in style against his old side. The rebuild has proven long and strenuous throughout 2020, but the green shoots are beginning to appear, with the likes of Schoenberg reaping the benefits of added exposure at AFL level. Accustomed to contesting against mature bodies, the South Australian was productive both on the inside and outside of midfield. His clean hands and disposal, combined with solid defensive output at the contest make for a well rounded midfield package, which he again proved to be in his seventh senior game.