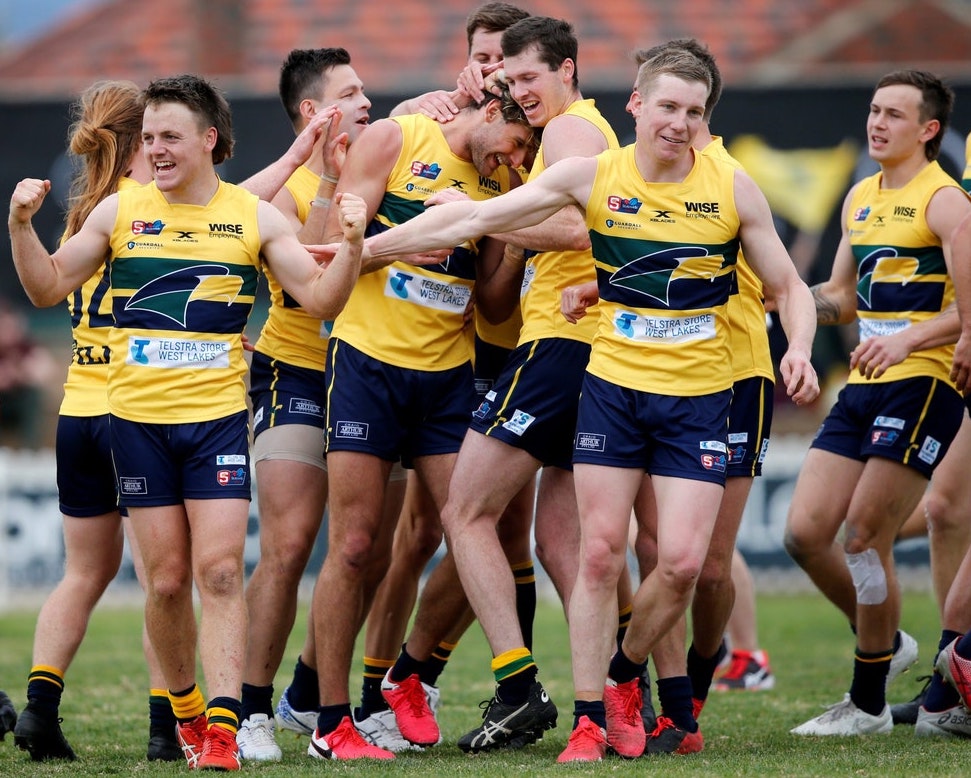 WITH young guns impressing at state league level around the nation, we again narrow our focus for this week’s South Australian National Football League (SANFL) wrap to the performances of youth throughout all three grades. There is plenty to unpack in our third altered edition, with Under 18 prospects scattered across the two senior competitions, and a bunch of youngsters impressing in the junior grade in Round 12.

Woodville-West Torrens (WWT) is again the talk of SANFL town, after drubbing reigning League premier, Glenelg by 78 points to put one hand on the minor premiership. 19-year-old Lachlan McNeil was again terrific among a raft of key Eagles ball winners, collecting 24 disposals in the win. Port Adelaide Next Generation Academy (NGA) candidate Lachlan Jones contributed to the defensive effort seeing the Bays held to just four majors, and he even added a huge specky to his highlight reel. Fellow defender Rhyan Mansell managed 14 touches, but comes under an injury cloud at the unideal time with his Achilles complaint. Glenelg’s Luke Parks (13 disposals, six marks) and Callum Park (14 disposals, nine rebound 50s) were both kept busy down back in the heavy defeat.

2020 AFL Draft hopefuls Luke Edwards (Glenelg) and Caleb Poulter (WWT) battled it out in the Reserves, as the Eagles again came away comfortable winners. Fellow Under 18s Cooper Horsnell and Ty Murphy have also enjoyed two’s berths for the Bays, along with Victorian mainstay Mitch Martin and 18-year-old Brady Searle up forward. WWT midfielder Harrison Dawkins was also named for a well-earned promotion. While the Eagles have already secured finals qualification across both senior levels, Glenelg’s youngsters like Edwards, Horsnell, and Murphy could spill back into the Under 18s side should the Tigers sneak into the top four there.

Speaking of the Under 18s, the Eagles pulled off a hat-trick of victories over their yellow and black counterparts, securing a thumping 93-point win on Saturday. Port fans will be buoyed to see father-son prospects Jase Burgoyne (2021-eligible) and Taj Schofield (2020) lead the ball winning stakes with over 30 disposals each, as both also hit the scoreboard in their midfield rotation. Max Litster (29 disposals, seven clearances, one goal) was again prominent, while bigmen Henry Smith and Zac Phillips both managed two goals apiece. Frazer Bradley (26 disposals, six marks) found the most ball for Glenelg, while Kye Dean and William Watts continued their solid form.

Elsewhere, South Adelaide and North Adelaide both bolstered their spots in the top four; as the Panthers preyed on Westies, and the Roosters crowed in a win over Central District. Daly Andrews’ promising start to SANFL League life continued with another 16 disposals and one goal, while 17-year-old Jason Horne was terrific for 15 touches and a major of his own in the Panthers’ victory. 2020 National Combine invitee Thomas Highmore also made a steady return from injury. North Adelaide key defender Dyson Hilder, whose League return saw Karl Finlay go the other way, was solid with 11 disposals and seven marks as his Roosters got up.

There was also some good talent running around for the Panthers at Reserves level, with another National Combine invitee in Phoenix Spicer among them. The speedy small forward/midfielder booted two majors and was among his side’s best players as South romped to a 71-point win. Draft hopeful Zac Dumesny was also listed to make his return from injury in the two’s. Prolific Westies midfielder Bailey Chamberlain narrowly missed League selection, but was part of the Reserves squad alongside Jye Sinderberry. Leading prospect Riley Thilthorpe was billed to slot back into the League lineup, but was a late scratching on account of his niggling groin complaint.

The Bloods’ Under 18s made South Adelaide earn its victory, pushing the Panthers for most of the game. Michael Laudato and Zac Venning combined for 54 disposals, 20 marks, and 12 rebound 50s in a busy defence, while Cade Kennedy and Dylan White worked hard through the engine room with over 20 touches and seven clearances apiece, and Luke Young snared three goals up forward. South’s depth proved too strong though, as the likes of Max Clifton, Luke Mitton, Dylan Brown, and Liam Hamilton all proved productive, while draft bolter Brayden Cook booted two goals and Nick Kraemer finally got back on the park.

Like the Panthers, North Adelaide enjoyed a big Under 18s win of its own, downing Centrals to the tune of 94 points. Among the goalkickers were Kyle Brazell and Matthew Borg, who each also found plenty of the ball, while bigmen Leo Coates (four goals) and Isaac Keeler (two) also impressed. There were no multiple goalkickers for the Bulldogs with some classy personnel missing, though Wyatt Ryan put in another mammoth performance with 26 disposals, 11 marks, and 32 hitouts. Lachlan Grubb was also an outstanding performer at Reserves level, booting five goals in Centrals’ win.

Back in the League frame, Norwood kept its finals hopes alive with a razor-thin win over Sturt, won off the boot of VFL recruit Nikolaus Rokahr. The Redlegs have been hampered by injuries, but that has only allowed youngsters like Daniel Fairbrother to get an extended run at senior level. He collected 19 disposals in his third senior game. Sturt swingman and potential Adelaide NGA prospect James Borlase missed due to school football commitments, though Tom Lewis continues to impress having gathered 18 disposals in the loss.

The Doubles Blues rocketed clear atop the Under 18s ladder as well, demoting Norwood to third with a 56-point triumph. Unsurprisingly, Tom Powell collected a team-high 33 disposals, but was outdone by Norwood’s Michael Cavallaro (34), who returned from Reserves duties. Ben Ianniello, who also has Reserves experience, collected 28 touches for the Redlegs, while Cooper Murley again ticked over the 30-mark. Henry Nelligan was also terrific with three goals from 26 touches despite the loss. He was one of the unlucky players to miss out on a National Combine nod though, alongside Sturt’s Mani Liddy, who contributed 24 disposals and a goal.