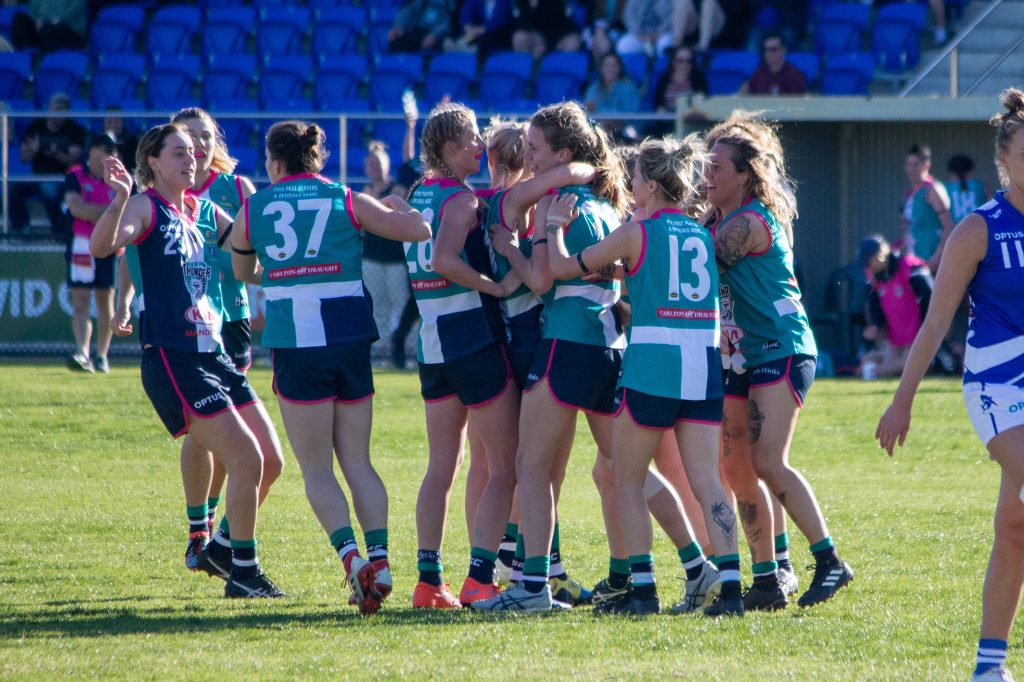 A MATCH-WINNING performance in the final term by 15-year-old Ella Roberts has helped book Peel Thunder a spot in the West Australian Football League (WAFL) Women’s Grand Final. The talented teenager who does not turn 16 until December, broke the game open in the last seven minutes to slot two terrific goals and help her side record a 9.1 (55) to 5.8 (38) victory over reigning premiers East Fremantle in the preliminary final. She was one of many players to stand up when it counted, as the young Thunder outfit was able to answer each challenge set down for them by the experienced East Fremantle outfit, and ran out the stronger side to book a rematch with Subiaco next week.

It was East Fremantle that started stronger, kicking with a breeze that enabled the Sharks to control play in their forward half. The Thunder had just two inside 50s for the quarter – the first and last of the term – and could not put a score on the board. The Sharks could, but seemingly wasted some golden opportunities to put together a strong first term lead. They booted 1.4, with the first goal coming in the 14th minute after three behinds. A nice kick inside 50 was well read by Rosie Walsh who ran onto it, grabbed it cleanly goalside and put it home from 15m out.

Cassie Davidson and Tanisha Anderson were holding up well in defence, whilst Gabby O’Sullivan was looking her usual dangerous self, even if she had contributed the couple of behinds. Shot after shot just missed for East Fremantle, and despite their dominance, and the work of Sharon Wong around the ball and Madeline Ross, Lily Bird and Ruby Schleicher through the middle and half-back respectively, East Fremantle only held a 10-point lead at the first change.

It had been a dire scrap in the opening term with Peel holding on against a fierce East Fremantle attack, but that soon changed with a nice kick in from youngster, Courtney Rowley who hit up Krystal Carter inside 50. Carter was awarded a free kick for in the back, then went back and drilled the shot just three minutes into the contest. Schleicher was continuing to do well in her one-on-one, but a couple of unlucky moments for the Sharks – which saw Schleicher rested on the bench and Katelyn Catalano come hobbling off – allowed Peel to take some control.

Schleicher’s opponent Kate Bartlett stepped up against a smaller opponent to mark off an Ebony Bilcich kick inside 50 then convert an important goal in the ninth minute of the term to give her side the lead for the first time. Her confidence was sky high, and a moment later she read the horrible bounce for Schleicher better, scooping it up and spotted a loose Bailey Molloy all alone 40m out. Molloy went back and nailed the set shot too, and midway through the term, Peel was really cooking. But the Thunder were not done just yer.

Three minutes later, ongoing pressure from the Peel forwards forced a quick kick from a Sharks defender to go out of bounds and Bartlett sprinted to the boundary line to receive the free kick. From 50m she wheeled around and launched home, with the pack misreading the kick to fall short and it bounced over the back and home without a hand to it. All of a sudden, Peel was 13 points up and making East Fremantle pay for the wasteful first term.

It was not all bad for the Sharks, who got one back after new inclusion, Jessie McDonald got lively and hit up O’Sullivan leading out 35m from goal. The talented forward made no mistake with the set shot, just escaping the hands on the line and with five minutes to play, the margin was seven points. O’Sullivan almost had another goal after taking advantage from a Walsh free to play on, but uncharacteristically went for the dribble and missed for her third behind of the day. It followed on from a Larissa Versaci miss moments earlier, and despite East Fremantle doing all the attacking late, it was Peel that would emerge five-point leaders at half-time.

Determined to make the most of the wind the second time around, McDonald again got busy, with clean hands to handball over her shoulder between two Sharks and hit up the running O’Sullivan. With her fifth scoring shot of the day, O’Sullivan made no mistake on the run and put it home to return the lead to the reigning premiers. The first six minutes belonged to East Fremantle as the visitors continued to pepper the goals and lock the ball inside 50. Once the game opened up, Peel raced it down and Carter won a free kick at the top of 50 and kicked to a pack.

Reading the ball off hands, Peel’s leading goalkicker Kira Phillips – who had not touched the ball prior to that moment – snapped off the right quickly to put through another major for the Thunder and Peel took back the lead. It was Peel’s turn to take control of the forward half possession, but East Fremantle turned defence into offence, only for Ashleigh Gomes to get a horrible bounce and the Thunder clear to safely. Phillips almost created something out of nothing with a kick off the ground late in the term going to the Bartlett-Schleicher duel, which saw a free kick awarded for holding to the latter.

East Fremantle went forward, and Chloe Reilly managed to find Bird inside 50 who kicked to the top of the square where McDonald roved the ball to perfection and kicked her first of the game with three minutes remaining in the quarter. Setting up the last three Sharks goals, the debutant looked dangerous every time she went near it. Now holding the lead by a couple of points, East Fremantle added another goal for good measure after the siren with Sara Lewis paid a free for being held in the ruck stoppage, and sent it home to stretch the lead to eight at the final break. Unfortunately for Sharks fans, that would be the last score of the day for the reigning premiers.

The final term belonged to Peel Thunder, as East Fremantle made a positional change with O’Sullivan moved to a wing and playing a defensive kick-behind-play role to help with the Thunder breeze. In what was symbolic of the quarter to come, Roberts had a pinpoint perfect kick to Phillips who won a free kick 35m out and kicked a goal just over a minute into the quarter and immediately the Thunder were back within two points. East tried to attack, as both sides were willing and Maddy Ross came off after a heavy collision, while Kimberley Bowey took a few crucial intercept possessions dropping back to help the defence.

But the weight of numbers and forward pressure eventually won out for the Thunder, with another youngster in Rowley spotting Phillips one-on-one and hit her up well. The strong marking forward made no mistake for her third goal of the contest and Peel was back in front, albeit by just four points. Midway through the term, Jade Briggs – who had been getting busy through the second half in particular – had a snap off her left for it to trickle through for the Thunder’s first behind of the day. The margin was five points and the game was crying out for a hero from either side to break it open.

Enter 15-year-old Roberts. In the 14th minute of the quarter, she bustled her way forward, the ball was collected by Bartlett who with lightning hands, dished off to Roberts and off a step from 40m put it through and the Thunder players erupted. East Fremantle would need two goals to win, but Peel was still not home, they needed another. So Roberts delivered again. Scooping the ball up from 45m, under immense pressure from the Sharks, the talented teenager put it on the boot off a couple of steps and it curled around the post in an effort even better than her first. There was jubilation everywhere as the Thunder players mobbed her and even the coaching box and fans were starting to believe.

East Fremantle tried to attack in the last few minutes, but the work of Shannon Whale and Davidson in defence resulted in some vital intercept marks. The red-hot Roberts was thrown into the middle and then won a couple of touches in defence helping there. A late scuffle broke out in the Sharks’ forward pocket as tensions rose, but Peel was able to do enough to defuse the situation, and the game, by taking time off the clock. As if fittingly, Roberts would have the last kick of the game at half-back, kicking long as the siren sounded and Peel Thunder was through to their first ever WAFL Women’s Grand Final in just their second season.