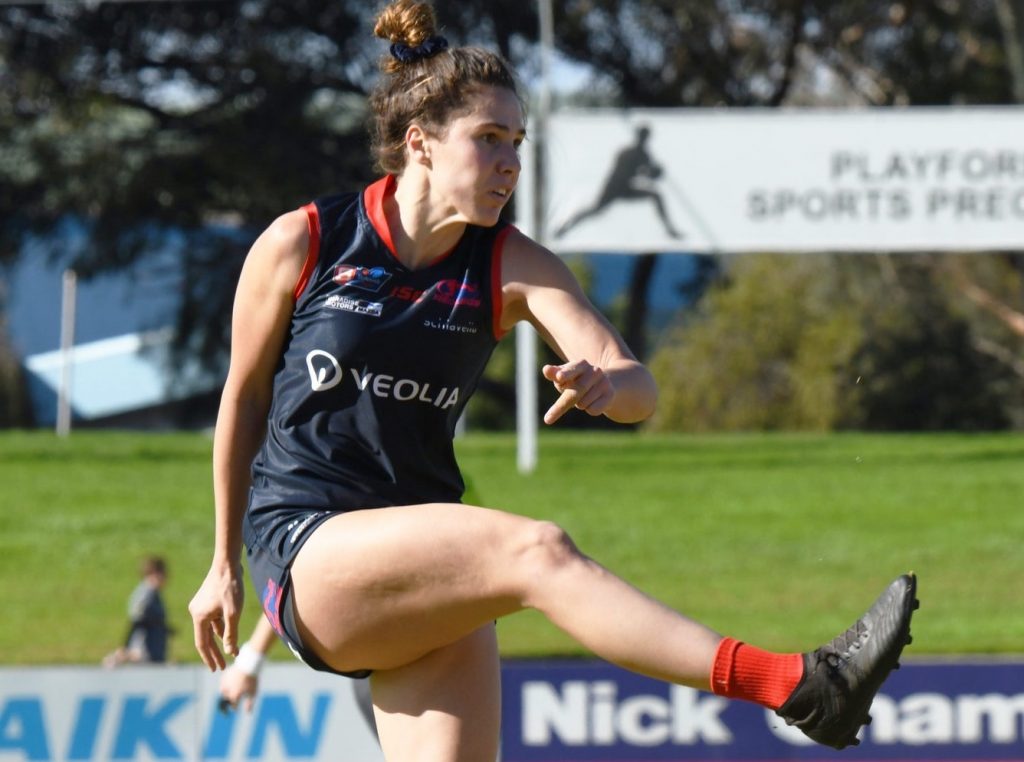 NORWOOD is the next team up in our South Australian National Football League (SANFL) Women’s season review series as we look at the eight sides in reverse ladder order and how their 2020 seasons went down.

The inaugural SANFL Women’s premiers went into the season after falling short in 2018 and going out in straight sets in 2019 following a minor premiership. They lost some key personnel over the off-season and looked shaky early, but picked up after the postponement period to really threaten some of the better teams. Whilst they did lose in their first final, the Redlegs had plenty of experienced and young talent come through the ranks, which showed in the All-Stars game last Friday night.

One of the standout rucks in the competition, Cutting was not only proficient at the stoppages, but provided a target around the ground, able to help out in defence or spread out to the wings to offer an option. Her strength overhead and body positioning is quite impressive.

Had a ripper second half of the season and showed during the All-Stars game what she offers with a fierce attack on the ball. She thrives in the contested situations and uses quick hands to dispose of the ball and allow her teammates to run off, or she can go forward and hit the scoreboard as well.

The key position utility became a regular in defence, with her booming kick and contested marking superb. Smith’s ability to read the ball in flight and chop it off, or kick long out of the danger zone was a feature of her game, and even though she did not spend a lot of time there, she can also play as a key forward.

A strong marking forward who was trialled further up the ground at times, but has the class and talent to be a really impressive player in the future. In her debut season for the League side, Halfpenny showed how difficult she is to beat one-on-one in marking contests with her ability to sum up the situation quickly and use good body positioning.

A middle-age talent who had a stellar season this year for Norwood and will benefit from her experience in the All-Stars game. Capable of playing as a forward or further up the ground, Lishmund always looks dangerous when around the ball and will be one to watch in 2021.

An accumulating midfielder who showed she can play as a forward too, Zander was able to regularly find the football around the ground and play inside or outside roles. With a high work rate and an ability to shake tacklers, Zander was a four-quarter performer nearly every match,

Reliable as ever, the experienced defender was a key cog in the Redlegs defensive unit and provided equal measures of offence and defence. She mopped up a lot of plays that went deep in defensive 50, and then provided drive off half-back, using her experience to guide her younger teammates.

Missed out on taking part in the All-Stars game, but put out a stellar season with a really improved year from the over-ager. Having gone through the pathways, Breed showed off her ability with some highlight-reel marks and match-winning performances with multiple goals. Capable of playing anywhere on the field, Breed is the ultimate utility.

There was no shortage of midfield depth in the Norwood side, with Adelaide midfielder Najwa Allen returning to the club she won a league best and fairest with after the break. She continued her dominant ball-winning ways, and teamed up well with fellow AFLW-experienced midfielder, Sophie Armitstead who also spent time in defence. Elisha Gallagher and Isabel Martin also showed promising signs this season, rotating through the midfield and holding their own.

Norwood had a strong season despite not winning a final again. They had so much change over the off-season they needed time to adapt, but showed in the later stages of the season they were starting to gel, and with a number of improving young guns coming through the team, expect 2021 to be another year to watch for the Redlegs.