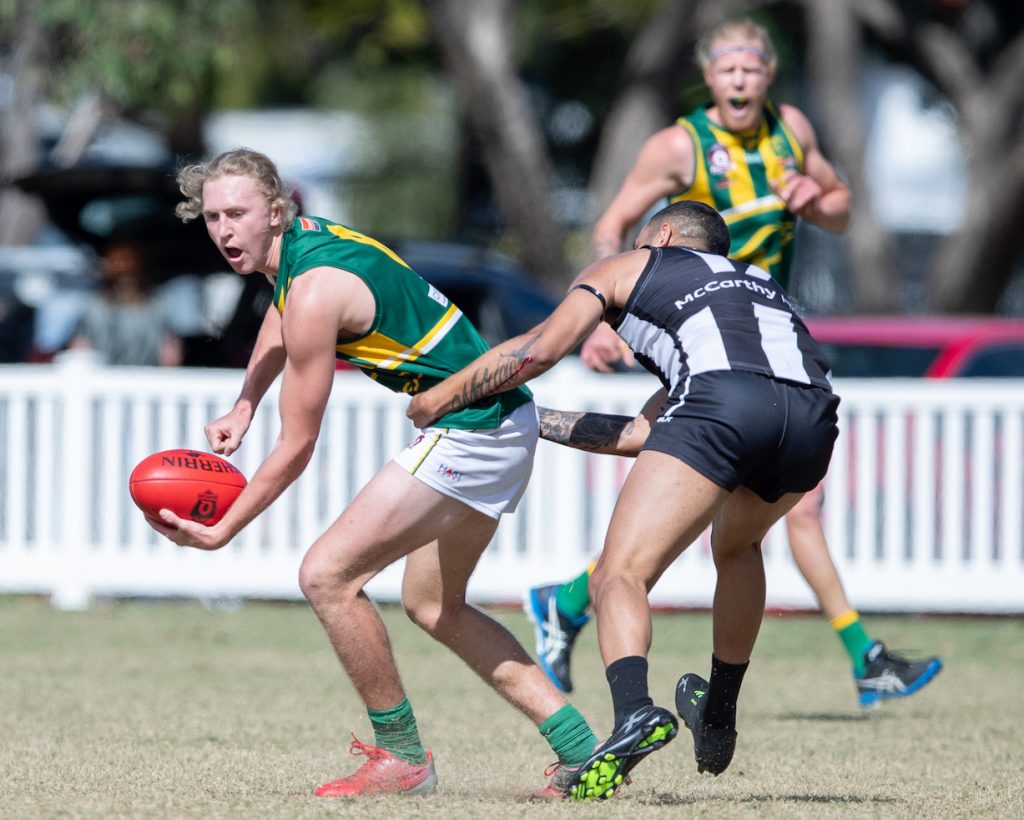 IN our latest edition of the Player Focus, we take a look at how Brisbane Lions Academy prospect Carter Michael fared in Maroochydore’s QAFL Elimination Final against Sherwood. Although his side went down by five points, Michael showed glimpses of why Brisbane fans should be excited about his potential. His strongest asset is his booming left foot kick, which makes him an ideal person to take the kick ins for his side. Most of his disposals in Saturday’s final came from kick ins as a result, but he had some effective moments in general play as well.

Despite spending time in the midfield during last week’s clash, Michael started this game on his customary half-back flank. He was in the thick of the action straight away, running past for a handball receive that did not quite him as he would have liked. Once the ball hit the deck, he dove into congestion to cause a stoppage. He started the game with a defensive approach, as he stayed very tight on his opponent and did not run off to provide an attacking option as much as usual. At a stoppage in the defensive 50, Michael won a contested possession but was immediately tackled for a ball up. A few minutes later, he ran hard in transition to pick up a loose ball in defensive 50, got the arms free of an oncoming tackler and dished out a handball.

After a Sherwood behind, Michael took the kick in and used his booming left foot to get the ball to a contest just in behind centre wing, and it trickled over the boundary line. He tried to be more conservative with his next kick in by going short to the pocket, but uncharacteristically he missed his target and it went out on the full. With his next one, Michael chose to go long to a contest down the line. Sherwood kicked 14 points for the match and Michael received 11 or 12 extra kicks as a result.

Late in the quarter, Michael started to get more involved in the game. Shortly after laying a solid tackle in defensive 50 to stop Sherwood’s forward momentum and force a stoppage, he ran around the back of a teammate that received a free kick and delivered a beautiful short pass to a teammate leading up on the wing. When Sherwood next went inside 50, he flew as a third man up into a marking contest to spoil the ball nicely over the boundary line.

Michael had a very quiet second term. He took a kick in at the seven-minute mark and went long down the middle and hit ruckman Jacob Simpson lace out. This kick was fantastic because it opened up the game for his side and cleared the defensive zone.

He also had a nice moment where he contested a mark at half-back, collected the ball with one take at ground level and then dished it forwards cleanly to two running teammates. This started a great passage of offensive transition play which resulted in a goal over the back of Sherwood’s defence. Although Michael did not have any impact for the remainder of the quarter, his side was playing well and went into half time with a 10-point lead.

Michael took another kick in early in the third where he went long down the line. Although it was marked by the opposition, this was because his teammate did not read the flight of the ball well. From his next kick in a minute later, he went up the middle and found a teammate in the centre square in between three Sherwood players. This was an incredibly difficult kick to pinpoint, yet he had the confidence to go for it (in a tight elimination final, no less) and executed it effectively which was outstanding.

His next kick was from an out-on-the-full free kick in the back pocket, from which he cleared the defensive zone and found a teammate on the wing. Although most of his kicks were great, at this stage they were all coming from behinds or other free kicks, which showed that Michael was struggling to find his own footy in general play.

At the 11-minute mark, Michael ran back to take a nice intercept mark in front of Sherwood’s Zane Lovell. He followed it up by delivering a nice short kick to a teammate on the wing. From his next kick in, Michael smartly ran wide to push the defenders in that direction before pulling his kick straight down the corridor to find teammate Thomas Holt. It was very windy at this point, so Michael’s ability to hit a flat 50 metre kick was very handy for his side coming out of defence.

Michael went up for another intercept mark in defence shortly after, but he and his teammate got in each other’s way. Fortunately for them, the crumber for Sherwood only snapped a behind. With that kick in, he went long to a contest on the wing. A few minutes later, Michael got a handball receive and fumbled it, but cleaned up his own mess and handballed back to an open teammate.

There was a lot of spice in the game late in this quarter, and the ball was consistently locked in Maroochydore’s defensive 50. Sherwood failed to take their chances though, so Michael had a couple more kick ins where he just went long to one-on-one contests on the wing. He and the other defenders held up well under immense pressure and got their side to three quarter time with a 20-point lead.

At the opening centre bounce of the final term, Michael came off the back of the square, collected the ball cleanly, used his pace to break away with a few quick steps and delivered the ball inside 50. This is the type of running play that Michael has done well in the last few weeks but did not do often on Saturday. After the next stoppage, Sherwood got the ball forward but Michael worked back to take the ball cleanly and dish it out the back to a teammate.

From a kick in, Michael found a teammate 50 metres away for an uncontested mark. This was an important kick to hit because Sherwood had just slotted back-to-back goals so his side was under the pump. At the 12-minute mark, Michael gave an important handball over the top to start a link-up chain for his side down the wing. Shortly after, he affected a spoil on his opponent that was leading up at the ball carrier. Michael had two more kick ins where he simply bombed it long down the line to a contest, which was definitely the safest option at the time given that his side was only up by a goal.

When Sherwood kicked another goal and took the lead, Maroochydore’s coaching staff immediately threw Michael into the midfield. This demonstrated how much trust they have in him as a young player, and he rewarded them by having a decent impact in there. He got a couple of quick touches, rushed an important kick forward and applied good body pressure on the opposition. On the back of good midfield work from Michael and others, Maroochydore had multiple shots on goal and took a one point lead late in the quarter. However, they could not capitalise on the hard work by kicking a goal.

Sherwood and former Brisbane Lions player Ryan Harwood then kicked a miraculous goal from a stoppage in Sherwood’s forward pocket to put them five points ahead. A few minutes later, the siren sounded and Sherwood ran out victors in a thriller.

Competing in an elimination final at League level will prove valuable experience for Michael, as this level of football is not something that many young prospects get exposed to. His skills were typically outstanding throughout the game, and there is no doubt that his left foot will be a major weapon at any level of football that he plays. He has shown in recent weeks that he is also a good contested player, but he did not get many opportunities to showcase this on Saturday. In saying that, it was great to see Michael get some midfield time late in the contest after his inspired bursts in that role last weekend. Although half-back is probably his strongest position at this stage, he has a great size and speed that could help him become a very effective midfielder in the years to come.