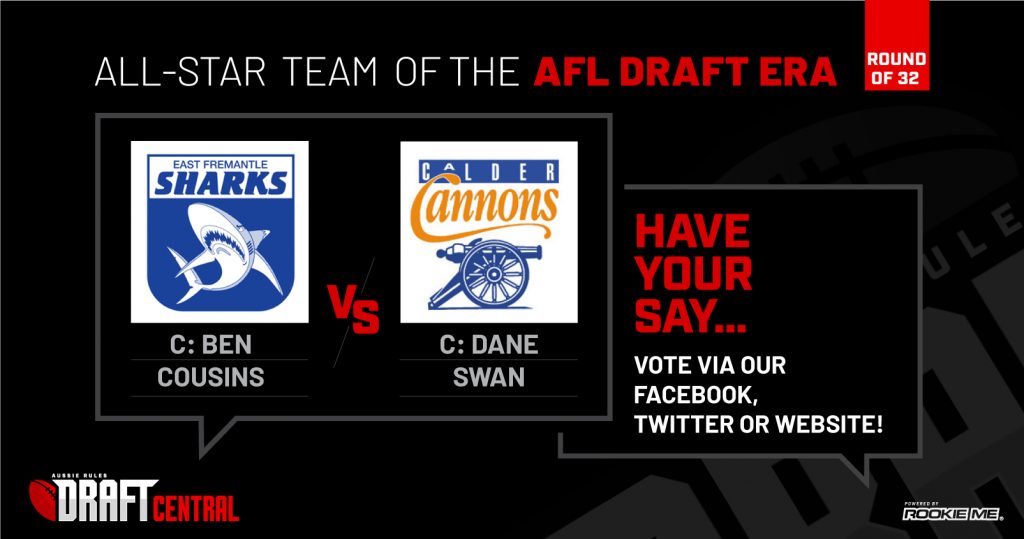 OUR next All-Star Team battle is the first of the Round of 16, which features a West Australian club and a Victorian club in East Fremantle Sharks and Calder Cannons. The two captains voted in by the public as the All-Star Players of the AFL Draft era were Ben Cousins (East Fremantle) and Dane Swan (Calder Cannons).

East Fremantle are the top seeds and tournament favourites that enter the All-Star Team matchup after a first round bye to take on the 16th seeds, Calder.

Where do you begin with East Fremantle? The most consistent team across the board with experience galore. The least experienced player is Carlton gun, Patrick Cripps and they have 200-game Brownlow Medalists and best and fairest winners on the bench. The onball brigade of Aaron Sandilands, Simon Black and Cousins – with Cripps – is just madness and then throw together a consistent defence, and a couple of key talls, and you would have to be really picky to find a weakness.

Calder’s strength is its depth across the field, led by Swan in the midfield, who along with Jude Bolton and Dion Prestia, make it competitive against most sides, though even they would be overpowered by the Sharks onball group. Their small forwards could cause serious issues for the Sharks defenders, with the likes of Ryan O’Keefe, Paul Chapman and Eddie Betts all capable of giving grief to defender.

As we said above, it is hard to really pick out a weakness, and to do so is getting rather picky, but you could argue the medium-small forwards with the mids predominantly playing forward, and Darren Bennett and Jamie Cripps the only real pure forwards from that perspective.

Calder probably lacks a consistent key position forward, with Joe Daniher and Jake Carlisle capable of anything, but not as consistent as those on the opposition side. They also have some strong defensively-minded backmen, but not as potent offensively off the defensive line though Brandon Ellis coming off the bench would certainly help with this fact.

East Fremantle could win the entire All-Star Team of the AFL Draft era, with the Shakrs raging favourites against most sides, and whilst Calder is good, East Fremantle is elite.

Which All-Star Team are you picking?
Quiz Made here