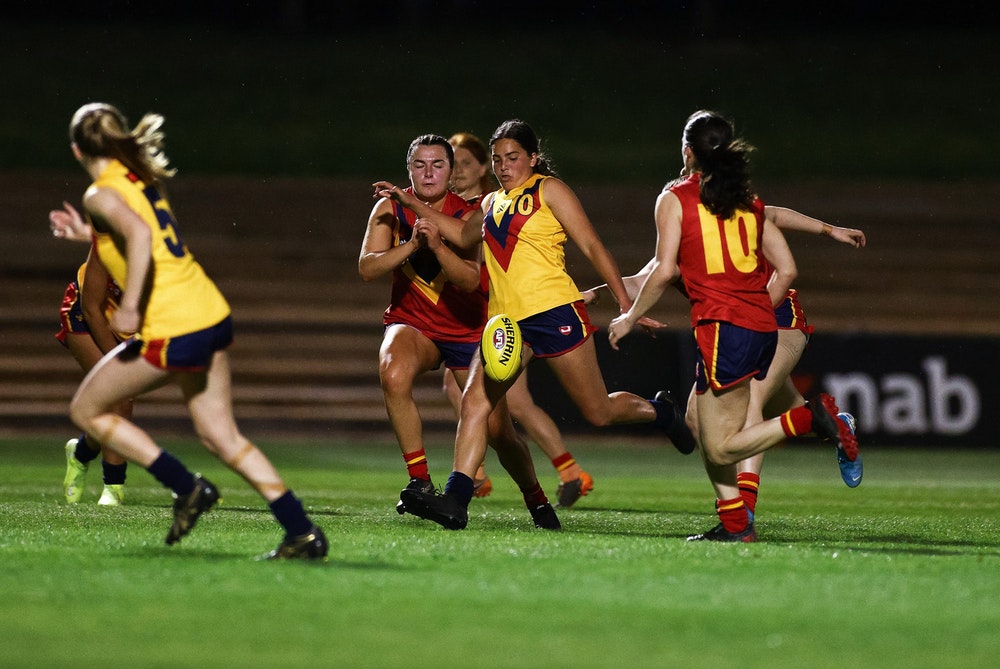 BOOTING five of the final seven goals of the game, Team Marinoff enjoyed a come-from-behind victory over Team Hatchard in the 2020 South Australian AFL Women’s All-Stars match on Friday night. Under lights at Thebarton Oval, both teams put on a high quality game which featured the top AFL Women’s Draft hopefuls from across the state. Whilst Hatchard flew out of the blocks with three of the first four goals to lead by 14 points at quarter time, the yellow side kicked just six behinds for the rest of the game, as Marinoff piled on 5.1 in that time to run out 6.1 (37) to 3.8 (26) winners.

Whilst the result itself was clearly arbitrary fo the showcase of skills from South Australia’s best non-listed AFL Women’s talents, it did not stop players going in for a real crack across four quarters. In what was an even team performance, some of the standouts from Marinoff included Sturt’s Alex Ballard and North Adelaide’s Kristi Harvey who both controlled the defence. Central District’s Madison Lane worked into the game to being among the best, as was Norwood’s Jess Macolino through the midfield. For Hatchard, Alana Lishmund was a standout and remarkable for her age – having turned 17 last month – while Glenelg’s Grace Duffy, and other middle-age draft talents Zoe Venning and Brooke Tonon were also strong up forward.

The game started all on Hatchard’s terms with the booming kick of Amber Ward setting the yellow side up with an end-to-end play for Tonon to run onto it. About eight minutes later, Marinoff responded with its only goal of the first term through Brooklyn Kraft with the top-age ruck-forward winning a free kick and popping through her first of the night. Not to be outdone, Tonon got clear again after a long kick from Hannah Prenzler, and a 1-2 from Tahlita Buethke and Cristie Castle got it to the teenager to run on and nail the goal. Two minutes later, another talented teenager in Lishmund received the handball from Castle and did not let her down with the quick kick and goal. Whilst Venning had a number of chances in the first term, they kept falling short.

Despite the best efforts of Emma Smith, Marinoff could not get the ball moving deep enough, though the likes of Harvey and Bella Smith were holding up the defence. Tesharna Maher was getting her running game going, whilst Leah Cutting was doing well around the ground outside the stoppages. The experience of Ash Woodland was helping Hatchard, while Matilda Zander and Czenya Cavouras were winning plenty of the ball through midfield. At quarter time, the margin was 14 points in favour of Hatchard.

The second term was a reversal of the first as Marinoff kicked the only two goals of the quarter, and both came late. For the majority of the term, it looked as if Hatchard would remain in front off the back of some great work from Prenzler and Tahlia Meyer, with Isobel Kuiper getting involved through the middle. Alex Ballard remained a thorn in the side for team Marinoff, as she and Bella Smith were vigilant in defence, and the likes of Shelby Smith, Lauren Gauci and Tessa Kohn were all having an impact.

It was Gauci and Kohn who combined to get the ball to Jess Kirk, with the South Adelaide leading goalkicking positioning herself well at the top of the goalsquare to protect the ball drop then kick the regulation set shot 13 and a half minutes into the quarter. Not long after, Shelby Smith did well to stand up in a tackle, and with youngsters Huynh and Laura Clifton combining, gifted the latter a running goal from 40m to draw within two points at the main break.

The third term is often referred to as the premiership quarter, and it was certainly where Marinoff got the job done. They booted three goals – in fact the last three goals of the game – to not only take the lead, but race away to a 15-point advantage themselves. Jorja Eldridge had her moment by keeping front position at the top of the square, and the fend off from Macolino, handball to Huynh who fired it to Kohn for the quick snap landed in Eldridge’s arms. She went back and converted the set shot for Marinoff to hit the front for the first time. They never gave up the lead from there.

Eleven minutes into the quarter and Kraft won a fortunate free kick after trying to take on the tackler, slipped and the tackler fell in her back for a free kick 20m out straight in front. She popped through her second with such fluency, and the red team had some breathing space. When Macolino won a free kick in the last minute and then nailed the set shot from 35m, Marinoff was out to a 15-point advantage and looking incredibly good. It was off the back of Macolino’s stoppage work, and the run of Lane, Gauci and Katelyn Pope who were all influential in the term. For Hatchard, Buethke had really had an impact, while Erin Sundstrom, Duffy and Lishmund were again prominent.

The final term was an arm-wrestle predominantly in Hatchard’s forward half. With a number of injury stoppages and a few casualties from the game, the quarter went into the 23rd minute – six more than the intended no time-on 17-minute terms. Despite Hatchard kicking the only four behinds of the term – and realistically they should have edged a lot closer – Marinoff’s defence, once again led by Ballard and Harvey stood tall. Lane continued her form, working hard with Huynh on a number of occasions as the Central District teammates, along with Kohn were prominent.

For Hatchard, Lishmund finished off a terrific game, with Abbie Ballard, Duffy, Venning and Tonon all amongst the best again in the last term. The last kick of the game was a poster and fitting that Hatchard had got so close to kicking a major in the term, but fell agonisingly short. Overall, the showcase was a success with plenty to take away from the contest.