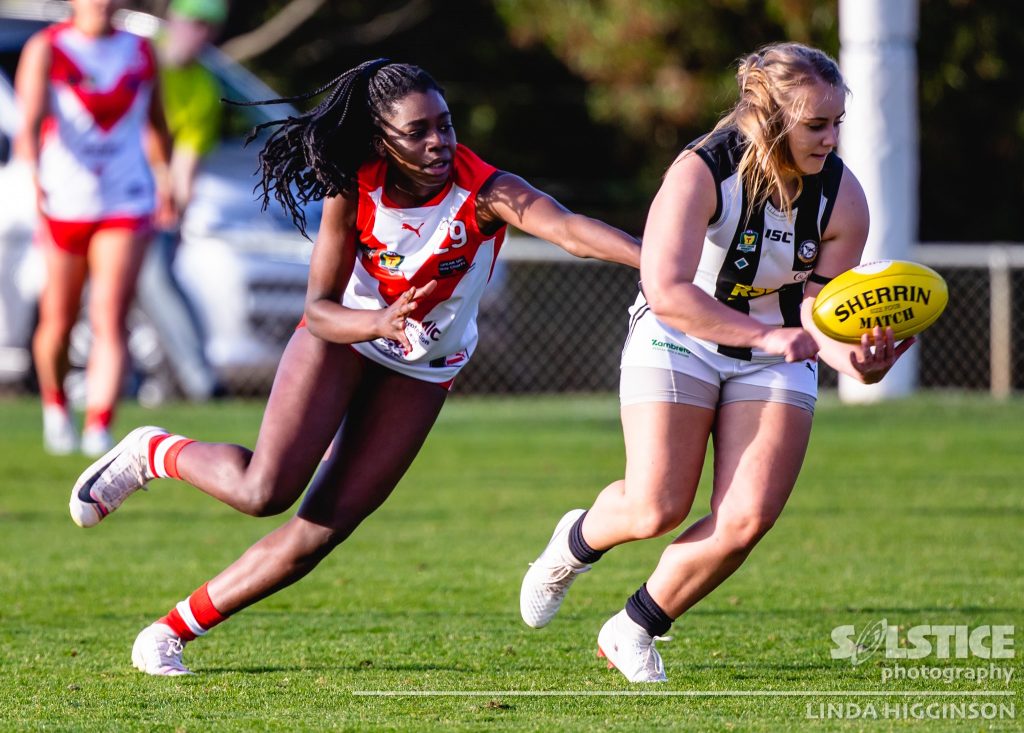 GLENORCHY and Clarence can officially rule out finishing outside the expected top three spots with Round 9 wins in the Tasmanian State League (TSL) Women’s competition. Whilst dropping outside the top three would nearly be impossible as is, victories to the Magpies and Roos just make it mathematically impossible, especially given the matches are against the bottom two sides in Tigers and North Launceston respectively.

First up, Glenorchy hosts Tigers at KGV with the Magpies’ confidence sky high off the back of a remarkable second win against ladder leaders Launceston. The Magpies are yet to beat the second place Roos, but easily too care of Tigers back in Round 3 with a thumping 85-point victory. Since then, they have only lost one match – to Clarence by 12 points, so have strung together four wins from five games ahead of a double-bye in Rounds 10 and 11. This match will be the last time the Magpies will play in almost a month, with the next clash against the Bombers on October 3.

Tigers are so far winless in season 2020, and their highest score came against North Launceston, which was 1.2 (8). After only scoring a behind in their first match against Launceston, they have kicked a goal in each of their past four games. The Tigers have also reduced the average points against, going from 86.5 conceded in the first two rounds, to a much lower 54.3 points per game. Coming in against Glenorchy, Tigers will hope to do better than their Round 3 defeat of 85 points. Having had their double-bye the last two weeks, Tigers have three consecutive games – against Glenorchy, Clarence and North Launceston – before finishing up with a final round bye.

Sarah Skinner has been so damaging up forward this season, booting 11 goals, including a haul of four against the Tigers in their last encounter. She has made it into the black and whites best on five occasions, while Molly Mitchell has converted eight goals this season. Tiarna Ford (six goals) and Elise Barwick (five) both had big days out against Tigers too, booting three goals in that 14-goal win. Whilst not notable goalkickers, Zoie Crawford (one), Jemma Webster and Libby Haines have all been named in the bests at least four times and are among Glenorchy’s top performers this season.

For Tigers, they have had the four individual goalkickers in Brooke Phillips, Lilly Ellis, Phoebe Parsons and Priscilla Odwogo. Hailee Baldwin, Mikayla Absolom, Mimosa Middleton Miller and Odwogo have also been named among the best for the Tigers on three occasions, having consistent years in the yellow and black. While Tigers have been improving and come off a long break, expect the Magpies to be far too strong in this contest.

In the second match, the 4-1 Roos host North Launceston as Clarence looks to keep in touch with top of the table Launceston. The Magpies did the Roos a favour by knocking off the Blues last week, not completely ruling Clarence off finishing on top, especially given they are only four points behind with two games in hand. The reigning premiers are a dangerous side, and whilst they did lose to the Blues a few weeks ago, were able to topple the Magpies in between two byes in the past three weeks. Having only played the five games, they still have three more to go, with North Launceston, Tigers and Launceston coming up, the latter of which is the Blues last remaining game – effectively deciding the minor premiership.

North Launceston has only had the one win – against last placed Tigers – but competed against Glenorchy a few weeks ago, and kept Launceston to just four goals in the opening round of the season. The top four make finals so expect the Bombers to be there at the pointy end of the season, but an upset of the Roos would be a huge scalp. They have another bye next week – coming off a Round 8 bye last week – and then finish the year with games against Tigers and Glenorchy prior to finals.

Jessie Williams had a massive day out against the Tigers this season to boot seven majors and lead the Roos with 12 majors this season. Amy Edmand (seven goals) also booted four in that game to put the last placed side to the sword, but it was Jacinta Limbrick (five) who snagged four majors at UTAS Stadium in the last encounter between these sides that did all the damage. Young gun Amy Prokopiec kicked a couple of goals in the last match the Roos played against Glenorchy for a season total of three majors, while Nicole Bresnehan and Bronte Scott are among the top Roos this year.

The Bombers have had three multiple goalkickers this season with Maggie Cuthbertson (three goals), Bonnie Farrell (two) and Hayley Breward (two), while Sophie Townsend (one) is the other goalkicker. Jodie Clifford and Kayla Sheehan have both been named amongst the best on four occasions, with Cuthbertson (three) the other standout this season. While the Bombers will give it a red hot crack, it is hard to see Glenorchy not getting up in this game given what is at stake for the Roos in the final few rounds.