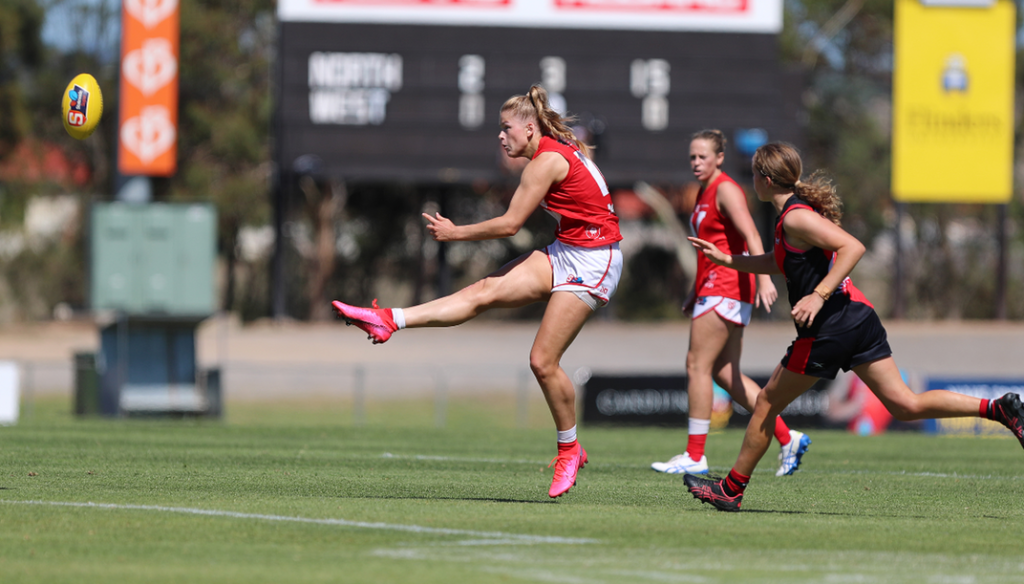 SOUTH Australia’s best young talents will have a chance to strut their stuff via the SANFL site tonight when 48 of the top talents from the state run around in an AFL Women’s All-Stars match. The teams are named after Adelaide stars, Anne Hatchard and Ebony Marinoff, with no AFL Women’s players, and those in their 16th year or younger playing in an under 16s showcase prior to this game.

For those Adelaide fans keen to get a glimpse as some of the players who received AFL Women’s Draft Combine invitations, unfortunately two of the brightest stars will no be out there. Teah Charlton will miss the game due to injury, while Indy Tahau is unavailable due to other commitments. The others two players who received Draft Combine invitations – Amber Ward and Ashleigh Woodland will both front up for Team Hatchard, coached by North Adelaide premiership coach, Krissie Steen. We take a look at our potential line-ups, though it is anticipated players will be heavily rotated all across the field.

With players being so versatile, it is hard to pinpoint a number of players and where they will slot in. For the purpose of our hypothetical 24, any middle-agers (2003-born or later) are automatically on the bench, giving preference to those who are eligible to be picked up this year. The exception to the rule is Zoe Prowse who is the standout ruck not only on the team, but on the field as a whole. She is still only 17, but stands at 180cm and is the obvious choice to be starting ruck.

Ward is a reliable centre half-back with terrific intercepting capabilities. She was one of the more unlucky players not to be picked up in her draft year last year, but she is strong, positions herself well and is extremely good by foot. At the other end, Woodland has already tasted AFL Women’s experience with Melbourne, and, while it did not work out, it is no surprise to see the now 22-year-old as of Wednesday, being considered after winning the competition’s leading goalkicker award.

Another former AFL Women’s player in Katelyn Rosenzweig will play at full-forward, and the forward half as a whole is something to watch, with Tamsyn Morriss and Hannah Prenzler all able to play further up the ground. Prenzler and Morriss are both top-agers who can switch to the opposite end if need be, with Prenzler’s work off half-back and Morriss’ kicking among their eye-catching traits. Abbie Ballard onball is the other top-ager to keep an eye on with her hardness and precision left foot winning plaudits.

Charlotte Dolan running off half-back and along the wing provides great speed and determination to any side, while Julia Clark has become a reliable defender who uses the ball well and makes the right decisions. Tahlita Buethke is another top-age player who cracked into the strong South Adelaide team this year and would have been one to watch – as a dominant goalkicker at local level – at the championships had they occurred.

In terms of mature-agers, Erin Sundstrom often plays off half-back but due to her height – 174cm – she is one of the few likely to play in a key position role. Given her work with Ward back there in the SANFL Womens and with Steen coaching, the pair will make a strong duo. Matilda Zander is a small, tough midfielder who attacks the contest hard and runs all day. She was in line to play for Collingwood in the VFL, and with her former coach Steve Symonds at the helm for the Magpies, expect him to be watching this game carefully.

Some others who have caught the eye this season include Crows’ train-on player Czenya Cavouras who racks up the ball and is hard around the contest, over-ager Isobel Kuiper who will provide good height in midfield, and then the run of another over-ager in Madisyn Freeman. Tahlia Meyer‘s decision making through midfield going forward is superb, winning the preliminary final off her own boot such was her skill. Cristie Castle is a reliable mark and source of goals up front, with Rhiannon Busch as steady as they come down back – though she has the versatility to play at either end – much like Grace Duffy.

Of the 2003 group outside of Prowse, Venning is the top one to watch, regularly dominating through the midfield and half-forward, using her speed and strength to cause headaches for the opposition. Alana Lishmund will provide some rotation up forward, with Brooke Tonon also spending time there, and Jamie Parish showing great signs in the second half of the season for the Eagles. Rayne Rivalland rounds out the prospects as the youngest player on the team – not turning 17 until late November – which shows the depth of talent within South Australia.

Turning our attention to Team Marinoff, coached by former international cricketer and North Adelaide footballer Emma Sampson, there are plenty of strong marking key position players in the line-up. Like with Team Hatchard, the 2003-born players automatically got named on the bench as they still have another year to show off their remarkable talents. While none of the players in this team got a Draft Combine invitation, there are some that have certainly showcased their ability at past AFL Women’s Under-18 National Championships.

At either end are the contested marking Bella Smith and Kiana Lee, with ruck Brooklyn Kraft likely to spend time forward given Leah Cutting – Norwood’s star ruck – has been named in the team. Kraft provides extra height to the team at 182cm and will stretch the smaller Hatchard backline. Also coming off championships last year, Alex Ballard often plays at half-forward but can play just about anywhere, the same can be said for Emma Smith who we have named on the wing. Teagan Usher and Tesharna Maher are great runners out of defence, and Maher particularly has got a set of wheels that make her hard to catch.

Of the top-agers, Latiah Huynh is a raw prospect with terrific speed, great defensive pressure and a strong hardness at the contest. She can rotate between half-forward and wing, and often be the link in the transition between midfield and forward. Also in their top-age year is Jade Halfpenny who can play in all thirds of the ground, but given she can take a grab and knows where the goals are, she has been named forward. Jorja Eldridge and Andie Zbierski are the other top-agers named, with Eldridge coming from a basketball background but did not manage to crack into the strong North Adelaide senior outfit, while Zbierski has played predominantly country footy and not playing this year in the SANFL Women’s but did play four games last year.

From the mature-age perspective, Kristi Harvey lines up at her usual full-back spot and she has plenty of experience having played for Carlton’s VFL Women’s side as well as the successful North Adelaide line-up. Another strong contested mark and rebounder, Harvey will be hard to pass in the defensive end. Also back there is Lauren Gauci who will team up well with Roosters teammate Harvey, providing good dash out of defence, while Tessa Kohn is a natural inside midfielder, but has been trialed elsewhere including in defence, and expect her to get a bit of a taste everywhere. On the wing, Katelyn Pope is one of the quickest going around and the Roosters’ speedster will be hard to catch where she gets going.

A couple of the big improvers in 2020, Norwood’s Jess Macolino returned for her second season, and Shelby Smith made her debut and was one of Central District’s most consistent players all year. They will not take a backwards step and match the Hatchard midfield in hardness for the ball. Up forward, Jess Kirk had led the goalkicking up until injury cost her, but she is good overhead and usually a reliable set shot.

Of the middle-agers on the bench, Gypsy Schirmer provided some nice highlights as an athletic tall up forward for the Panthers this year, while Madison Lane continued her good work after captaining South Australia’s Under 16s side last year, and been a strong contributor for the Bulldogs. Lauren Clifton can provide some depth anywhere on the field, playing defence, forward or even on a wing, while Kate Case is another midfielder who could be one to watch in 2020 after some strong performances through midfield.

Along with Charlton and Tahau, others who would have earned spots but were either injured on unavailable for the clash include: inside midfielders, dual league best and fairest winner Rachelle Martin and talented teenager Maya Rigter; the versatile Jaimi Tabb and athletic utility Mattea Breed.