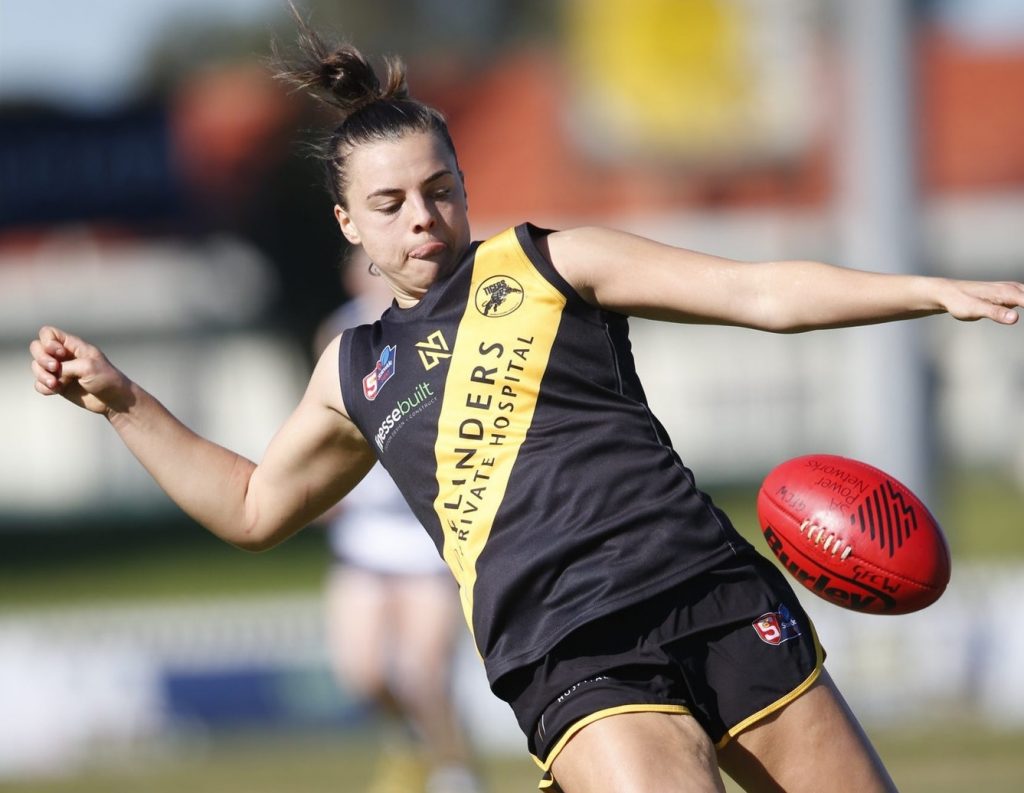 GLENELG is the next team up in our South Australian National Football League (SANFL) Women’s season review series as we look at the eight sides in reverse ladder order and how their 2020 seasons went down.

After going out in the first week of finals last year to North Adelaide, the Tigers had their sights set on making the four once again. Unfortunately a slow start really cost the Bays, who did not perform the way they would have liked to kick off the new season. They gained some quality players for the second half of the season, then copped all the top teams in the last six games on multiple occasions, making it difficult to really squeeze into the four. Overall they showed they could still score heavily, but it was not enough to get the job done.

A 20-year-old who was able to play in multiple areas across the field, she crossed from South Adelaide over the off-season and had a fairly successful year in the yellow and black. Often spotted in the forward half of the ground, Duffy held her own against more experienced opponents.

A talented inside midfielder who earned a Breakthrough Player nomination in Round 4 for her work in close, Kohn was trialled in multiple positions later in the season to much success. With the return of the AFL Women’s talents, Kohn spent time down back and down forward, but thrives off the contested ball and winning it around the coalface.

Claimed the club’s best and fairest this season to no one’s surprise given her consistency to play the ultimate team role. She provide good drive off half-back, was able to get up the ground and hold a firm line, and push through the midfield when required. Only an over-ager who played at the AFL Women’s Under 18 Championships last year so plenty of development left.

Vice-captain of the South Australian Under 16s side last year, Tonon made her debut in the yellow and black playing up forward where she kicked 1.2 in a 50-point win over Central District. Still lightly built, Tonon is able to have a crack and showed signs that there is plenty to come from her in the future.

Still only 18-years-old, Morriss has been in the SANFL Women’s system for a number of years now and a key component of Glenelg’s side. She does not need to win a heap of the ball to have an impact, generally using it well and providing good drive on the outside, forward.

Welcoming back AFL Women’s experience in Ebony Marinoff, Eloise Jones and Caitlin Gould was superb for the Tigers as it straightened them up with three players who could rotate between midfield and forward. Marinoff provided the hard edge on the inside, and Jones and Gould were strong marking targets inside 50, or bigger bodies around the stoppages. Others who stood out include tenacious mid-forward Sam Franson, reliable defender Ellie Kellock, and ruck-cum-defender Soriah Moon who had a sensational first season for the Bays.

The slow start cost Glenelg a finals spot, but no doubt had they picked up another win or two in the beginning then they could have made it real interesting in the post-season series. They had the talent both experienced and inexperienced to win games, and there is no reason why they cannot eye off finals in 2021, even without their AFL Women’s players who will unlikely be available in 12 months time.