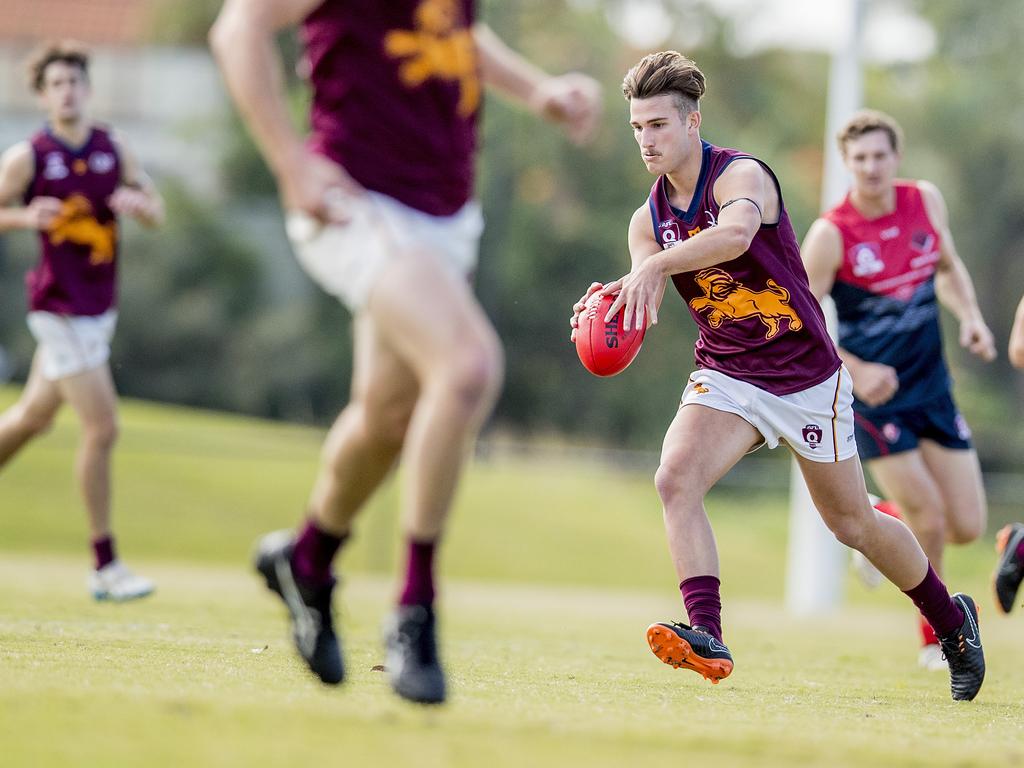 AFTER nine regular season rounds, finals time has arrived in the Queensland Australian Football League (QAFL), with the top six sides set to battle it out for premiership glory. Week one provides a pair of elimination finals, as Sherwood (4th, 4-4) hosts Maroochydore (5th, 4-4), while Palm Beach Currumbin (3rd, 6-2) takes on Mt Gravatt (6th, 3-5). Undefeated minor premier Broadbeach and second-placed Morningside (7-1) await in the semi finals stage, and have both earned a week off.

In a new-look QAFL preview, Draft Central narrows its focus to the young guns who will look to make a splash on the big stage this weekend. Get to know the prominent Brisbane Lions and Gold Coast SUNS Academy players set to take the field, as well as the other young prospects who have impressed over the course of the season.

Two sides with identical records will do battle as Sherwood takes on Maroochydore in the first elimination final, set to play out at McCarthy Homes Oval. The clash serves as somewhat of a reverse fixture to the clubs’ Round 6 meeting, which the ‘Roos won by 31 points on home turf. Despite that result, it’s the Magpies who hold a superior ladder position on account of their percentage buffer.

Bruce Reville is a name which jumps off the hosts’ team sheet, named at half-forward. An over-aged Brisbane Lions Academy member, Reville ran out in this year’s Academy Series in between his five outings for Sherwood. Listed at 185cm, Reville is a smooth moving and versatile prospect who can play both sides of midfield, and find the goals while stationed up forward. He proved as much with two goals against Labrador last week and his run-and-carry could serve to open up the contested nature of finals football.

Fellow Lions Academy products Jack Briskey and Connor Bulley have both been named as emergencies for the Magpies, while former academy ruckman Samson Ryan has been tasked with the ruck duties. Briskey, a promising athlete with raw potential, faces a fight to squeeze back into the side despite recently earning a National Combine invite.

Potentially a matchup for Reville on Maroochydore’s side is Carter Michael, one of the leading Lions AFL Draft prospects in 2020. The 187cm left-footer moves well and while he may start on the wing, can also move to half-back or into the midfield. Another couple of academy products will line up for the ‘Roos, with 19-year-old bigman Max McDonald named on the bench, while top-ager Ben Thomas slots in at half-back for just his third game at the level in 2020.

This game promises to be a cracker, with both sides evenly matched across the park and some young talent primed to make an impact. With even more prospects waiting in the wings for a late change, all of the aforementioned players could prove game-changers for either side.

Palm Beach Currumbin (PBC) will fancy its chances of advancing into week two of finals, but can take nothing for granted as Mt Gravatt comes to town. The Lions are the top-ranked side in action this week, and come up against the only finalist with a negative record. The Vultures will be up against it, especially given they went down to PBC by 48 points just last week.

18-year-old Liam O’Brien is among the young Lions to be taking the field, named alongside former Suns Academy midfielder Ashton Crossley on the bench. O’Brien is a state Under 16 representative who can craft on the outside, while Crossley provides a big body on the inside. The Lions have also named Riley Buckland, a promising 19-year-old who has played into some great late-season form and retains his senior spot. Ethan Hunt was not so lucky, listed as an emergency after seven top flight appearances.

Diminutive, but tough Lions Academy bottom-agers Lochlan Harrop and Sam Winterbottom are both set to line up for Mt Gravatt, named in the midfield and forwardline respectively. Harrop should bring some good hardness and versatility to the fore, while Winterbottom is a classy small who could wreak havoc inside 50. Others around the academy traps to be named include Ethan Kerr (interchange) and Zac Young (half-forward). While the deck is stacked against Mt Gravatt, the Vultures’ young talent should benefit from the finals experience, and give it a red-hot crack against good opposition. The Lions’ experience depth bode well for them after a solid regular season. They’ll be raring to go.